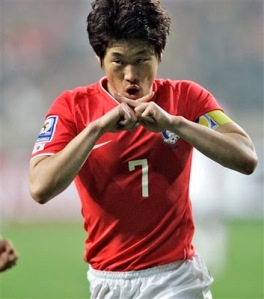 Korea has produced both in the past and currently many world famous sports people in a number of different disciplines. Here are a section of Koreas top current national sporting heroes.

Park Ji-Sung (박지성): Maybe the most famous and admired Korean sportsman ever. The Manchester United’s winger was the first Korean to win a champions league medal, along with Premier League, FA Cup and other titles and awards. He captained the South Korean national team at the 2010 world cup in South Africa and is an inspiration for many aspiring footballers from Korea and beyond.

Park Tae-Hwan (박태환): At only 18 years old Tae-Hwan won a gold medal at the 2008 Beijing Olympic games (one of 13 medals won by South Koreans). In a sport where Korea seldom figure winning a gold medal was a made him an instant hero.

Ryu So-Yeon (류소연): During the summer of 2011 So Yeon wrote her name on the global golf stage by winning the US Women’s Open Golf Championship, joining the likes of “Pak Se Ri”, “Ji Eun-Hee” and “Shin Jiyai” as grand slam winning golfers.

Choo Shin-Soo (추신수): Professional baseball star who currently plays for the Cleveland Indians in MLB. He has played in Major League Baseball for the past 7 years and is considered one of Korea’s greatest ever Baseball players.

There are many more important and talented Korean sports people both from the past and almost certainly there will be more in the future. Thank you for reading.