This is the final part of our Korean Alphabet Basics series, if you haven’t already please also check out “Part 1” & “Part 2”, so that you are up-to-date and ready to move forward with this part. 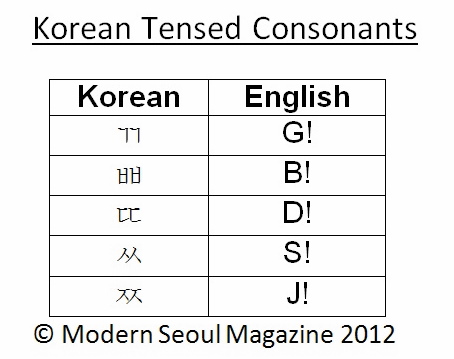 Now moving onto the Final Consonants, these come at the end of a Korean character and always after a vowel. Here is a list of the different final consonants and the sounds that they make:

As you can see there are 16 different final consonants but only 7 sounds as some sound the same. Here is a good example of why; take these to Korean words “빗” & “빚”, they sound exactly the same (Bit) however there meaning are different “빗” means Comb and “빚” means Debt. This is a similar to the words “Free” and “Three”, sound the same but have completely different meanings.

Finally we move onto the final aspect double consonants, which are less commonly seen in Korean writing but important to learn just in case you do come across a word which uses them. We used the “” Vowel as a base in this chart: 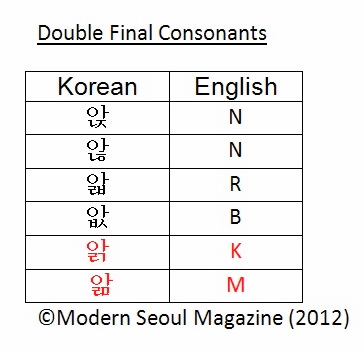 To explain with the black characters you read the first symbol and with the red characters you read the second symbol. As you can tell from this chart the double consonant is maybe the strangest and most difficult part of the Korean alphabet and aspect of reading Hangul. It takes practice and a good memory to learn them but if you practice it won’t take too long (hopefully).

The double consonant aspect completes this basic guide to reading the Korean Alphabet / Hangul; you should now be able to use what you have learnt in all 3 parts to be able to start reading Korean and so moving onto some basic vocabulary and more. Thank you for your time and if you haven’t already please check out this links if you’re interested in learning more Korean: