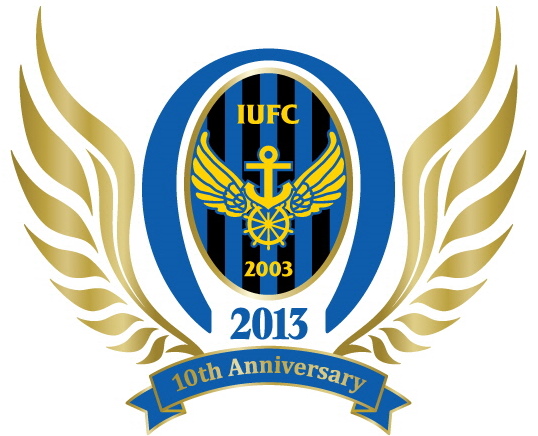 This is the first in a small series of articles which give a bit of an overview of some K League Classic Football (soccer) teams for the 2013 season, fixtures, squads, stadiums, links and ticket prices. In the past we’ve posted about the a few stadiums as well as other K League Classic related themes and we hope to expand on those this coming 2013 season.

In this first part we’ll look at Incheon United; we know a little more about this side as we support them and would consider them our team. Incheon United may not have a massive fan base however they are fun team to follow.

Who – The Team and Key Players for the 2013 Season

Incheon United where formed in 2003 following the 2002 world cup which South Korea jointly hosted. Many new teams came into existence around that time in order for local governments to provide a use of the newly built world cup stadiums. As well as trying to develop the existing K League. Over the past 10 years Incheon United have always been competitive however have been really shone.

During the 2012 season after an awful start improved massively under coach turned manager Kim Bong-Gil. They finished the season 9th top of the relegation section. Sadly during the winter break they’ve lost a few key players as well as 3 of the 4 foreigner players. However they have signed some interesting replacements and still have a number of influential names. Here are our 3 key players to watch out for this 2013 season: 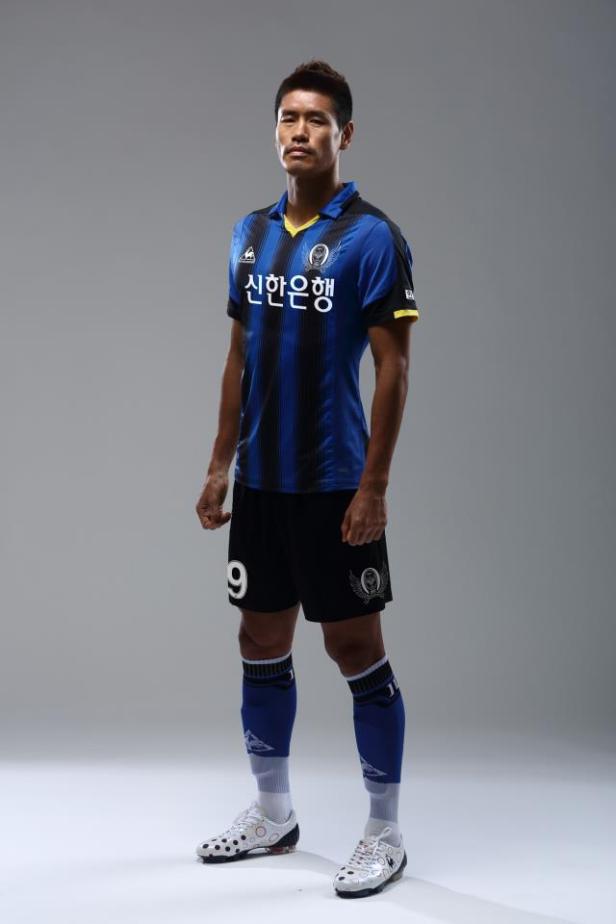 Seol Ki-Hyeon –  The former South Korean International (over 80 caps), played for 6 years in England with 4 of those in the premier league. He maybe getting on a little bit these days at 34 however he can still show a touch of skill. This will be his second season at his hometown club. 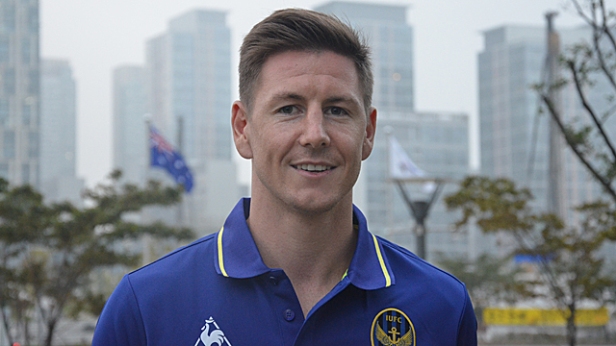 Nathan Burns – The Australian International who in his first season in Korea was limited to just 3 appearances due to a bad knee injury. According to his Twitter page (@nathanburns10) he is fit again and is the type of player that could really dominate in the K League Classic. 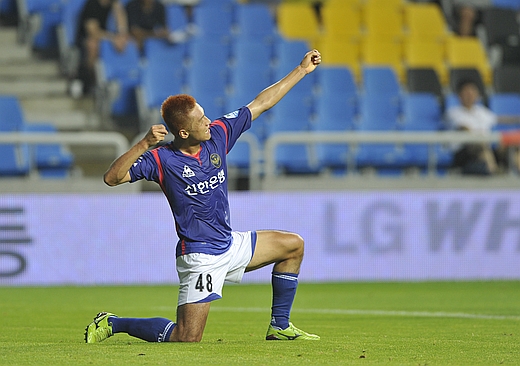 Nam Joon-Jae – A 2012 mid-season transfer from Jeju United Nam Joon-Jae returned to Incheon after 2 years away. He was purchased more as a squad player and was given the number 48, however he ended the season with 8 goals from 22 games. For the 2013 season he’s been given the number 7 and could be a major asset. He is also famous because of his touchline marriage proposal last season.

Where – The Incheon Football Stadium or Seungui Arena Park 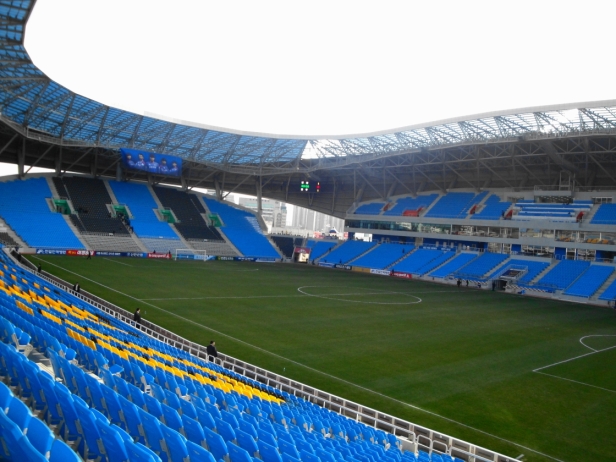 Previously we wrote an article detailing the different parts of the Incheon Football Stadium as well as directions – INFORMATION HERE. A few things have changed regarding ticketing (details below) however the directions and general information is still current. 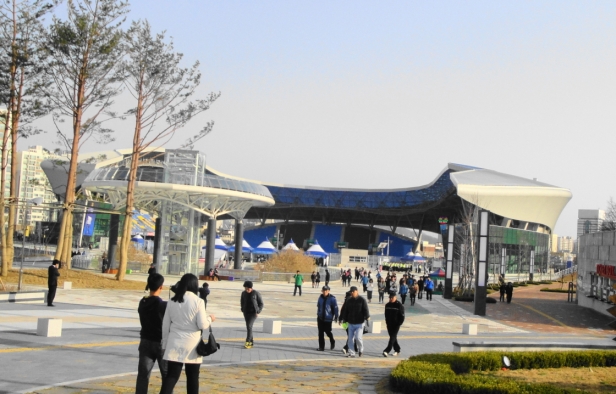 The 2013 K League Classic Season for Incheon United starts on Sunday March 3rd and the regular season finishes on Sunday September 9th after that depending on there league position they will play a further 12 games either in the championship or relegation section, this will conclude at the end of November. This will also play in the Korean FA Cup (fixtures not yet drawn).

Here are the Championship Round Fixtures for Incheon United. These are the only reminding games this year. 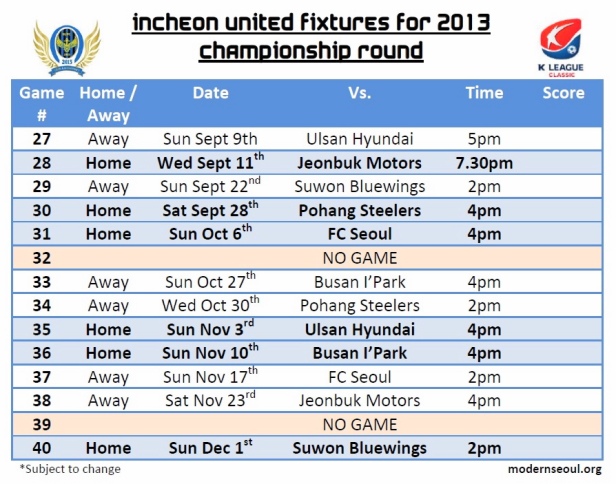 Results from each of the games played so far (July 8th) have been added. 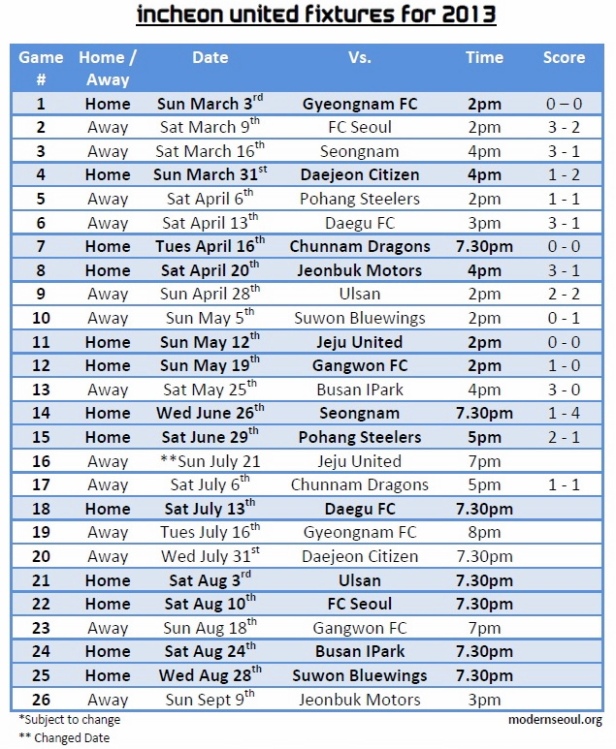 Here is the previous version of the Incheon United 2013 fixtures, they are subject to change: 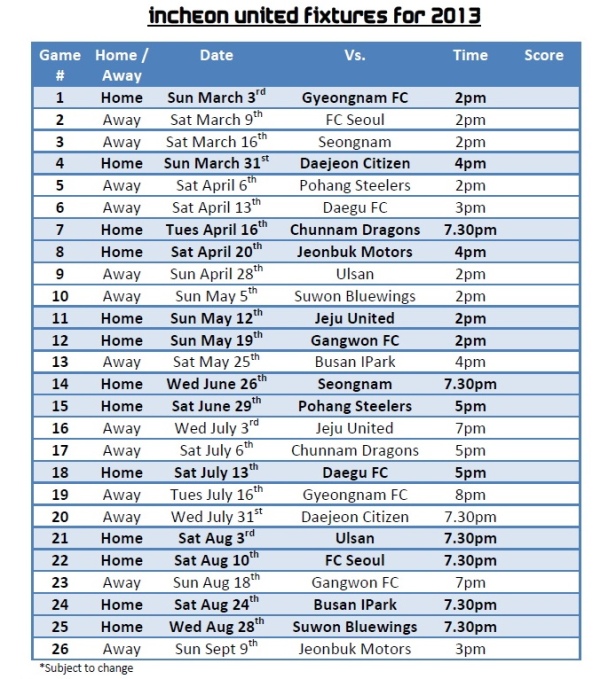 How – Ticket Prices and Supporter Details

Tickets are available on Match Days or can be purchased in advance *please note* they didn’t sell out during the whole of the 2012 season, most games have an attendance of around 4,000 which is 20% of the capacity. However for the game vs. Suwon Bluewings there were 17,000 in attendance and other big games had around 10,000 fans.

The ticket pricing system for the 2013 season has been simplified so that there are 2 main options. Either a North,East,South Ticket costing ₩10,000 for an adult or a West stand ticket which costs ₩15,000. If you buy your ticket in advance you’ll save around ₩2,000 also children and seniors pay less. *Please note* In our opinion a ₩5,000 or 50% difference in price between the tickets is quite strange and surprising as the difference in view and benefits are basically zero. Tickets are more expensive than in 2012 going up on average by ₩2,000. = Full Ticket Details Here (in Korean) 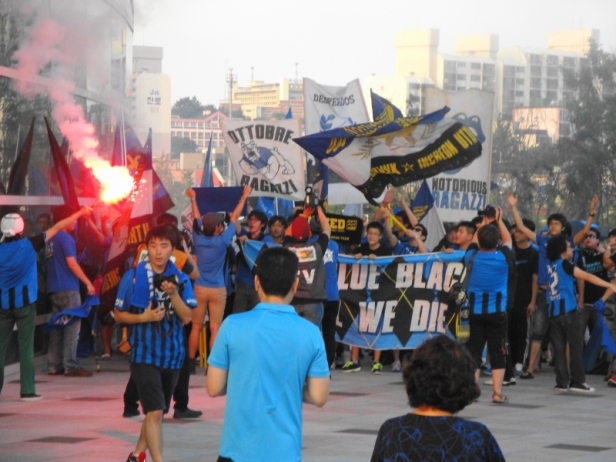 Most of the hardcore fans stand (a special standing area was built) behind the goal in the South Stand with other regular fans sitting in the same stand. This was the case last season mainly because ticket prices for the South Stand were lower, although prices have increased it seems unlikely people will move to other areas. 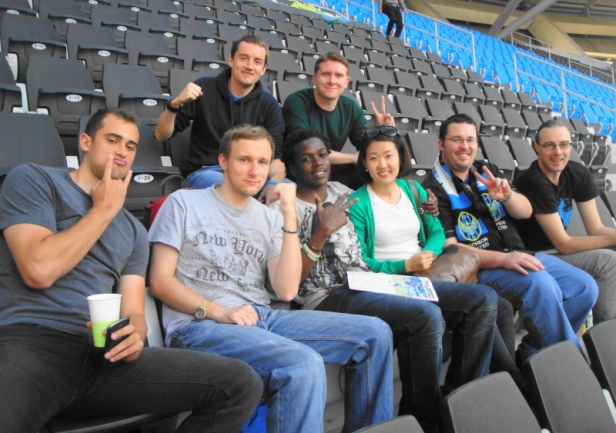 There is a small number of regular expat Incheon United fans, currently there is no formal group however many are members of a Facebook group – 미추홀보이즈 There are also occasional Facebook Events and meetups to go to games, we will link them if and when they are created. Fresh Korean have run events going to watch games before in the past – Fresh Korean Events.

Incheon United on Soccerway – This link provides the latest results and fixtures for Incheon United, as well as the rest of the K-League. 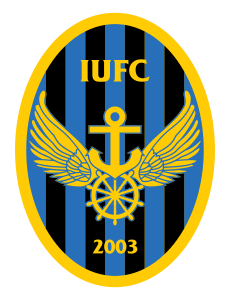 For Parts 2 and 3 of this series will look at both FC Seoul and Suwon Bluewings.

If you have any questions and comments relating to Incheon United or even the K League Classic in general please ask below.