This is the second in a small series of articles which give a bit of an overview of some K League Classic Football (soccer) teams for the 2013 season, fixtures, squads, stadiums, links and ticket prices. In the past we’ve posted about the a few stadiums as well as other K League Classic related themes and we hope to expand on those this coming 2013 season.

In this second part we’ll look at FC Seoul; if you’re interested in starting from the beginning here is a link to Part 1 – Incheon United.

Who – The Team and Key Players for the 2013 Season

FC Seoul have a short yet successful history, originally founded 29 years ago as Lucky Goldstar FC they moved to Anyang in 1990 before returning to Seoul in 2004 and moved into the Seoul World Cup Stadium. In total FC Seoul have won 5 League titles, 2 League Cups and 1 FA Cup. FC Seoul are owned partly by the GS Group.

FC Seoul basically went from strength to strength during the 2012 season and were battling for the title from the very start of the season. They had a few minor blips but ended up winning the K League championship with a couple of games to spare. During the off season not much has changed within the FC Seoul squad apart from strengthening in a few areas. Here are our 3 key players to watch out for this 2013 season: 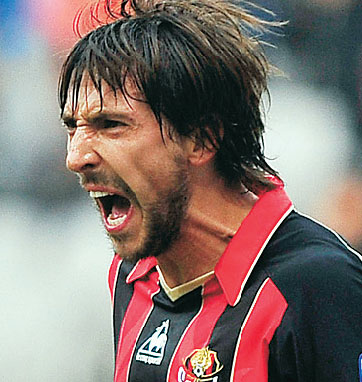 Dejan Damjanovic –  A current Montenegrin international with 16 caps to his name. He has previously played 5 seasons for FC Seoul since his move from rivals Incheon United, and he has always been a consistent member of the squad. Last season he past 100 K League goals and is now only 3 away from 100 in the K League just for FC Seoul. He is always a player to watch out for.  His Twitter account is: @Boske9

Ha Dae Sung – The current captain of FC Seoul. Dae Sung had his breakthrough season in 2012 which also included his breaking in the national team and gaining 5 caps. If he continues what he started last season he really could be a key player for FC Seoul this season. 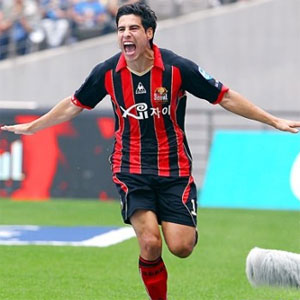 Mauricio Molina – A former Colombian international with 13 caps to his name. He was a little bit of a journeyman winger who has played in all over South America as well as Eastern Europe, the middle east and finally South Korea. In his previous 2 seasons at FC Seoul he as reached 78 appearances scoring 28 goals.  Rumors earlier in the year were that he was going to return to Colombia however he seems settled again and it one to watch this 2013 season. His Twitter account is: @Maomolina11

Where – The Seoul World Cup Stadium

Previously we wrote an article detailing the different parts of the Seoul World Cup Stadium as well as directions – INFORMATION HERE. A few tiny things have changed regarding ticketing (details below) however the directions and general information is still current. 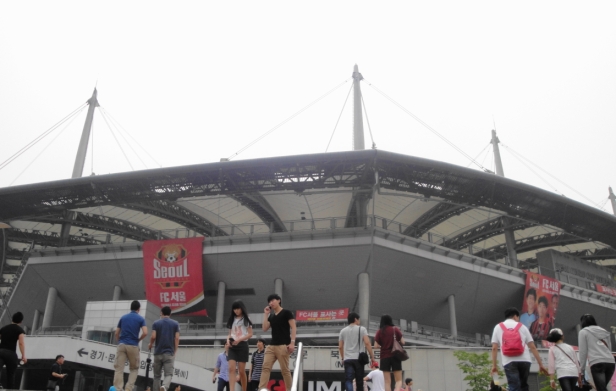 The 2013 K League Classic Season for FC Seoul starts on Sunday March 3rd and the regular season finishes on Sunday September 1st after that depending on their league position they will play a further 12 games either in the championship or relegation section (unlikely but it may happen), this will conclude at the end of November. This will also play in the Korean FA Cup (fixtures not yet drawn). Also because they won the K League last season they will compete in the 2013 AFC Champions League (games mainly on Tuesday evenings)

Here are the 2013 fixtures, they are subject to change: 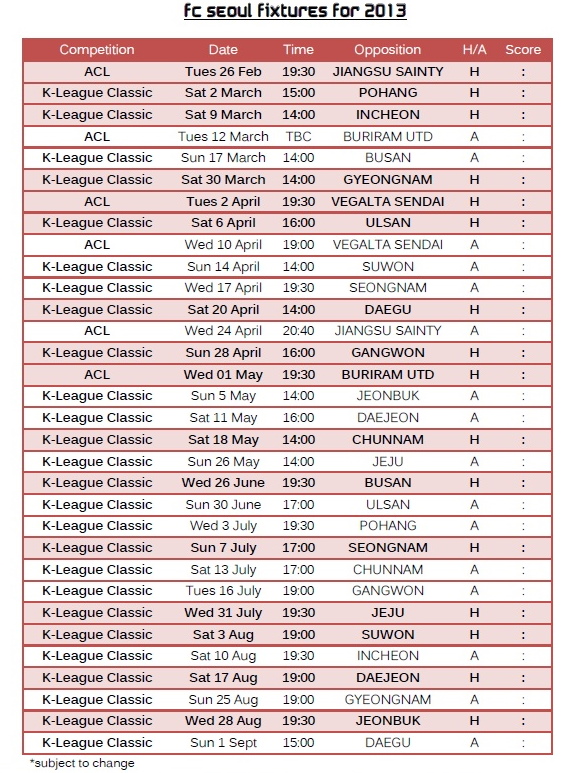 PDF Version of the FC Seoul Fixtures for 2013 in English

How – Ticket Prices and Supporter Details

Tickets are available on Match Days or can be purchased in advance (₩2,000 discount). *please note* like most K League teams FC Seoul rarely (maybe never) sell out of tickets, the main game of the season is the derby against Suwon Bluewings, which saw an attendance of 50,707 (still not a sell out). On average last season FC Seoul had attendances of just over 20,000 which is less than a third of the possible 68,000 capacity.

The ticket pricing system for the 2013 season has 4 options. Either a North,East,South or West Ticket, the cheapest costing ₩10,000 for an adult is the North Stand (behind the goal). The middle priced tickets are the East Stand which costs ₩14,000, and the South Stand (away fans) which also costs ₩14,000. Finally you have the reserved seating area in the West Stand which costs ₩20,000. If you buy your ticket in advance you’ll save around ₩2,000 also children and seniors pay less. Best advice, if you want a good view sit in the East Stand in the 2nd tier, for some reason Korean like to sit right next to the pitch. For good atmosphere sit in the North Stand bottom tier. Ticket prices were frozen from the 2012 but for Full Ticket Details Click Here (maybe out of date) 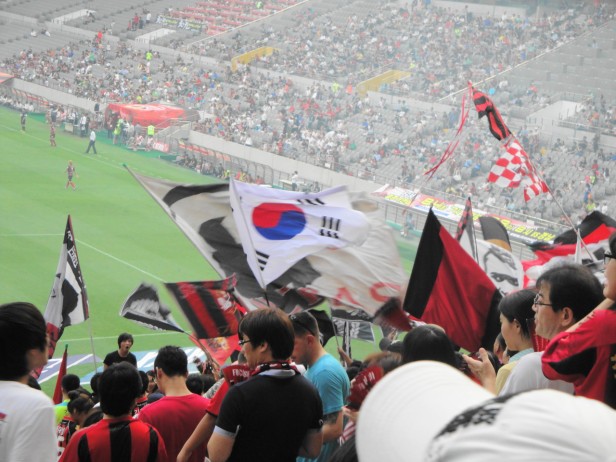 Most of the hardcore fans sit (but most stand) behind the goal in the North Stand with other regular fans sitting in the same stand. This area is also the cheapest and maybe why the fans choose to sit (stand) there.

There are a good number of regular foreign FC Seoul fans, currently there are 2 small supporter Facebook groups LET’S GO! FC SEOUL~ & FC Seoul Foreigners Fan Club. If you’re looking for people to go to a game with these groups are a good start. Also there are occasional Facebook Events and meetups to go to games, we will link them if and when they are created. Fresh Korean have run events going to watch FC Seoul games in the past – Fresh Korean Events, last season it was a 6-0 win over Busan I Park (it was good game to choose).

FC Seoul Homepage – In English and provides information about everything FC Seoul. It can be a little out of date sometimes.

FC Seoul Facebook Page – This one is more in Korean but it still useful.

FC Seoul on Soccerway – This link provides the latest results and fixtures for FC Seoul, as well as the rest of the K-League.

Parts 3 of this series will look at Suwon Bluewings – CLICK HERE.

If you have any questions and comments relating to FC Seoul or just the K League Classic in general please do so below.