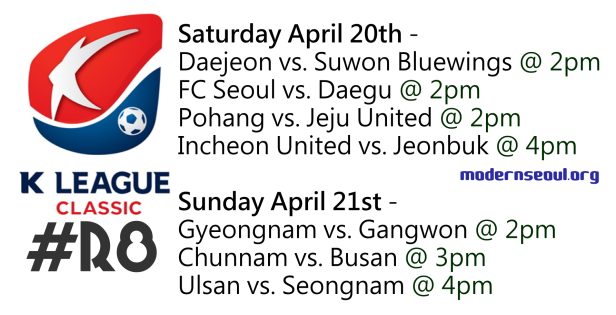 This weekend is round 8 of the Korean K League Classic 2013 and after a busy set of midweek tie many teams are either looking to improve or extend their fortunes. This weekend features 7 games 4 on Saturday and 3 on Sunday (fixtures listed above). Here is a brief preview of each plus our prediction:

Both teams come into this game on the back of midweek defeats. Daejeon have only won once this season and their home record hasn’t been good (2 draws 2 defeats). Suwon on the other hand lost for the first time away from home on Wednesday vs. Busan, but previous where unbeaten. We feel that Suwon will edge this one.

Maybe a little surprisingly to some this game between 2 of the bottom three. Neither team has won so far this season and Daegu have lost their last 3 in a row. FC Seoul cannot afford to loss many more points even at this stage of the season so maybe feeling a little extra pressure. However we honestly think they’ll get their first win of the season.

League leaders Pohang host 6th placed Jeju United in an interesting game being played down in Korea’s South East. Jeju may benefit from not playing during the week however Pohang will prove stronger opposition than in their last game (they won 4-0 vs. Gangwon). Overall we think it will be a draw.

Saturdays late game sees 5th placed Incheon host 3rd placed Jeonbuk. Strangely Incheon have a much better away record and a bad home record (2 draws and 1 loss) whilst Jeonbuk have been poor away from home (1 win, 1 draw and 1 loss). We honestly think this will be a close game and if it’s anything like last seasons 3-3 draw it should be a good game but a draw.

Bottom of the league Gangwon travel to undefeated Gyeongnam in Sundays early game. Gyeongnam have however drawn 5 of their 6 games so far this season with their only win comes over a month ago. However Gangwon have lost their last 3 of their last 4 games heavily and sadly we feel that form may continue.

Chunnam have seen their form improve nicely over the past couple of weeks gaining 5 points from 3 games. They also have one of the better defensive records in the K League Classic so far this season, partly thanks to their 43 year old goalkeeper Kim Byung-Ji. Busan however have also been on great form so far this season beating both FC Seoul and Suwon Bluewings. We think this will be a very close and scoreless game.

Seongnam continued their improved form winning their last 2 games both against strong opposition in the forms of Jeonbuk and FC Seoul. Ulsan have also have a good start to the season and are currently in 2nd place 1 point behind the leaders Pohang. We honestly think that Seongnam on the road will not be able to match their home form and Ulsan should win.

Taking into account all 7 results their where a few key movers. At the top Incheon’s win coupled with Ulsan’s loss moves Incheon upto 3rd, whilst Pohang stay 1st and Suwon 2nd. Daegu sit at the bottom at the end of round 8 with Gangwon moving up to 13th. Daejeon and Chunnam are just ahead of them, with FC Seoul moving upto a more respectable 10th.

Our Round 8 Predictions Round Up

This week we got just 3 correct results and no perfect scores. The phrase “Don’t quit your day job” comes to mind, but we feel that very few people would have predicted the results at Incheon and Ulsan this weekend.

This weekend also features 4 K League Challenge (K League 2) games, 2 on Saturday and 2 on Sunday. The standout game is on Saturday between the Korean Army Team Sangju Sangmu who face league leaders Korean Police, both teams go into the game unbeaten in the league so far this season.

For all of the  information from K League Classic Round 7 please CLICK HERE.

If you have anything you’d like to add please let us know and have a nice weekend.