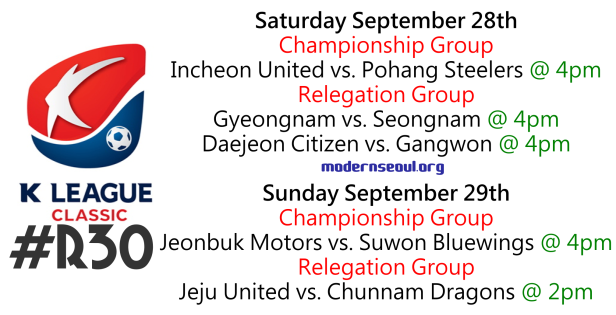 It’s the weekend again and that means some more exciting K League Classic Action. We’re round moving onto round 30 and both the championship and relegation battles are coming along nicely.

It should also be noted that the FC Seoul vs. Ulsan game has been moved from this weekend to the end of October because of FC Seoul’s trip to Iran for their Champions League game. Also Busan I’Park and Daegu have bye weeks.

Here are our brief previews of each game as well as predictions for this K League Classic Round 30:

6th placed Incheon United host current league leaders Pohang Steelers in Saturdays only championship group game. Both sides have struggled for form recently with Incheon winless since the split but have drawn twice. Pohang have picked up 4 points from their 3 games. Incheon need to win this one to keep their slim hopes of Champions League football alive but Pohang won’t come all the way to Incheon a just roll over. Therefore we feel a draw is the most lucky outcome.

11th (4th) placed Gyeongnam host 8th (1st) placed Seongnam this Saturday afternoon. With Seongnam moving to Ansan next season they only have a few more games and as they’re 30 points clear of the relegation zone only pride to play for. Gyeongnam on the other hand still face the risk of relegation and so a win would be a real boost. With Gyeongnams recent form we’re siding with them to take all 3 points.

This is maybe the most interesting game of the weekend and it’s a true relegation 6 pointer. Both sides have only won twice this season and sit in the bottom 2 spots in the league. With Daegu 2 wins clear neither side can afford to lose this one. This is really difficult to call but we feel Daejeon should have the edge at home and we’re siding with them to edge it.

3rd placed Jeonbuk host 5th placed Suwon in the 2nd of Sundays games. Jeonbuk are currently hanging onto the final champions league spot and a win over Suwon would help build a gap. Suwon have almost the same form as Jeonbuk however their away form this season has been weak so we feel that Jeonbuk will edge this one.
*Note* original kick off time moved from 4pm to 2pm.

In Sundays only Relegation group game already safe a 29 points clear of the relegation zone Jeju United host basically safe 18 points clear Chunnam Dragons in one of those playing for pride games. Although Jeju have the better overall record Chunnam are strong away from home so this should be close, however we feel Jeju will edge it.

Our Round 30 Predictions Round Up

Not a great for us with 2 correct results but no perfect scores.

The K League Challenge is now moving into Round 26 of it’s 35 round season. The Korean Police are running away with the league at the moment, so therefore Mondays game vs. Sangju Sangmu (Army) is very important.

For information on last weekends round, K League Classic Round 29 please CLICK HERE.