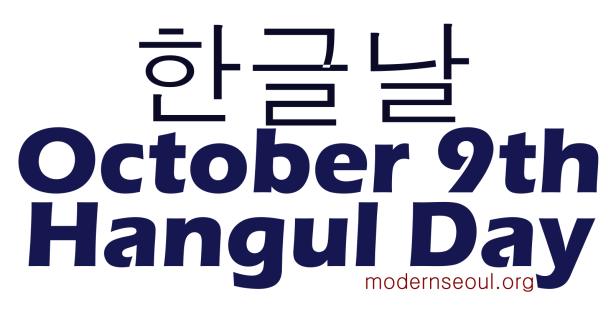 October 9th in South Korea is also known as Hangul Day or 한글날. Hangul means The Korean Language in Korean and Hangul Day celebrates the creation of Korean.

Hangul was the creation of King Sejong the Great, who you can see on the front of the 10,000 won banknote. He is maybe the most popular and famous historical Korean person. It is thought that he finished creating Hangul / the Korean Language in 1447 on around October 9th. Although Hangul has changed a little in the past 600 years it’s still pretty similar to what King Sejong the Great created.

Hangul day was official made a National / Public Holiday back in 1945. However 46 years later in 1991 it was removed as a national holiday due to pressure from business owners who didn’t like the number number of national / public holidays in September-October and in general throughout the year.

This decision was reversed last year (2012) and therefore making October 9th a public holiday again. *note* 2013 is the first year this is a public holiday and although Schools, Bank and other government buildings will be closed, some businesses may not close or take it as a holiday. Next year 2014 it will be a full holiday and nearly everyone will.

Hangul Day is also observed in North Korea but on January 15th.

Information on the different Korean banknotes: Who’s on the Korean Won?

As well as: King Sejong the Great Statue in Seoul

We hope you have a fun and enjoyable Hangul Day and if you have any questions feel free to let us know.