Round 36 of the K League Classic once again features a full schedule of games (2 on Saturday and 4 on Sunday), with some key clashes in both the championship and relegation groups. We also have the added treat of the 2nd leg of the AFC Champions League Final, which features FC Seoul.
As there are now only 5 rounds of games to go we’ve are once again including a league table for reference: 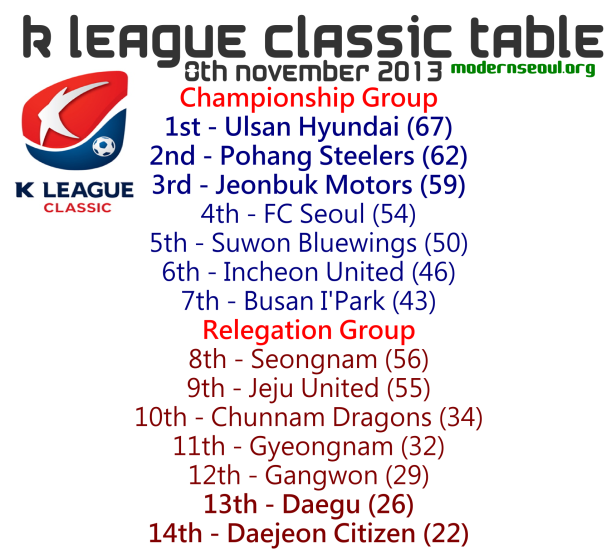 As you can see on the league table Ulsan Hyundai are currently leading the way and it looks like the championship is theirs to lose as they are currently 5 points clear. In the relegation group Daejeon are still hanging onto a weak K League lifeline however defeat this Saturday would all but seal their fate. It still looks like one of 4 teams could join them.
FC Seoul and Gyeongnam don’t have K League Classic games this week.

This is an interesting top of the table clash between the two Hyundai clubs as leaders Ulsan host 3rd placed Jeonbuk. Both sides are on strong form, however Ulsan have looked very strong and honestly we feel that their 4 game unbeaten run looks set to be extended.

Gangwon just like last season have found some great end of season form. Daejeon on the other hand still look doomed to playing in the K League Challenge next season. Daejeon need to win all 4 of their remaining games to gain 100% safety and even the playoff place looks a little far away. This will be a tight game as neither side can afford to lose and therefore we feel it will be a draw.

Suwon are still clinging into the faint hopes of taking the last champions league spot, whilst Pohang are still right in the title race. Suwon’s last 2 games have been disappointing but in front of their home fans you’d expect better. Pohang have looked pretty good recently however we feel that a draw is the most likely outcome.

The championship groups bottom two sides meet in the last of the weekends games. Both sides are on a pretty awful runs of form and a win for either side would give their fans something to smile about. We feel it will be a close game however Incheon should edge it.

Both of these sides are away and clear at the top of the relegation group and therefore just playing for fun. We feel that this late into the season and will little to play for that it will most likely end in a draw.

2 late goals help Ulsan extend their lead at the top of the table. Whilst at the bottom Daejeon survive another week with a vital win over Gangwon.

Pohang’s win this afternoon keeps them in the title race, although they are still 5 points behind Ulsan. The win was helped by some crazy goalkeeping by Suwon. Jeju are now top of the relegation group and Chunnam have edged a little closer to safety. Busan scored a 92nd minute winner in an even game in Incheon, both sides are now basically playing for pride.

No comment, it was a bad bad week for us.

After the 1st Leg in Seoul the tie currently stands level at 2 – 2. Which therefore gives the advantage to Guangzhou on Away Goals. Therefore we expect them to be pretty defensive at least to start with. FC Seoul therefore cannot afford to draw this game (unless it’s 2-2 or higher) and so we’d expect a slightly more attacked approach. As the two sides showed in the first leg they’re pretty evenly matched so choosing a winner is not easy. However Guangzhou with the 2 away goals and home field advantage we feel will win overall.

Guangzhou Evergrande 1 – 1 FC Seoul (3 – 3 on Agg) Guangzhou are winners on Away Goals.

Here are the highlights of the final;

The K League Challenge is now into round 32 of it’s 35 round season. Sangju Sangmu (the Korean Army Team) could win the league this weekend if they can beat Goyang Hi. They could also claim the championship if Korean Police fail to win vs. Bucheon 1995.

As there are only 4 games left to play, because of this and similar to the K League classic we’ve made a K League Table for reference:

Sangju Sangmu are currently 10 points clear at the top of the table and so as already mentioned they could seal the title and a place in the promotion/relegation playoffs this weekend.

Sangju Sangmu came from behind to win on Sunday afternoon vs. Goyang Hi and secure the 2013 K League Challenge Title and a place in the promotion/relegation playoffs. The final 3 games of the season will be for pride and minor places.

For information on the previous round a little over a week ago, K League Classic Round 35 please CLICK HERE.