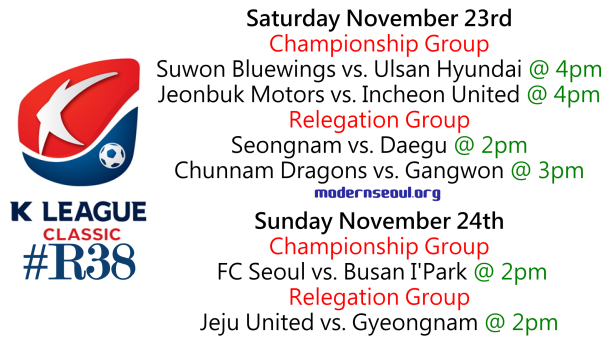 Round 38 of the K League Classic once again features a full schedule of games (4 on Saturday and 2 on Sunday), with some key clashes in both the championship and relegation groups. Everything is still to up for grabs so there are plenty of 6 points.
As there are now only 3 rounds of games to go we’ve are once again including a league table for reference: 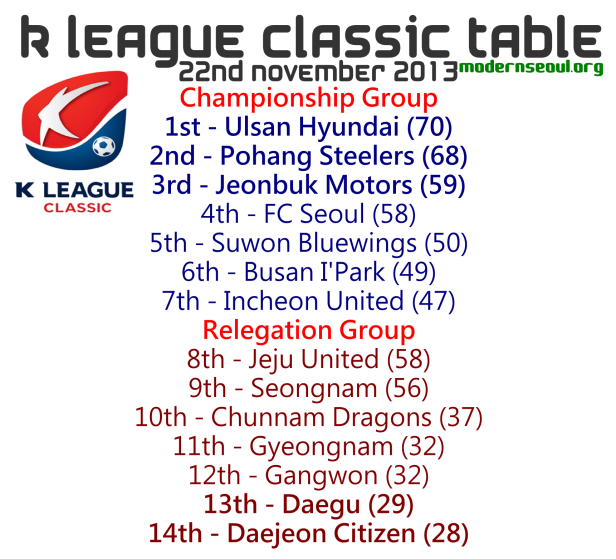 As you can see on the league table Ulsan Hyundai are still currently leading the way and are currently 2 points clear, but with a game in hand. Also as Pohang don’t play this weekend they can put one hand on the title with a win this weekend. In the relegation group Daejeon are still shocking everyone and could still escape after winning their last 4 games, however if Gyeongnam and Gangwon win this weekend then Daejeon will be relegated.. With only 2 or 3 games to play it’s between the bottom 4 to see who goes down to the K League Challenge next season.
Pohang Steelers and Daejeon Citizen don’t have K League Classic games this week.

Suwon Bluewings come into this game on pretty awful form losing their last 4 games. On the other hand Ulsan Hyundai are on great form winning their last 5 games and only conceding 1 goal. Ulsan should win this one in our option.

Both Jeonbuk and Incheon come into this game on bad runs of form. Jeonbuk have lost their last 3 games, whilst Incheon haven’t won since the leagues split. This game has a draw written all over it.

Seongnam have been playing for fun for the past month or so and recently have been on a bad run of form only winning 1 of their last 5 games. Daegu improved in their last game beating Jeju and keeping within 3 points of safety. This is a difficult game to predict but we feel that Daegu might edge it.

Chunnam Dragons are almost safe from relegation whilst Gangwon are still in real danger despite winning 3 of their last 4 games. This game will be close and we feel an entertaining draw is the most likely outcome.

After winning easily during the week vs. Jeonbuk FC Seoul seem to have secured the 4th and final champions league spot. Whilst Busan have won their last 2 games and have moved up to 6th. This game will be close however FC Seoul should edge it on the day.

Jeju United are away and safe currently 29 points clear of the relegation zone. Gyeongnam on the other hand are still in real danger and are only 3 points clear. Even though last lost their last game vs. Daegu we feel that Jeju should edge this one.

Starting in the relegation group both games were pretty disappointing however they do impact the table. Chunnam Dragons are now safe, whilst both Daegu and Gangwon are still in trouble. The game between the two sides on Wednesday evening may prove crucial.
In the championship group there weren’t any shocks as both Ulsan and Jeonbuk won. Ulsan are now 5 points clear at the top with just 2 games to play.

Gyeongnam’s 3 points have all but secured their K League Classic survival, a point from their final two games will make it 100%. FC Seoul’s continued improved form held strong as they beat Busan I’Park. The match started on a sour note when midfielder Molina went down for over 5 minutes with a bad head injury, he seems ok now though.

Lee Young Pyo with given FC Seoul hero status and given the retired number 12 shirt. It’s seen as slightly strange as he never played for FC Seoul, but LG Cheetahs based in Anyang which moved to Seoul after he had left to play in Holland.

2 correct results but no perfect scores this week.

The K League Challenge is now into round 34 of it’s 35 round season. Sangju Sangmu (the Korean Army Team) secured the 2013 K League Challenge title a few weeks ago and therefore will play in the promotion/relegation playoff at the beginning of December.

As there are only 2 games left to play we’ve made a K League Table for reference. The title race maybe over but the rest of the table is still pretty close:

Sangju Sangmu are currently 10 points clear at the top of the table and can’t be caught, Chungju still look safe bets to finish bottom with Bucheon 1995 7th, Gwangju 3rd and Korean Police runners up. The rest of the table is still pretty wide open with only a couple of games to play.

For information on the previous round, K League Classic Round 37 please CLICK HERE.

One thought on “K League Classic 2013 Round 38 – Previews, Tables, Predictions and Results”