As there has now been 15 points up for grabs the League Table is starting to form and therefore for reference here is the latest K League Classic 2014 League Table, including Points and Goal Difference: 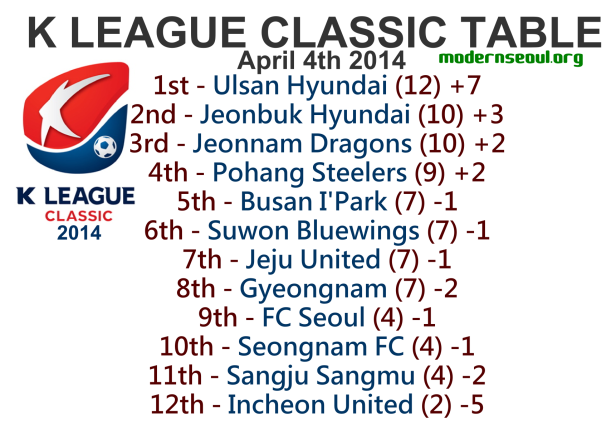 The league table hasn’t changed a great deal from last weekend as most of the top teams won and lower teams lost. Ulsan Hyundai still lead the way on 12 points with Jeonbuk Hyundai, Jeonnam Dragons and Pohang Steelers all close behind. Busan, Suwon, Jeju and Gyeongnam all sit mid-table on 7 points each. Whilst FC Seoul, Seongnam and Sangju are towards the bottom on 4 points. Finally Incheon United sit at the foot of the table on just 2 points from 5 games.

This weekend there are once again 6 games, 3 on Saturday and 3 on Sunday. Also all of the games are still being played in the afternoon and will be until May. Here are brief previews of this weeks K League Classic Round 6 Games;

Saturdays first game features two sides with basically the same record, both on 7 points but Gyeongnam has conceded 1 extra goal. Both played out close game last weekend and this one maybe the some. This one will be close and a late goal might settle it, however we’re going with a draw.

Home side Sangju Sangmu (army) lost their unbeaten record last weekend falling away from home vs. Pohang Steelers. Jeju United on the other hand claimed a point vs. Gyeongnam. Once again this should be a close game, but if Sangju can improve defensively they should win.

In Saturdays two of the bottom clubs face each other. Seongnam FC lost 1-0 last weekend (their 3rd 1-0 defeat of the season) away to 2nd placed Jeonbuk. Bottom Incheon on the other hand played out a dull 0-0 vs. 3rd placed Jeonnam. Both sides have looked weak attacking this season and so a single goal should win this one and we’re siding with the away side Incheon.

In Sundays second game 3rd placed Jeonnam Dragons take on reigning champions and currently 4th placed Pohang Steelers. Jeonnam Dragons could only take a point on the road last weekend vs. bottom side Incheon (0-0). Whilst Pohang won an entertaining game vs. Sangju Sangmu 4-2. Pohang also won in the Champions League 4 – 2 in China vs. Shandong Luneng. This game should be interesting but we feel a draw is the most likely outcome.

In the final game of the weekend Busan I’Park host league leaders Ulsan Hyundai in a South East Derby of sorts. Busan lost away to Suwon Bluewings by a single goal in their last game, whilst Ulsan won by a single goal over FC Seoul (2-1). Ulsan however lost during the week in the Champions League vs. Chinese side Guizhou Renhe (3-1). There isn’t a clear winner here but we feel Ulsan have the league form to take home all 3 points.

Gyeongnam let a 2-0 slip away during the last 25mins and allowed Suwon to pick up a point.
Jeju won a tight game over Sangju, but neither side played well.
In the late game Seongnam and Incheon showed glimmers of quality but both lack any cutting edge.
*Fact* Incheon United have now failed to score in over 455mins of K League Classic action.

Seoul and Jeonbuk played out a close but entertaining game which either side could have won.
Both Jeonnam and Pohang held the lead and came back from behind during this back and forth game. 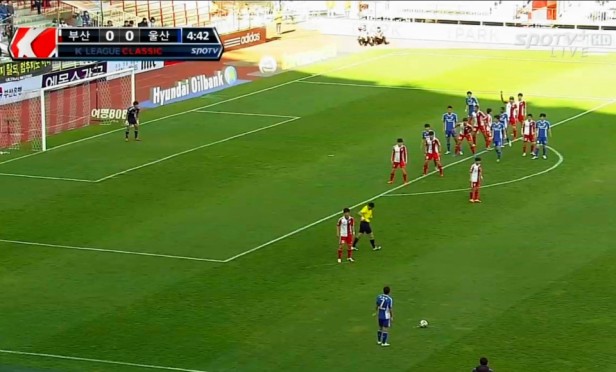 K League Classic 2014 Round 6 Predictions Round Up

2 Correct results from this weeks 6 games, with 1 perfect score. 5 draws this week was a bit of a surprise.

As already mentioned above starting from this week we’re separating the K League Classic and Challenge posts as together they were a little jumbled and long.

Click Here for all of the Details on Round 3

2 thoughts on “K League Classic 2014 Round 6 (Previews, Predictions and Results)”