The concept of Migration has been around since basically the beginning of time, however only in the modern age has Immigration been such a complicated but interesting aspect of life. For some the idea of looking at statistics is either pointless or boring, however they can help you learn more about many different things.

In this series we’re going to look at Immigration Statistics from here in South Korea. Often people make comments regarding the number of foreigners or the number of teachers but often without the stats and facts to back it up. Well known they (you) do. Every year the South Korean Government releases a 700+ page report (mostly in Korean) regarding Immigration and related numbers and statistics. Some (most) is bureaucratic filler but there is also some interesting information.

* Most of 130,000 Americans living in South Korea aren’t Teachers. In fact teachers account for less than 10%.

* The Male to Female ratio is pretty similar. In fact there are 1,000 more Male E2 visa holders than female.

Where do English Speaking E2 Teachers Come From? 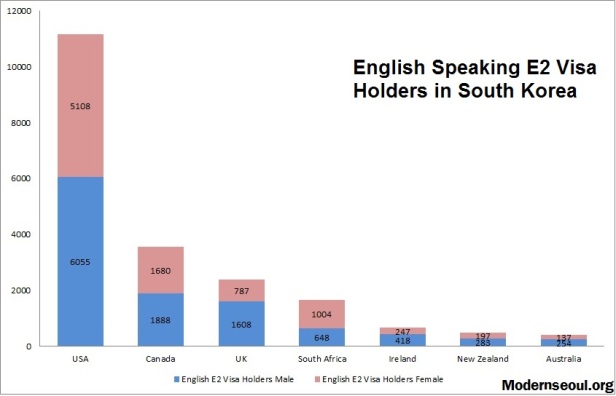 As you might expect there are more American E2 Visa holders than any other nation, they account for roughly half. Canada is second closely followed by the UK and maybe slightly surprisingly South Africa. In fact there are more female South African teachers than Male or British Female. Ireland, New Zealand and Australia account for the remaining few.

Of course there are just a handful of E2 visa holders from other nations. Most come from either China or Japan, there are the following:

Overall there are 1,289 Non-English Speaking E2 Visa Holders making up a little over 5%.

Also as this question is often asked, there are Zero E2 Holders from the following: Philippines, Thailand, Pakistan, India, Singapore, Malaysia or Hong Kong. Sorry if this comes as bad news.

The statistical information is available for free on the Korean Immigration Website (CLICK HERE). Also the statistics used in this article are from the 2012 report.

This topic maybe a little boring but it’s the type of thing so many people ask about or refer to we felt is was worth while taking a little long it.

As always if you have any questions related to E2 Visas, Korean Immigration or Teaching in Korea please feel free to let us know. Either below, by Email or via Twitter or Facebook.