As there has now been 24 points up for grabs the League Table is starting to form and therefore for reference here is the latest K League Classic 2014 League Table, including Points and Goal Difference: 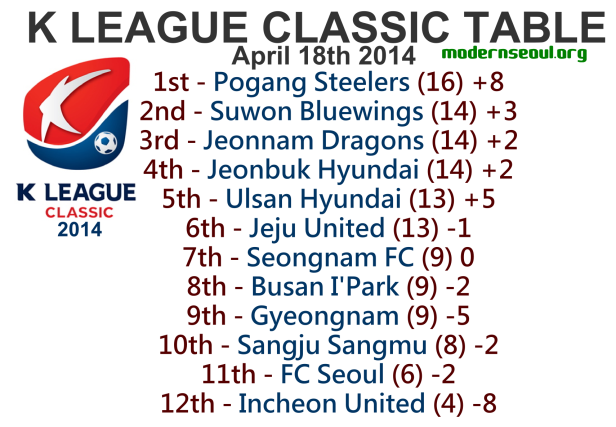 Last weekend there were a few important wins and the table changed quite a lot. It also helps that even after 8 games it’s still tight with just 1 point between 2nd and 6th and just 12 points from top to bottom. Pohang Steelers moved to the top of the league and Suwon jumped up to 2nd. Ulsan feel down to 5th after their 2nd defeat in a row. FC Seoul and Incheon United make up the bottom two.

This weekend there are once again 6 games, 3 on Saturday and 3 on Sunday. Also all of the games are still being played in the afternoon and will be until May. A lot of these games are between teams close to or even next to each other in the league table. Here are brief previews of this weekends K League Classic Round 9 Games;

Saturdays first game is an interesting clash between 2 big sides. 5th placed Ulsan are on a poor run of the form losing their last 3 games in all competitions. 2nd placed Suwon on the other hand beat Incheon easily last weekend to extend their strong run to 3 wins from their last 4 games. This game could be a classic or a dud, but we’re siding with a classic and a win for Suwon.

Saturdays 2nd game doesn’t really jump off the page as 8th placed Busan host 7th placed Seongnam in a middle table clash. The two sides are equal on points and also goal difference separates them. However Busan are on a poor run of form with no wins from their last 5 games. Seongnam have the best defense in the league but sadly one of the weakest attacking lines. This game might be a diamond in the rough but we feel a scoreless draw maybe the final outcome.

Saturdays final game features two teams that currently are only goals scored apart on the league table. 3rd Placed Jeonnam have been this seasons surprise package and won last weekend in a tight games vs. Busan. Jeonbuk are currently one place below in 4th, and also won a tight game last weekend vs. Ulsan. However Jeonbuk also played and lost on Tuesday in the AFC Champions League. This game really could go either way and we feel that a draw is the most likely outcome.

Sundays first game features two of the league bigger sides, but slightly surprisingly it’s also a top vs. 2nd bottom clash. FC Seoul currently are struggling in the league (just like last season) however they were able to win down in Australia in the AFC Champions League on Wednesday. Pohang Steelers also won in the AFC Champions League on Wednesday but only had to travel to Japan. Pohang also have won 4 of their last 5 league games. This one could be a banana skin, but Pohang should be able to win based on recent form.

9th placed Gyeongnam host 10th placed Sangju Sangmu in an important game towards the bottom of the table. Both sides drew last weekend and as their league positions suggest they have very similar form. This one could be interesting but a draw is the most likely outcome.

Sadly both teams home cities (or area) have been on the news this week due to the Sewol Ferry Disaster, some Incheon United fans were planning on taking a ferry on Friday to watch the Jeju game but changed their plans. On the pitch both sides lost 3-0 last weekend, however prior to that Jeju had the better record and are currently 6th. Incheon on the other hand are bottom, winless and haven’t scored in 7 games (a K League Record). We hope that Incheon can at least score but we see Jeju winning this one.

Busan scored early and held on at home vs. Seongnam FC.
Ulsan came back in the final 5 minutes from 2 goals down to draw against Suwon Bluewings.
Jeonnam missed a number of good chances whilst Jeonbuk took theirs and the 3 points.

Despite going down to 10 men late on Pohang held on for the 3 points vs. Seoul.
Gyeongnam and Sangju played out a goalless draw with both sides lacking any cutting edge.
Incheon’s goalless run continues for an 8th game. A weak backpass allowed Jeju to score the only goal of the goal. 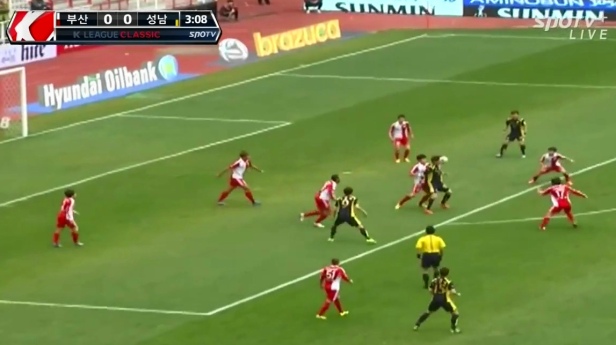 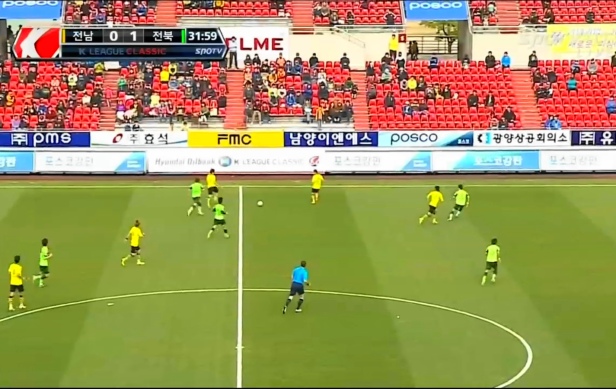 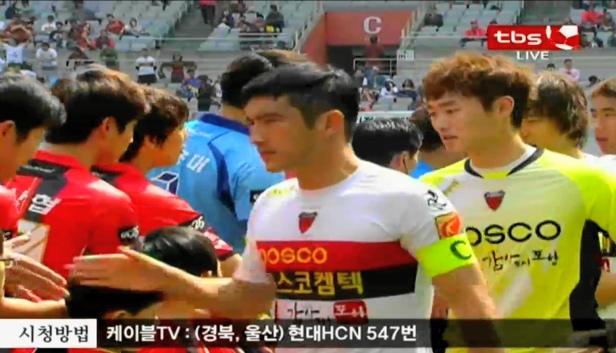 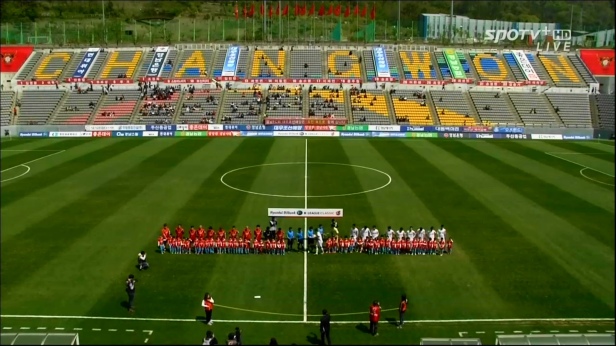 K League Classic 2014 Round 9 Predictions Round Up

50% record this week with 3 correct from 6 games. Sadly no correct results.

Round 3 just like in the English FA Cup is when the big boys from the top division join. This year is also a little different as they had a completely open draw with no seeding.

3rd Round Fixtures with all games to be played on April 30th unless stated otherwise, also K League Classic sides are in bold;

The 3 all K League Classic ties standout with FC Seoul vs. Incheon United maybe being the pick as the sides are rivals and will play each other again 4 days later.
Also K League Challenge & K League Classic table toppers Anyang and Pohang should prove interesting.
Whilst Busan and Gyeongnam face tricky trips to Amater sides Gangneung (Gangwon) and Jungnang (Seoul).

As already mentioned above these days we’re separating the K League Classic and Challenge posts as together they were a little jumbled and long.

Click Here for all of the Details on Round 5

2 thoughts on “K League Classic 2014 Round 9 (Previews, Predictions and Results)”