The K League Challenge moves into round 14 of the 2014 season, and with the K League Classic stopping for the summer / world cup the Challenge is now the top source of domestic football until the beginning of July. Of course due to the world cup having just started a few hours ago this preview will be brief.

Before looking at the previews and predictions for this weeks round 14, here is an updated K League Challenge 2014 league table: 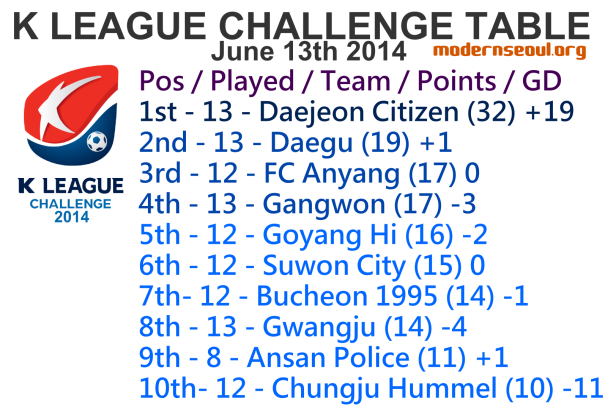 After last weekends round 13 games the table remains tight (7 points between 3rd and 10th) but a few teams have started to build on recent improvements in form. Daejeon are away and clear at the top of the table with a 13 point lead. Daegu lead the chase in 2nd and are closely followed by FC Anyang (who moved from 7th to 3rd thanks to their win last week) and Gangwon. Just outside the playoff places are Goyang (down 2), Suwon City (down 1) and Bucheon 1995 (down 1). Then we have Gwangju, Ansan Police (who have 4 or 5 games in hand over everyone) and finally Chungju Hummel.

Here are (extra) brief previews and predictions for this Weekends (including Monday) 5 games. It’s also worthwhile noting that all of the games are being played in the evening as the league has now entered summertime and it’s to hot during the day.

In Saturdays first game has improving FC Anyang hosting struggling Gwangju.
Gwangju haven’t won in 4 whilst Anyang have 6 points from their last 3 games.
It’s hard not to side with Anyang but it will be a close game.

Saturdays second game features 7th placed Bucheon 1995 hosting 6th placed Suwon City in this mid table clash.
As their league table positions suggest neither side has been on great form so far this season.
This will most likely end in a draw.

In Sundays first game 5th placed Goyang Hi host 2nd placed Daegu.
Both sides on paper have similar form with neither side showing much consistency.
Daegu might edge it but we’re not 100% sure and therefore we’re siding with a draw.

In the 2nd Sunday game (maybe different form some listings) Gangwon host Ansan Police.
Ansan have a large number of games in hand because they haven’t played at home for a while due to the sewol ferry disaster.
We’re siding with Gangwon as on paper they have both the form and match practice.

The final game of this round on Monday see’s the banana skin match of top vs. bottom or just Daejeon vs. Chungju.
Daejeon have a 13 point lead and their home record this season is almost perfect.
We can’t see Chungju pulling off a shock.

3 Correct Results with 1 perfect score from this weeks 5 games.