The K League Classic is Back! After almost 2 months of waiting due to the World Cup 2014 break (although it obviously didn’t help the national side), the league is entering into a busy period with 6 game each this month alone. Also due to the extended break a number of sides have spent that time changing up their squads.

As there has now been 12 games played and everybody has played each other at least once and the table to starting to take shape. So for reference here is the latest K League Classic 2014 League Table; including Games Played, Points and Goal Difference:

The league table shows an obvious split down the middle with a 6 point difference between 6th and 7th. Pohang Steelers lead the way with Jeonbuk, Jeju, Jeonnam, Ulsan and Suwon close behind. The next 5 sides are only separated by 2 points, and finally Incheon are at the bottom 3 points from 11th placed Sangju Sangmu.

This weekend there are 6 games, with 4 on Saturday and 2 on Sunday. Also all of the games are now being played in the evening as it’s too hot to play during the day, although it’s still pretty hot at night. Here are brief previews of the K League Classic Round 13 Games;

Saturdays first game of the returning K League Classic features 6th placed Suwon Bluewings hosting 10th placed Gyeongnam.
Suwon have been good at home this season, whilst away they’ve been pretty poor. Gyeongnam sadly haven’t had much luck away from home.
We feel Suwon will win this one and would be disappointed if they didn’t.

Saturdays 2nd game has 4th placed surprise package Jeonnam Dragons hosting 9th placed FC Seoul.
Most people would have expect these sides to be in opposite positions at this stage of the season.
Jeonnam have a good home record but do concede a little to easily, however Seoul aren’t great on the road.
We feel Jeonnam will edge this one but only just.

Saturdays 3rd 7pm kick off is a top of the table clash between 3rd placed Jeju United and current leaders Pohang Steelers.
Jeju as might expect have a strong home record, however league leaders Pohang do travel well.
We feel with the added benefit of 2 months rest that Pohang should be able to edge this one.

Saturdays sightly later kick off features 7th placed Busan I’Park hosting 2nd placed Jeonbuk Hyundai.
Busan have a very good home record and in fact are unbeaten at home this season. Jeonbuk on the other hand have a solid away record but nothing special.
This looks like it will be a close one, with a draw being the most likely outcome.

The first of Sundays games features 8th placed Seongnam FC and 5th placed Ulsan Hyundai.
During the first part of the season Seongnam FC were pretty strong at home, whilst Ulsan Hyundai were average at best on the road.
Therefore we see this being a close but entertaining draw.

The final game of the weekend is a relegation 6 pointer as 11th placed Sangju Sangmu travel to bottom side Incheon United.
Bottom side Incheon United will have a changed lineup including the resigned Brazilian forward Diogo.
Sangju Sangmu don’t have a strong away record however Incheon have only scored once at home this season.
On paper this is a close one and we see it being a draw.

Jeonbuk were Saturdays only winners and they are now just 3 points away from leaders Pohang Steelers.

This win for Sangju helps them jump up the table from 11th to 7th. 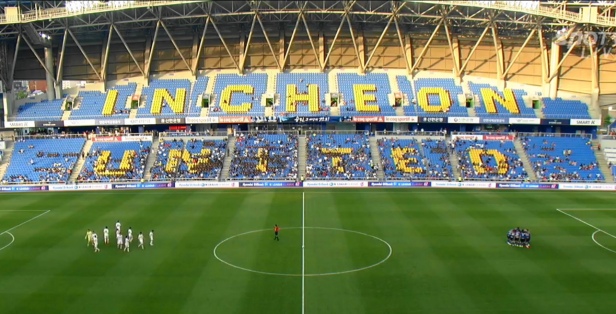 K League Classic 2014 Round 13 Predictions Round Up

Not a good start to the returning K League Classic with only 1 correct result and no perfect scores.
However 4 draws in 6 games was a pretty big shock.

Click Here for all of the Details on Round 17