The K League Challenge moves into round 20 of the 2014 season, and the league has proven to by very interesting so far this season. Plus now that the World Cup is over and the European league don’t start for another month, the K League is the best source of football action at the moment.

There are no K League Classic games this weekend due to the Park Ji Sung All Star Game. The game will be broadcast live on KBS.

Before looking at the previews and predictions for this weeks round 20, here is an updated K League Challenge 2014 league table: 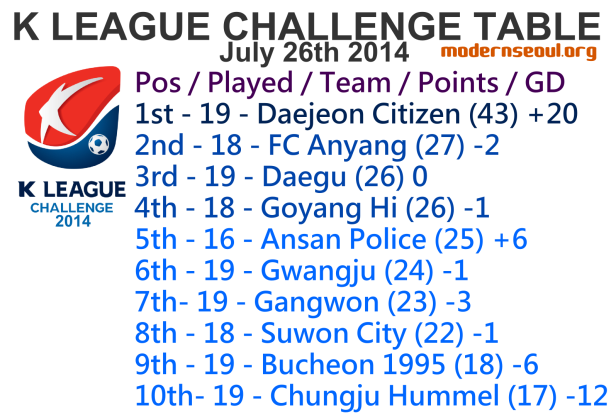 After last weeks round of games (plus 1 midweek game) the league has changed a little but is still very close, with only 10 points between 2nd and bottom. Daejeon are still top, with Anyang and Daegu just behind them in the playoff places. Goyang moved up and into the playoff places, with Ansan, Gwangju, Gangwon and Suwon making up the mid table. Bucheon moved off the bottom and have been replaced by Chungju.

Here are our brief previews and predictions for this Weekends (and Mondays) 5 games.

A little deja-vu here as for the second weekend running we have an interesting bottom vs. top clash.
Daejeon draw last weekend to previous bottom side Bucheon.
Bottom club Chungju Hummel lost weekend but for the first time in 6 games.
We still feel that Daejeon will win but it will be close.

Saturdays 2nd game features two playoff placed sides, Anyang (2nd) and Daegu (3rd).
3rd placed Daegu have only 1 win in their previous 5 games.
2nd placed FC Anyang have won 2 of their last 3 games.
This one will be tight and could be won by a single goal, so we’re siding with a draw.

Sundays first game features 6th placed Gwangju and 9th placed Bucheon
Gwangju have 3 wins in their last 4 games.
Bucheon won for the first time in 8 games during the week beating Ansan Police.
We feel Gwangju will edge this one at home but it will be pretty close.

Sundays second game features 4th placed Goyang Hi hosting 8th placed Suwon City.
The league positions are a little deceptive as they are only 4 points apart.
5th placed Goyang Hi have 3 wins from their last 4 games, whilst Suwon City have drawn 4 and lost 1 of their previous 5 games.
Goyang Hi will be slight favorites to win this one.

The Monday evening game features 7th placed Gangwon and 5th placed Ansan Police.
Despite a few interesting new signings Gangwon still look weak, whilst Ansan Police are a little inconsistent.
We feel Ansan should edge it but it may end in a draw.