The K League Classic once again returns for a midweek round of summer evening games. This is also the 19th round of 38 and therefore the midway point of the season. Some sides have surpassed expectations whilst others have had a poor seasons so far.

As there has now been 18 games played and everybody has played each other at least once and the table to starting to take shape. So for reference here is the latest K League Classic 2014 League Table; including Games Played, Points and Goal Difference: 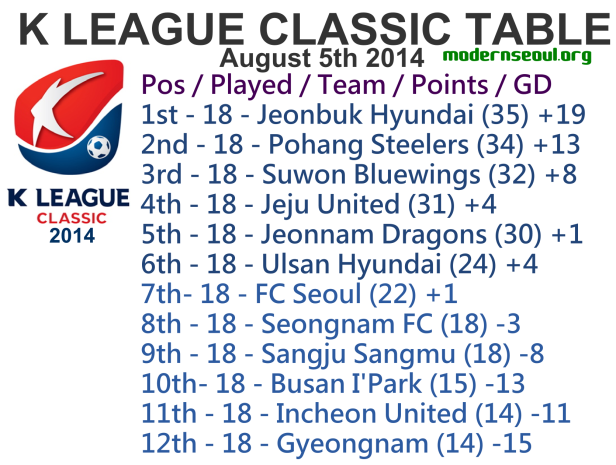 The league table saw a few changes have the weekend games had concluded. Jeonbuk Hyundai moved to the top of the table, whilst Suwon Bluewings jumped up 2 places to 3rd. Whilst at the bottom Incheon United finally moved off the bottom and were replaced by Gyeongnam.

This Wednesdays first game is a top of the table clash between Jeonbuk Hyundai (1st) and Suwon Bluewings (3rd).
Jeonbuk are unbeaten in 7 games, and easily beat Jeonnam at the weekend.
Suwon have won 4 of their last 5 games.
Both sides are on top form and this should be a great game, however a draw looks the likely outcome.

Wednesdays 2nd game in between 5th placed Jeonnam Dragons and 11th placed Incheon United.
Jeonnam have lost their last 2, but won the 3 games before those.
Incheon United won for only the second time this season at the weekend and have only lost 1 in 5.
This will be very close, but sadly once again it looks like a draw.

Wednesdays third game is between in form Jeju United (4th) and out of form Sangju Sangmu (9th).
Jeju United have maybe the best form in the K League, as they are unbeaten in 10 games.
Sangju Sangmu have lost 3 and drawn 1 of their last 4 games.
Jeju will go into this one favorites.

Wednesdays first 7.30 kick off is a relegation 6 pointer between 12th placed Gyeongnam and 10th placed Busan I’Park.
Gyeongnam have lost 4 and drawn 1 of their last 5 games, and haven’t won since the end of the March.
Busan I’Park haven’t won in 9 games and have lost 3 of their last 5 games.
Both sides need the win but neither has the form to do it, however we feel Gyeongnam might edge it.

The final game of this midweek round is between 7th placed FC Seoul and 6th placed Ulsan Hyundai. Sides who are only 2 points apart.
FC Seoul are unbeaten in their last 8 games (both league and cup) and still have a chance of making the top half.
Ulsan only have 1 win their last 5 games, and lost to lowly Incheon United at the weekend.
This one looks like it’s Seoul’s to lose.

Pictures and Instagram Posts from K League Classic Round 19

K League Classic 2014 Round 19 Predictions Round Up

There are no games in the K League Challenge this Wednesday. It will return on Saturday.

One thought on “K League Classic 2014 Round 19 (August 6th Previews, Predictions and Results)”