The K League Classic moves into the 20th round of the season this weekends and there are a number of interesting games. August is a busy month as all teams are playing at least 5 games each.

As there has now been 19 games played (around half) and everybody has played each other at least once and the table to starting to take shape. So for reference here is the latest K League Classic 2014 League Table; including Games Played, Points and Goal Difference: 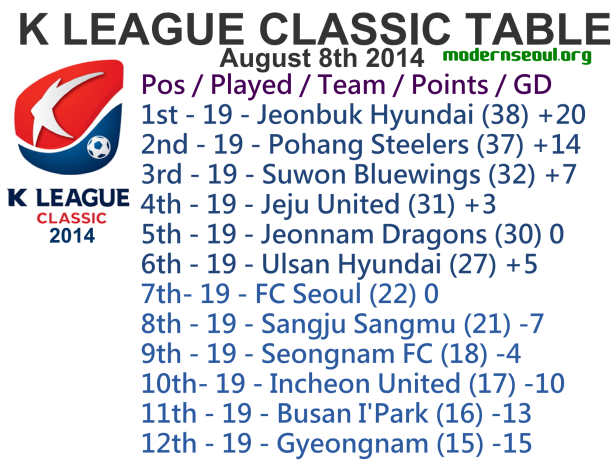 The league table saw a few changes after the midweek round of games, with 3 of the top 5 losing both Jeonbuk and Pohang extended their leads at the top. Ulsan also increased the difference between themselves in 6th and FC Seoul in 7th. At the bottom Incheon moved up to 10th after spending most of the season at the bottom.

This weekends round of games are equally split between Saturday and Sunday, and all games are in the evening (7pm or 7.30pm). Here are brief previews of the K League Classic Round 20 Games;

Saturdays 2nd game in between 9th placed Seongnam FC and current league leaders Jeonbuk Hyundai.
Seongnam lost for the 3rd time in 5 games during the week and are the leagues lowest goalscorers with only 11 goals.
Jeonbuk are unbeaten in 8 games, and beat Suwon during the week.
Jeonbuk will be favorites in this game.

Saturdays final game is between in 6th placed Ulsan Hyundai and 5th placed Jeonnam Dragons in an interesting mid table clash.
Ulsan have had mixed form recently with 2 wins, 1 draw and 2 defeats in their last 5 games.
Jeonnam have lost their last 3, but won the 3 games before those.
Ulsan will hope to close the 3 point gap between these sides.

Sundays first game is a relegation 6 pointer between 10th placed Incheon United and 12th placed Gyeongnam.
Incheon United have only lost 1 in 5 and have won their last 2 games.
Gyeongnam have lost 3 and drawn 2 of their last 5 games, and haven’t won since the end of the March.
This one will be close, but Incheon should have the edge.

Sundays second game is a top of the league clash between 3rd placed Suwon Bluewings and 4th placed Jeju United.
Suwon have won 3 of their last 4 games, but lost during the week.
Jeju United lost for the first time in 11 games during the week, but still are on strong form.
Both sides slipped up during the week and will be looking to bounce back, however a draw looks like a likely outcome.

The final game of this weekend is between lowly Busan I’Park (11th) and mid table FC Seoul (7th).
Busan I’Park haven’t won in 10 games, but have at least drawn their previous 2 games.
FC Seoul lost of the first time in 9 games during the week, but are still on good form.
This one looks like it’s Seoul’s to lose.

Pictures and Instagram Posts from K League Classic Round 20

K League Classic 2014 Round 20 Predictions Round Up

5 correct results from the 6 games, but no perfect scores.

The K League Challenge returns for the first time in two weeks.