The K League Classic moves into the 32nd round of the season, and with not much time left (2 games) in the main season (i.e. before the split) so every game is important. Also October is the final month of the main season.

As there has now been 31 games played (so only 2 games to go in the main season) and everybody has played each other at least twice and the table to starting to take shape. So for reference here is the latest K League Classic 2014 League Table; including Games Played, Points and Goal Difference: 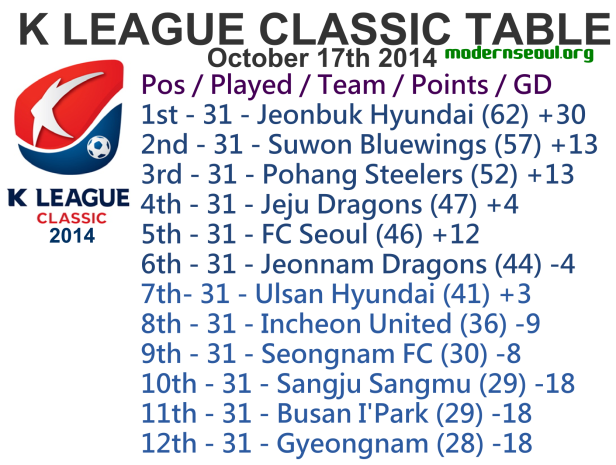 The league table does make for interesting reading and there are a number of tight areas. Jeonbuk Hyundai still have a 5 point lead at the top of the table with Suwon Bluewings close behind in second. Pohang are just behind them in 3rd with Jeju, Seoul and Jeonnam completing the top half. Ulsan have a slight chance of still making the top half, whilst the rest are in a relegation battle. Incheon have a little breathing room in 8th but the rest are only separated by 2 points. Gyeongnam are once again bottom.

This weekends round of games take place on Saturday and Sunday and are evenly split with 3 games on each day. Games take place in the now cooler afternoons. Here are brief previews of this weekends K League Classic Round 32 Games;

Saturdays first game is between 8th placed Incheon United and league leaders Jeonbuk Hyundai.
Incheon United have won 3 and drawn 1 of their previous 4 games.
Jeonbuk have won 3 in a row and are undefeated in 8.
Incheon have home advantage and are in form, but so are Jeonbuk. So we’re siding with a draw.

Saturdays 2nd game is a clash between 6th placed Jeonnam Dragons and 5th placed FC Seoul.
Jeonnam have only won 1 in 7, and lost last weekend.
FC Seoul are also struggling with only 1 win in 5.
Neither side is on good form and therefore we’re once again siding with a draw.

Saturdays last game is Champions League place battle between 4th placed Jeju United and 3rd placed Pohang Steelers.
Jeju United only have one win in 6 games.
Pohang Steelers haven’t won in 5 games now.
Once again two side meet both lacking form, have Jeju are generally good at home and so we’re giving them the edge.

Sundays opening game is between 2nd placed Suwon Bluewings and 9th placed Seongnam FC.
Suwon Bluewings are unbeaten in 10 with 6 wins and 4 draws.
Seongnam have 2 wins form their last 3 games.
Suwon will be favorites too take home all 3 points.

Sundays 2nd game is maybe the highlight of the weekend, a true relegation 6 pointer between 11th placed Busan I’Park and bottom side (12th) Gyeongnam.
Busan I’Park have 2 wins and 2 draws from their last 4 games.
Gyeongnam lost for the first time in 5 games last weekend, but that meant they replaced Busan at the bottom.
This should be an entertaining game which could go either way, so we’re predicting a draw.

Sundays final game is between 10th placed Sangju Sangmu and 8th placed Ulsan Hyundai.
Ulsan have lost their last 3 games and haven’t won in 5.
Sangju Sangmu won last weekend for the first time in about a month, but they are still in the relegation battle.
Ulsan have been pretty awful recently and so we’re siding with Sangju.

Pictures and Instagram Posts from K League Classic Round 32

K League Classic 2014 Round 32 Predictions Round Up

One correct result but no perfect scores.

Here are this weekends round 32 fixtures in the K League Challenge. There are a number of interesting clashes, however the top of the table clash between run away leaders Daejeon Citizen and 3rd placed FC Anyang will be the one to watch. As a draw will be enough to give Daejeon the title and promotion back to the K League Classic at the first time of asking.

Also for reference here is the current league league. As you can see it’s still very tight with so few games to go, basically everyone down to 8th placed Daegu still has a change of getting a place in the playoff finals and possibly winning promotion. 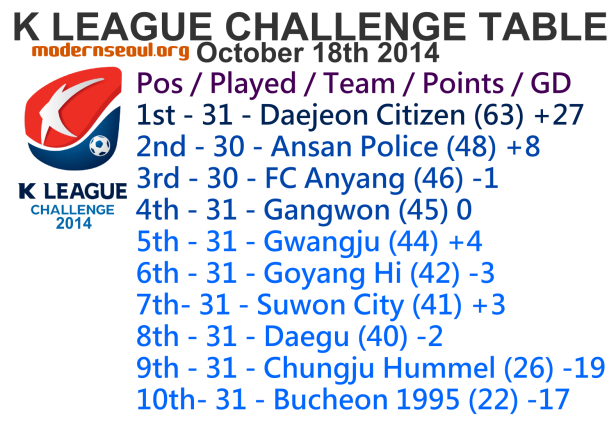 One thought on “K League Classic 2014 Round 32 (October 18th-19th Previews, Predictions and Results)”