Here is our Prediction, Previews and Thoughts for the upcoming 2015 K League Challenge. After an exciting and enjoyable 2nd K League Challenge in 2014 (maybe better than the top tier K League Classic) on the pitch we look towards the 2015 season. One of the issues during the 2014 season were attendances, as 9 of the 10 sides saw a drop and the league as a whole dropped 28% vs. 2013. However with 3 well supported sides entering the league figures should improve.

Also please note that these predictions and previews are based on our personal opinion as well as the performances of these sides over the past couple of years. Although the league is more stable now entering it’s 3rd year, there are still sides developing causing a degree of unpredictability.

Changes / New for 2015 in the K League Challenge

So those of you unfamiliar with the recent changes in the K League Challenge structure here in a basic recap:

Here is our prediction for the 2015 K League Challenge season; 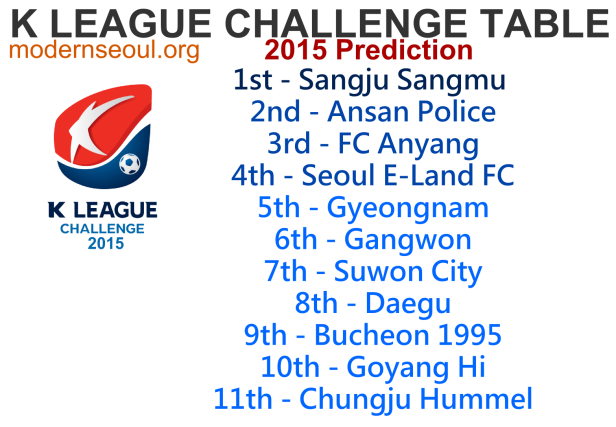 The sides in this years K League Challenge range in both size of support and budget. Although that doesn’t always equal success in a league of this size, it can be a factor when playing 40 games. The relegated teams from the K League Classic (Sangju Sangmu & Gyeongnam) are both quite changed for differing reasons but will be strong contenders. The existing K League Challenge sides had also improved their squads during this post and pre-season period. Here is a very brief insight into each of this seasons K League Challenge 2015 sides:

Sangju Sangmu – The champions from 2013 found life in back in the K League Classic last season tough work and were relegated finishing bottom of the league. However as the side is many up of Korean Military Service (Army in this case) Players from various K League sides they will be unweaken by their relegation. With a strong support base and solid squad they will favorites to claim their 2nd K League Challenge title in 3 years. (1st)

Ansan Police FC – Due to the tragic Sewol Ferry disaster local heartbreak certainly affected Ansan Police FC last season, and although they made the playoffs there was an air of understandable distraction. This season they once again come in with a strong squad and growing home support. A playoff place seems like a minimum expectation for them this season. (2nd)

FC Anyang – They finished last season just outside of the playoff places due to an awful run in, however prior to that they looked good and also had the 2nd highest average attendance (only behind champions Daejeon). They seem to have ditched their average Brazilian imported in favor of some loan players from K League Classic sides. Namely Lee Hyo-Kyun from Incheon United seems to be a strong signing for this upcoming season. We feel they should improve on last season and make the playoffs. (3rd)

Seoul E-Land FC – The newest K League side and the 2nd pro Seoul based side enter the 2015 season with a good amount of hype and a solid amount of funding. They’re lead by former MLS side Vancouver Whitecaps head coach Martin Rennie and have signed a number of promising young players as well as a handful of experienced foreign stars. They look like real title contenders however gelling together a completely new squad plus adapting to life at the Seoul Olympic Stadium and in the K League Challenge won’t happen over night and so a playoff place seems realist. (4th)

Gyeongnam – Slightly surprisingly relegated from the K League Classic via the playoffs last season. Gyeongnam have lost most of there stronger or higher paid players, but have at least kept hold of some of their talented younger squad members. With about a month to go until the start of the season their squad honestly looks a little light for a 40 game season, so therefore they’ll either be brings some more players in or could struggle. Mid table is a solid prediction. (5th)

Gangwon – Last year they had an awful start to the season but improved and finally ended up in the playoffs. Sadly them they lost in the playoffs and now seem to have also lost some funding. As a result key striker Alex has gone and nobody has really come in yet to fill that void. It’s seems like they’re planning on settling in K League Challenge for a while and therefore we feel it’s unlikely they’ll improve and even match last seasons 3rd place. (6th)

Suwon City FC – Here we have a slightly unknown quantity in Suwon City FC. They seem to be still playing at the World Cup Stadium (but may still return to the Sports Complex), their squad is still a little unclear at this point and although they had moments last season we can’t seem them improving much this year. (7th)

Daegu – A almost embarrassing 7th place finish in their 1st season outside of the K League Classic last season, coupled with a 87% drop in attendances. Daegu are sadly a side that have lost out due to the leagues expansion. It remains unclear if star forward Johnathan is still at the club, but even with him it’s looking good for Daegu and their almost empty 66,000 seater stadium. (8th)

Bucheon 1995 – After finishing bottom of the league every season of the K League Challenge so far, the only way is up for Bucheon. They signed former Ulsan forward Almir recently as well as a few other interesting Korean players. They won’t be in title contention but should at least improve on their previous seasons. (9th)

Goyang Hi – With an average attendance last season of just 584, Goyang Hi are the smallest club (supporter wise) in the league. Similar to that of East Fife from Scottish League Two (4th tier). They have been able to play above their level in the past and often pull off surprise victories. However with the continue improvements in the playing quality of other side we feel that Goyang will find it tough this season. (10th)

Chungju Hummel – Along with Bucheon Chungju Hummel have always been battling it out at the bottom. Sadly nothing has changed during the off season to make us think that this season will be any different. Also a 50% drop in attendances last year won’t have helped the budget for this upcoming season. We feel that they’ll have a hard season and will have done well to not finish bottom. (11th)

We’d like to wish all 11 teams a good luck this season. We are sure it will be a close and competitive title race once again. We also hope that fans turn up to watch a few more games and increase the attendances vs. 2014. This will hopefully lead to new sides joining the league in years to come.

Rokfootball.com – This is the currently the best site to find English speaking fan viewpoints from the K League Classic, Challenge & Lower.

If you have any comments, agree or disagree with our Prediction for the K League Challenge 2015 please feel free to let us know. Also if you have any questions about the K League or football (soccer) in Korea in general please let us know, either via email, our Social Media Homes or by commenting below.