The 2015 K League Classic (overall 22nd year of the K League) season finished at the start of December and overall it was a pretty successful and entertaining season. Although many felt it was very similar to the 2014 season, also the Summer break caused an unnecessary stoppage in the season. The quality of football, organization and average attendances (down 2.6%) all stayed about the same or dropped a little.

Jeonbuk Hyundai eased to retain their K League Classic Title with a few weeks to spare. Suwon Bluewings finished runners up (for the second season running) and Pohang Steelers finished 3rd and claimed the final AFC Champions League place. Daejeon Citizen will return to the K League Challenge after finished bottom of the league. Busan I’Park have also been relegated after losing in the Relegation Playoff vs. Suwon City FC.

Here is our summary of the K League Classic Season with the key facts, stats and thoughts: 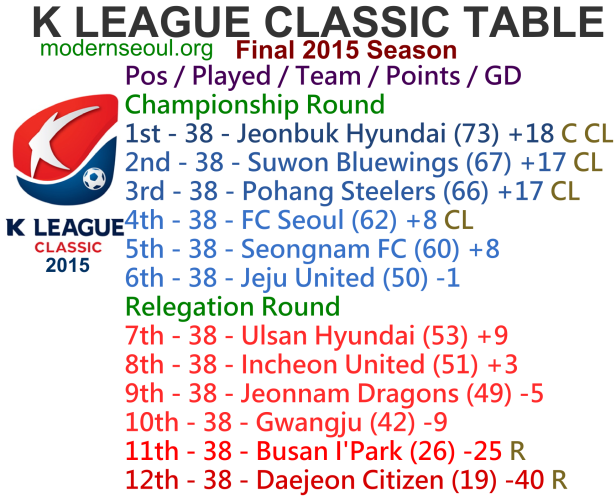 As already mentioned Jeonbuk Hyundai won the league, with Suwon Bluewings and Pohang Steelers in 2nd and 3rd. FC Seoul (4th), Seongnam FC (5th) and Jeju United (7th) complete the top half.
The bottom half was a little more entertaining towards the end of the season, Ulsan Hyundai (7th), Incheon United (8th), Jeonnam Dragons (9th) and Gwangju (10th) all retained their K League Classic statuses. Busan I’Park (11th) as already mentioned have been relegated via the playoff and Daejeon Citizen (12th) have also gone down to the K League Challenge.

Here is our Prediction from pre-season back in February, also including the changes compered to the final table:

Firstly please bare in mind that we wrote this prediction back in February a few weeks before the season started and also with limited information regarding the teams progresses during pre-season. However looking at our prediction and the end of the season table we feel that it was pretty good. We good 4 of the 12 sides in their correct positions including the top 2. Seongnam FC and Gwangju surpassed our expectations. Whilst Daejeon, Jeonnam and Ulsan were disappointing this season.

The Top Goalscorers for the 2015 K League Classic were:

Here are a few awards (basically random stats) from the 2015 K League Classic. Some maybe a little surprising whilst others less so:

Final Thoughts and Next Season

Overall we where happy with how the K League Classic 2015 went, of course however there were a few negatives. Firstly the summer break was maybe a little long and not really needed as their was no World Cup and the Asian Cup happened before the season started. Secondly the league was pretty even which is good it was a bit a déjà vu season as the top sides where basically the same as with the relegation battle. Finally attendances fell for the first time since the league re-branding, mainly due to the drop in Suwon Bluewings attendances.

On the positive side, apart from Suwon and Daejeon attendances for most sides stayed the same or rose, with Jeonbuk, Seongnam and Gwangju seeing the greatest improvements. Secondly it was an enjoyable season until the end and the end of season split seemed to work again for most sides. Finally key player seem to staying in the K League with the draw of China and Japan seeming to be fading.

Next Season; The 2016 K League Classic season will once again feature 12 teams, with the same structure. Once again there will be promotion / relegation between the K League Challenge. Sangju Sangmu and Suwon City FC will replace Busan I’Park and Daejeon Citizen. It should be an interesting season, with the Suwon City derby being a possible new highlight.

If you have any questions regarding the K League Classic, the 2015 season or if you have anything you’d like to add please let us know either here or via our social media channels.

We will try and keep things updated in regards to pre-season news as best as possible via Twitter (and maybe little via Facebook).