After a busy Children’s Day weekend of action followed by the 4th round of the Korean FA Cup during the weekend the K League Classic moves into it’s Children’s Day Tenth round of the 2016 season. The key game this weekend is the long awaited Suwon Derby between Suwon City FC and Samsung powered Suwon Bluewings. This is the first ever league meeting of these sides and it will be played in-front of partisan sellout crowd.

After just over a month the table is now starting to take shape. FC Seoul sit at the top of the table but now only on goal difference, with Jeonbuk and Seongnam following very close behind. Incheon are still at the bottom of the table, 3 points behind slipping behind the rest.

This round of games take place on Saturday (3) and Sunday (2). All of the games take place in the mid to late afternoon. Jeonbuk Hyundai and Gwangju don’t play this weekend. Here are our brief previews and predictions for the 10th round of 2016 K League Classic games;

In Saturdays early game the local derby of the day takes place as South East rivals Ulsan and Pohang square-off. Ulsan Hyundai have lost three of their last 4 league games, but won in the cup during the week. Pohang Steelers have won their last 2 games moving them upto 5th place. However they lost in the Cup against Challenge side Bucheon 1995. This will be a close game but we see Pohang edging it.
Prediction: 1 – 2

Seongnam FC have had a great start to the season and have only lost once in their 9 games. They hammered Ulsan on the road last time out as well. FC Seoul lost their last league game and needed extra time to beat Daegu in the cup during the week. In will be close but we see Seongnam edging a tired Seoul.
Prediction: 2 – 1

This is a game people have been looking forward too ever since Suwon City won their place in the K League Classic via the playoffs at the end of last season. It’s already basically a sellout, with special scarfs and other products being sold to celebrated the day.
On the field both sides have been poor recently, both have only won 1 game each this season and sit in the bottom half of the table. Suwon City also lost in the cup during the week on penalties against Daejeon, whilst the Bluewings narrowly beat Gyeongju HNP.
This will be a competitive, entertaining game played in a great derby atmosphere. However we see it ending in a draw.
Prediction: 1 – 1

Sangju Sangmu have been very inconsistent in recent weeks, winning 2, losing 2 and drawing 1 of their last 5. They also lost crashed out of the cup at the hands of Dankook University. Incheon United however have been doing worse bottom of the league without a win all season, but they have drawn 4 of their last 5. They beat K3 League side Chungju City in the cup during the week which might help their confidence. A close game on paper, however we see Sangju maybe edging it.
Prediction: 2 – 0

4th placed Jeju United returned to winning ways last weekend beating Suwon FC 5-2 on the road. They did however lost in the cup during the week. Jeonnam Dragons are currently second bottom in the table with 1 win from their 9 games. They improved during the week to win in the cup 4-0 over Gangwon. Jeju at home with have the edge here, but it maybe closer then it looks on paper.
Prediction: 3 – 1

PLEASE CLICK HERE for all of the Results and More

The K League Challenge season moves into round 10 this weekend with some teams playing their 4th game in 10 days, busy times. The highlight game of this round is on Monday evening and is between two high fliers, playoff placed Bucheon 1995 and league leaders Gangwon. Bucheon will be boosted by their shock cup win over Classic giants Pohang during the week. This should be an entertaining game. 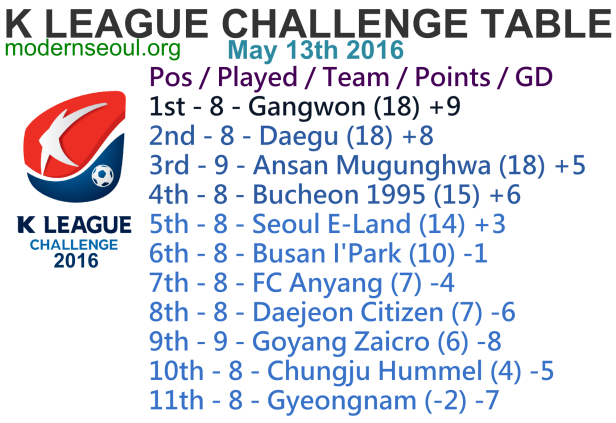 The league table is super close at the top even after 9 rounds of games, with 3 sides tied on 18 points a piece. Gangwon lead on goal difference over Daegu and Ansan, Bucheon are in the final playoff place. Gyeongnam are still bottom and 4 points adrift.

This round of games take place on Saturday (2), Sunday (1) and Monday (2). All of the weekend games take place in the afternoon, whilst the Monday games are in the evening. Here are our predictions for the 10th round of 2016 K League Challenge games;

PLEASE CLICK HERE for all of the Results and More