The K League Classic returns after a short international break for the 13th round of the 2016 season. Although one eye might be on Euro2016, save the other for these 6 fixtures. The key game this weekend is on Sunday afternoon between 3rd placed Seongnam FC and league leaders and defending champions Jeonbuk Hyundai. Starting from this week the key game will have it’s own special post, including previews, prediction and head-to-head details (PLEASE CLICK HERE – Seongnam FC vs. Jeonbuk Hyundai June 12th). 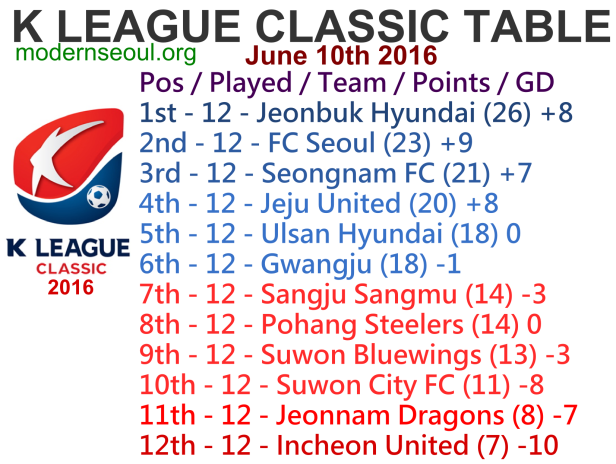 As we move into the hot summer months the league title has taken shape. Jeonbuk have a 3 point lead at the top over FC Seoul, Seongnam and Jeju United in 2nd through 4th.
At the other end of the table, Incheon United are still bottom a single point behind Jeonnam. Suwon City & Suwon Bluewings a little above them. 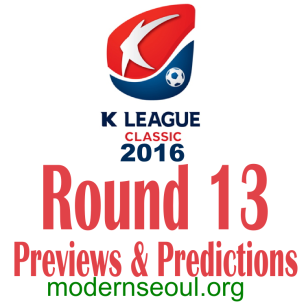 This round of games take place on Saturday (3) and Sunday (3). All of the games take place in the late afternoon to early evening. Here are our brief previews and predictions for the 13th round of 2016 K League Classic games;

Ulsan found some impressive form during May and moved up into the top half of the table. 3wins, 1draw and 1defeat in the league. Sangju Sangmu on the other hand were a little more inconsistent with 2 wins but also 3 defeats. Ulsan will be favorites coming into this one.
Prediction: 3 – 1

Suwon Bluewings have had a 2016 to forget so far, crashing out of the Champions League in the group stage, and a poor league campaign were they’re in the unknown territory of the bottom half of the table. Incheon United sadly have found life even more difficult. Winning for the first time this season a few weeks ago against Seongnam. The previous encounter between these sides ended 1-1 and we feel that this might end the same way.
Prediction: 1 – 1

Jeju United found some uncharacteristic away form last time out beating high flying FC Seoul 4-3 in a classic at the world cup stadium. That was their third win in 4 games. Gwangju have found a little bit of form in recent weeks winning 3 of their last 4 and draw the other against league leaders Jeonbuk Hyundai. Gwangju have beaten Jeju the last two times these sides have met, however we see Jeju gaining a little revenge here.
Prediction: 2 – 1

Jeonnam come into this game knowing that to avoid this seasons relegation battle they’ve got to find some form. They have only won once so far this season, strangely against Pohang Steelers. Pohang are also in the bottom half of the table, they have the best defence in the league, their issue has been scoring. Pohang should have the edge here, however this wouldn’t be the prettiest game of the weekend.
Prediction: 0 – 1

Suwon City FC host this weekends final game. The promoted side have been competitive in the Classic so far this season, but have lost 4 of their last 5 league games. FC Seoul dropped points in their last 2 league games and tiredness was blamed. No excuses this weekend, as a win could take them top again. We see Seoul winning on paper, but Suwon City will make a game of it.
Prediction: 0 – 2 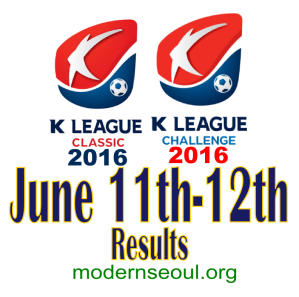 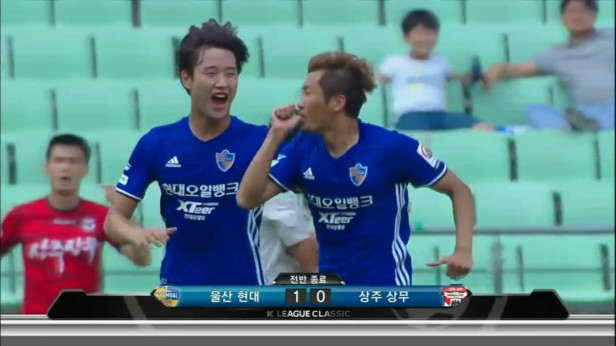 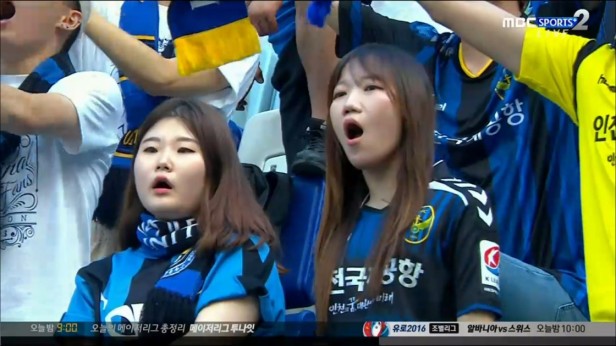 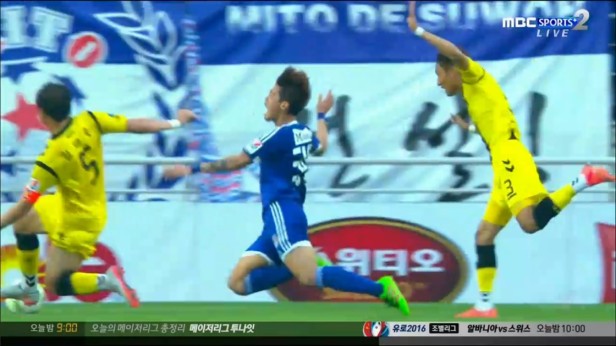 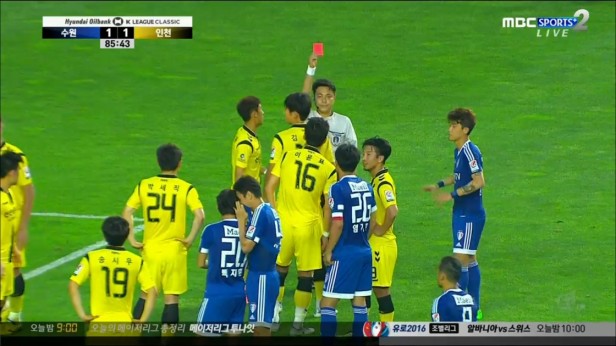 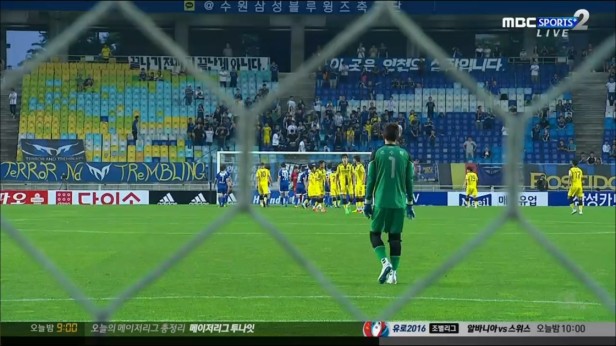 The K League Challenge season moves into round 17 this weekend, the 4th round already this month. The highlight game of this round is the Saturday afternoon clash between playoff placed Daegu and 5th placed Seoul E-Land. Seoul have be completely lacking form recently losing 4 of their last 5 in the league. So this will be key in kick-starting their season, but also a win for Daegu would help them in the promotion race. 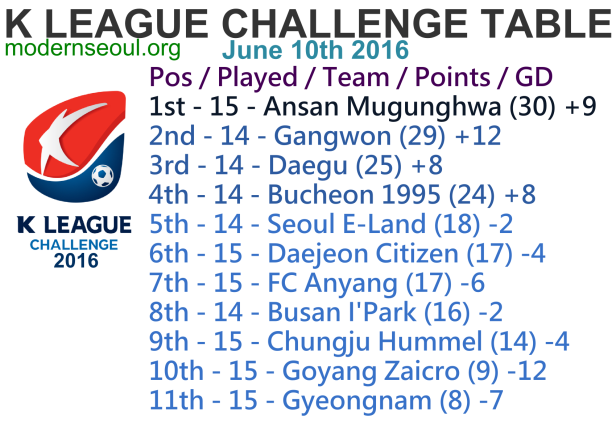 The league table has started to breakup a little with obvious gaps at the top and bottom. Ansan lead the way, ahead of Gangwon, Daegu and Bucheon in the playoff places. Goyang and Gyeongnam a slight adrift at the bottom of the table. 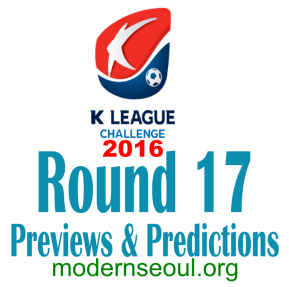 This round of games take place on Saturday (2), Sunday (1) and Monday (2). The games take place in the late afternoon and early evening. Here are our predictions for the 17th round of 2016 K League Challenge games; 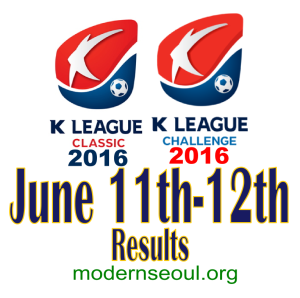 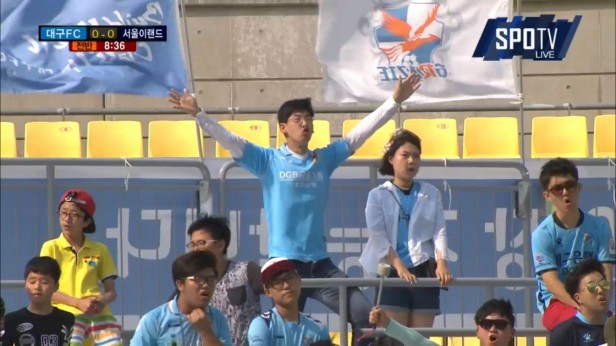 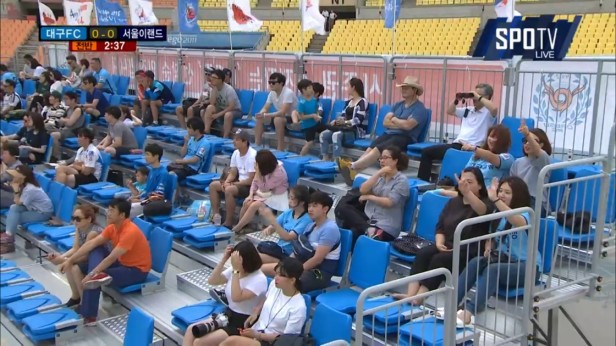 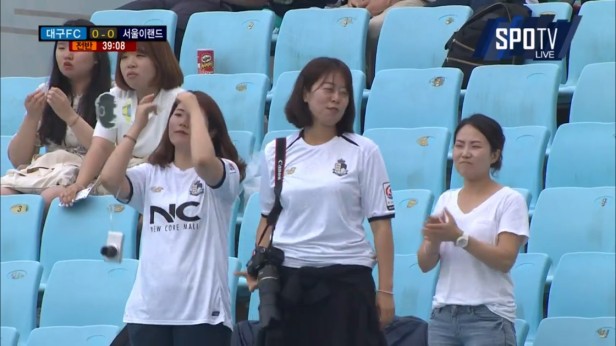 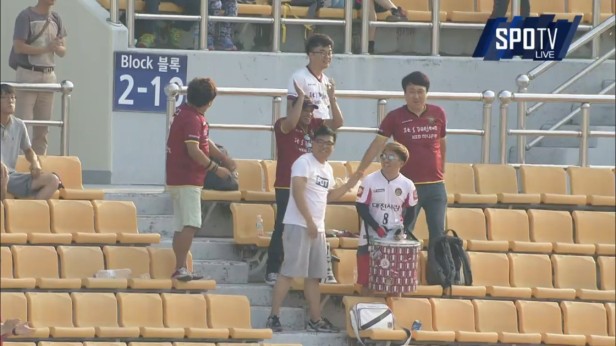