During the 2016 Olympics hosted in the Brazilian City of Rio De Janeiro there will be medals awarded in 28 different sports. However for many the blue ribbon discipline is the Athletics (Track & Field).
The Athletics events take place during the middle weekend and second week of the games, starting on Day 7 (Friday August 12th) and finishing on Day 16 (Sunday August 21st). Most of the build up to the athletics hasn’t been very positive focusing on the Russian Doping Ban instead of focusing on the sport.
Although this isn’t a sport South Korea isn’t very competitive in, most (if not all) of the finals will be shown on Korean TV.
It’s useful to remember for the Olympics as a whole that the time difference between Seoul and Rio De Janerio is around 12hrs. So the morning events take place in the evening Korea Time and the Evening events in the morning.

Here are the key dates and times for the Rio 2016 Olympics Athletics Finals with Korea start times;

Women’s Shot Put at 10am

*Start times at subject to change*

South Korea has an athletics squad of 15 athletes, 10 men and 5 women. 7 of them will be competing in the Road Walking Races, 4 in the Marathon and 3 in field events. Just one has been entered into/qualified  for the track events. For a nation that hosted the Asian Games just 2 years ago and the World Athletics Championship 5 years, you’d feel that a few more Korean Usain Bolts might have been discovered. At the 2014 Asian Games they won 10medals in the athletic events. However here are the South Korean Competitors with as much information has we could find;

Kim Kuk-Young
He has a personal best of 10.16 a national record set last year. Has a bye into the 2nd round quarter finals.

Update: Failed to progress from the 1st round / Quarter Final with a time of 10.37

Update: Kim Hyun-Sub finished in 17th place, with Byun Young-Joon and Choe Byung-Kwang some way behind in 61st and 57th.

Update: Finished 14th with a jump of 7.82m in the Qualifying Round and sadly did advance to the final.

Update: Failed to progress to the triple jump final with a best of 16.32m 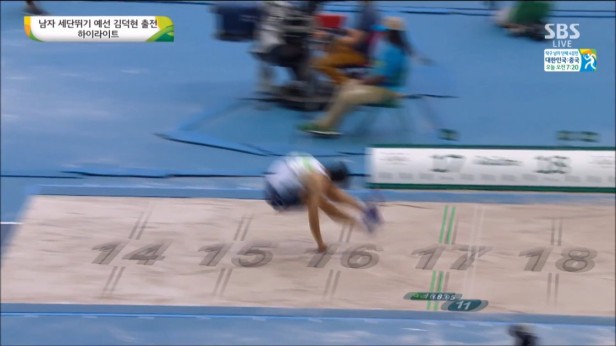 Woo Sang-Hyeok
20years old and a former World Youth Champion. PB 2.25m set in July.
Yun Seung-Hyun
Made the final of the Asian Games, has a PB of 2.32m set last year.

Update: Both failed to make the final in a difficult competition.

An Seul-Ki
Set her personal best of 2hrs 32.15mins this March in Seoul.
Lim Kyung-Hee
33years old and finished 76th at the London 2012 Olympics.

Firstly a couple of websites that we referenced for the information;