Even though the rest of the league is having some time off during this period of International Fixtures and World Cup Qualifying, we do have one game in the K League Classic. FC Seoul take on Ulsan Hyundai in a fixture moved forward a few weeks. FC Seoul are currently in 2nd position and still in both the Korean FA Cup and Asian Champions League, whilst opponents Ulsan Hyundai are 2 places below them in 4th.

Here is our brief preview, head-to-head details and prediction for FC Seoul vs. Ulsan Hyundai;

FC Seoul:
FC Seoul are 4 time K League champions, most recently back in 2012. They lost this past Sunday to runaway leaders Jeonbuk Hyundai 3-1 at home, however this did win impressively in the Champions League 3-1 against Super League side Shandong Luneng just before that. In the league they had won 5 league games on the bounce, before losing to Jeonbuk. Also this season their home record is weaker than their away only winning 6 of their 14 home games. They are also the leagues joint top scorers (with Jeonbuk) with 53 goals so far this season.
Key Player: In-form Dejan Damjanović is the clubs record goalscorer and even at 35 still knows how to find the back of the net. Recently he has 8 goals in the last 9 games, including one recently against Shandong Luneng. We was missed against Jeonbuk and fingers crossed he returns for this encounter.

Ulsan Hyundai have look much improved this season pushing for a valuable Champions League Qualification spot. However their recent form has been awful with only one win in 8 games, and that was against lowly Suwon FC. There did draw 3 of those games which has kept them in the top half race. Their away form this season has been mixed with 6W, 4D and 4L, their strength away from home has been their defence. They drew their last game last weekend against Gwangju conceding in the final minutes.
Key Player: Croatian Midfielder Ivan Kovacec has been ever-present this season and is the sides top goalscorer, including two in their last win against Suwon FC. He will be important if Ulsan want to take home anything from this game.

Head-to-Head:
They’ve played 44 times and the record is tight with FC Seoul having the advantage winning 14 times, Ulsan have 13 wins and there have been 17 draws.
At the Seoul World Cup Stadium, Ulsan have the advantage with 6 wins; however this game has ended all-square 12 times when played in Seoul.
So far this season Seoul have won once 2-1 (away) and the other game ended 0-0, a couple of months ago.
Seoul haven’t beaten Ulsan at home since November 2012 when they won 3-1, Dejan scored the 3rd goal for the victors.

Seoul are weaker at home however Ulsan have on a really weak run of form which means we see Seoul edging this one. Ulsan will be defensively strong, however lack going forward and a so a single goal could be the difference.

FC Seoul 2 – 2 Ulsan Hyundai
After a dull first half the game to life in the second. Seoul scored 2 goals from Ko Gwang-Min and Adriano without reply pretty early on and looked to finish the game. However Kovacec punished some stack Seoul defending after 68mins. Seoul seemed to held on, but Ulsan broke the defensive line in the 94th minute to allow Kim Seung-Jun to equalize and take home a point. 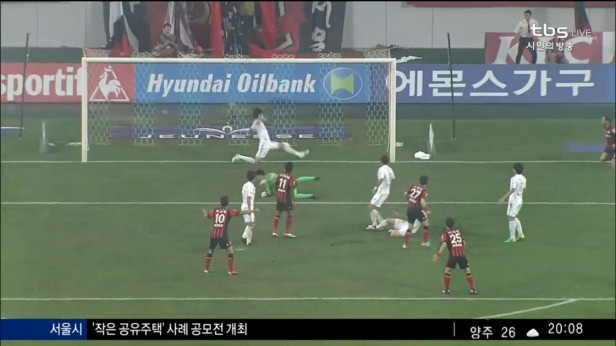