The late Summer cooler evenings are now here and hopefully that will lead to some faster paced action of the field in the K League. There are only 3 rounds remaining until the league split so this is a key time to find some form. The highlight game of this midweek round is the bottom of the table clash between 10th placed Pohang Steelers and bottom side Incheon United, Pohang have found themselves in the relegation battle but could escape with a win here. Incheon also desperately need a win. 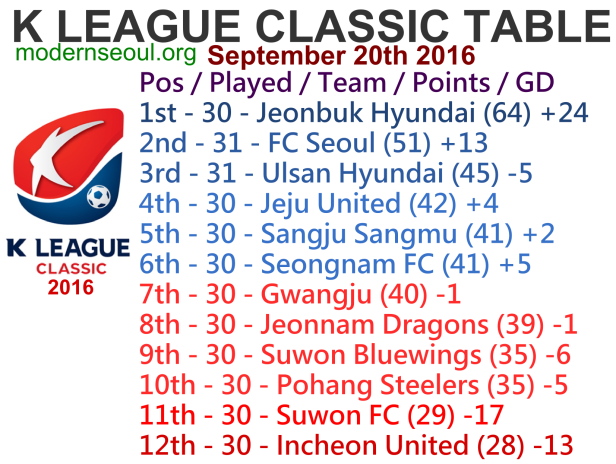 As we move quickly towards the end of season league split the table is still close in the middle. Jeonbuk now have a 13 point lead and a game in hand at the top over FC Seoul. With Ulsan Hyundai 6 points behind them in 3rd. With Jeju United 3 points behind them. There are only 3 points separating 4th and 8th, so the mid table battle is very tight.
At the other end of the table, Incheon United are still bottom, but are only a single point behind Suwon FC in 11th. Pohang Steelers and Suwon Bluewings are 6 points ahead of them.

This round of games all take place on Wednesday (6). The games take place in the early evening between 7pm-8pm. Here are our brief previews and predictions for the 31st round of 2016 K League Classic games;

This midweek of action starts down in Gwangyang as 8th placed Jeonnam Dragons take on 5th placed Sangju Sangmu. These sides are only separated by 2 points. Jeonnam have been a strong run of form with 2 wins and 2 draws from their last 4 games. Sangju on the other hand have been struggling with only 1 win in 7, and they’ve only scored once in their last 4 games. We see Jeonnam edging this one.
*Fun Fact: Sangju have beaten Jeonnam twice this season.*
Prediction: 1 – 0

The second of the 7pm kick offs comes from the Guus Hiddink Stadium as Gwangju take on Suwon Bluewings. Both sides are in the bottom half and looking to make a late run for the top half. Gwangju lost for the first time in 7 games at the weekend, in a very very very wet game against Jeonnam. Suwon have drawn 5 of their last 7 games, 4 of them 1-1. Suwon seem to be draw magnets so that seems the likely outcome.
*Fun Fact: Gwangju have never beaten Suwon at home.*
Prediction: 1 – 1

The next encounter features sides at opposite ends of the table as Suwon FC (11th) host FC Seoul (2nd). Suwon FC have won 3 of their last 5 games, but were beaten at the weekend by Seongnam. FC Seoul are seriously lacking form, no win in 5 games and so the title seems unlikely. This is a hard one to call as if Seoul turn it on again they’ll win, if not Suwon will. We’re siding with Seoul (narrowly).
*Fun Fact: FC Seoul have won both past encounters 3-0.*
Prediction: 1 – 2

This game features two sides in the top half of the table, as 3rd placed Ulsan Hyundai host 6th placed Seongnam FC. Ulsan only have 2 wins in 11 games,  but did beat Pohang at the weekend. Seongnam FC have a similar record with only 2 wins in 10, but also won at the weekend. Ulsan should have the advantage at home, but this one looks close on paper.
*Fun Fact: It’s been 4 and a half years since Ulsan last beat Seongnam at home.*
Prediction: 2 – 1

This is the relegation 6-pointer as 10th placed Pohang Steelers take on bottom side Incheon United. Pohang have only 1 win in 8 games, and have lost their last 3 games on the bounce. Incheon United haven’t done any better with only one win in 9, but they do look better under caretaker boss Lee Ki-Hyung. This won’t be a pretty game and we see it ending all-square.
*Fun Fact: Pohang have won the last 3 encounters between these sides.*
Prediction: 1 – 1

The last game of the round take place on the Orange Island as Jeju United host runaway leaders Jeonbuk Hyundai. Jeju United have found some form recently with 2 wins and 2 draws from their last 4. Jeonbuk Hyundai are still undefeated in the league this season, but are weaker away from home. This seems like a possible draw, however we’re siding with Jeonbuk edging it.
*Fun Fact: These sides haven’t drawn in their last 8 encounters.*
Prediction: 1 – 3 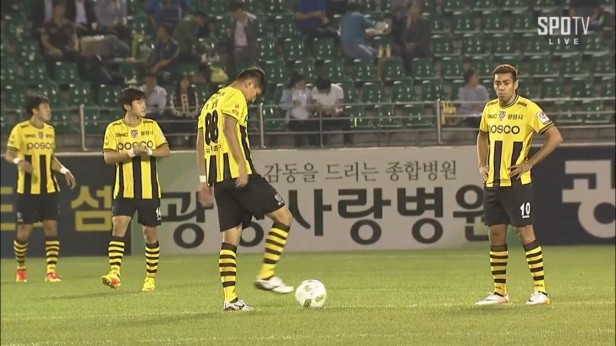 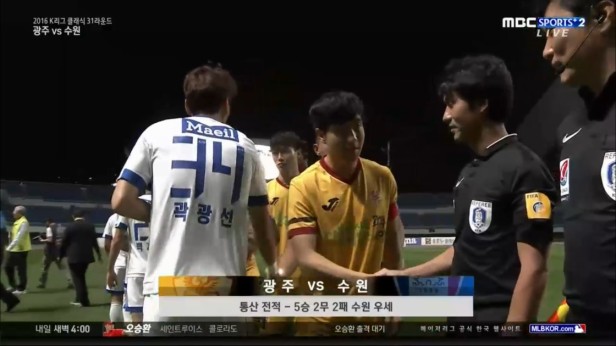 The K League Challenge returns this weekend with it’s 36 round of the 2016 season.