The K League Challenge reaches the 42nd (of 44) round of the 2016 season with it’s final midweek round of the season, with sides only having either 2 or 3 games still to play this season. Also due to the fact Ansan Mungunghwa are ineligible for promotion the title and playoff races are wide open. This round includes a number of interesting games, however for us the standout game is the 2nd vs. 3rd clash between Daegu and Bucheon 1995. This game could realistically decide the 2016 title and the only automatic promotion place. Also 30mins later we have Busan I’Park vs. Gangwon which is a key game in the playoff picture as well as promotion. 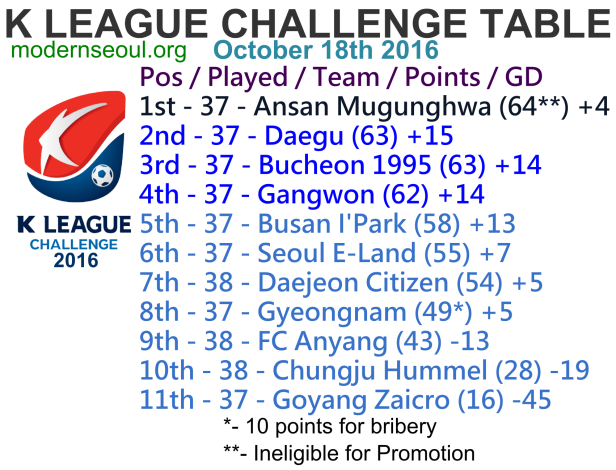 The league table is looking close even with only a few games still to play, Ansan Mugunghwa lead the way but following an 8-1 defeat at the weekend seem to have given up. They are followed by Daegu, Bucheon 1995 and Gangwon. Just behind them we have Busan I’Park who are currently in the final playoff place. Seoul E-Land and Daejeon Citizen still have slim chances of making the playoffs but can’t afford to lose. Gyeongnam, FC Anyang, Chungju Hummel and finally Goyang Zaicro will be looking towards the 2017 season at this point.

These results mean that Daejeon Citizen and Gyeongnam are now mathematically out of the playoff race.