The K League Classic continues this weekend with it’s second round following the league split. There are only 4 rounds to go until the end of the season. The top 6 sides enter the Championship round to compete for the title and the Champions League places. Whilst the bottom 6 sides try to avoid the pain of relegation down to the Challenge.
The key game in the Championship Round is on Saturday between leaders Jeonbuk and 4th placed Ulsan Hyundai in the Hyundai derby. Of course the FC Seoul is important with the title race being so close.
In the relegation round the Sunday game stands out. It’s between Pohang Steelers and Suwon FC, a win for Pohang would reduce their relegation worries, whilst bottom side Suwon can’t afford to lose anymore ground on the sides ahead of them.

Due to Jeonbuk’s point reduced they are now level on points with FC Seoul, only goal difference separates them. Jeju United are 8 points between them and currently occupy the final champions league spot. Ulsan, Jeonnam and Sangju all have slim chances of making the top 3 positions.
Looking at the bottom of the table, Suwon FC are 3 points behind Incheon United, who are 2 points behind Suwon Bluewings. 4 points ahead of them we have Pohang and Seongnam who aren’t safe from danger yet. Gwangju lead the relegation round and will feel safest.

This round of games take place on Saturday (3) and Sunday (3). Five of the games take place at the Traditional English Football time of 3pm, whilst one is at 3.20pm. Here are our brief previews and predictions for the 35th round of 2016 K League Classic games;

Saturdays first game is the Hyundai Derby between Ulsan and Jeonbuk. Ulsan have lost their last 2 games and might rest players with the FA Cup semi coming up on Wednesday Evening. Jeonbuk progressed to the Champions League Final despite losing their 2nd leg to FC Seoul during the week. They also lost last weekend to Jeju United. We see this one ending in a draw.
Prediction: 1 – 1

FC Seoul host their 3rd home game in 7 days when they take on Sangju Sangmu. FC Seoul have won 4 out of 5 in all competitions recently, and beat Jeonbuk during the week in the Champions League (but went out on agg). Sangju Sangmu haven’t won in over 2 months and have suffered from many key players returning to their parent clubs. FC Seoul will be big favorites here.
Prediction: 2 – 0

Sundays only game in the top half features 3rd placed Jeju United and 5th placed Jeonnam Dragons. Jeju only require a few more wins to confirm an Asian Champions League spot, they have won 3 on the bounce. Jeonnam have only lost once in 8 games, but a champions league spot seem a little unlikely at this point. We see Jeju edging this one.
Prediction: 2 – 1

Pohang have eased their relegation worries by taking 7 points from their last 3 games. Another couple of wins and they’ll be safe. Bottom side Suwon FC are 3 points adrift following a defeat to Gwangju last weekend. However they’ve beaten Pohang 3 from 3 this season. However we see Pohang making it 3-1 between these sides.
Prediction: 3 – 1

The final of the weekend comes from the Sungui Arena as Incheon host Gwangju. Incheon are one of the leagues form sides and are generally stronger at home. They’ve won 3 and drawn 3 of their last 6 games. Gwangju on the other hand only won for the first time in 5 times last weekend. Incheon win be the favorites here to take the vital 3 points.
Prediction: 1 – 0 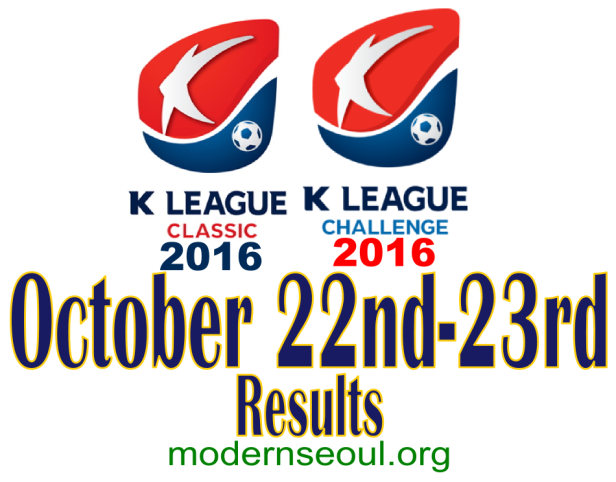 Jeonbuk Hyundai and FC Seoul stay tied at the top as both sides drew. Suwon Bluewings opened up a 5 point gap over Incheon United at the bottom, Incheon host Gwangju on Sunday.

Jeju cement their place in the Asian Champions League spots with a win on Sunday afternoon. Incheon and Suwon FC both picked up wins to make the relegation battle even tighter with only 3 games remaining this season. Here is the table following this weekends games; 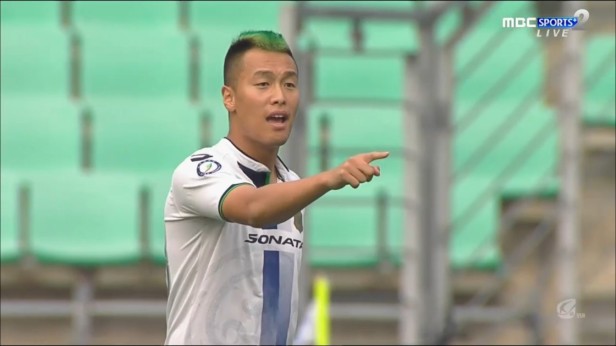 The K League Challenge reaches the penultimate round of the 2016 season this weekend, with most of the sides only having either 2 games still to play this season. Also due to the fact Ansan Mungunghwa are ineligible for promotion the title and playoff races are wide open. This round includes a number of interesting game, however for us the standout game for us is on Sunday afternoon between 3rd placed Bucheon 1995 and 5th placed Busan I’Park. A win for Busan will basically confirm a playoff place, whilst Bucheon 1995 still have a strong chance of claiming the automatic promotion place into next seasons K League Classic.

Also news broke during the week that Cheongju FC won’t be joining the 2017 K League Challenge, due to a lack of support from the local government. That may or may not change this decision. 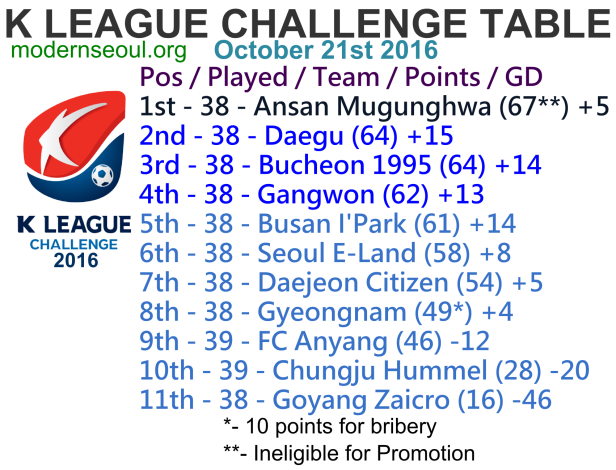 The league table is looking close even with only a few games still to play, Ansan Mugunghwa lead the way 3 points clear at the top. Followed by Daegu, Bucheon 1995 and Gangwon. Just behind them we have Busan I’Park who are currently in the final playoff place. Seoul E-Land still have slim chances of making the playoffs but can’t afford to lose. Daejeon Citizen, Gyeongnam, FC Anyang, Chungju Hummel and finally Goyang Zaicro will be looking towards the 2017 season at this point.

This round of games take place on Saturday (2) and Sunday (3). The games all take place in the afternoon, anywhere between 1.30pm-3pm. Here are our predictions for the 43rd round of 2016 K League Challenge games;

Seoul E-Land kept their slim playoff chances alive by beating bottom side Goyang. Ansan Mugunghwa lost their final ever home game heavily to Gangwon, who are still in the hunt for the title and automatic promotion spot. 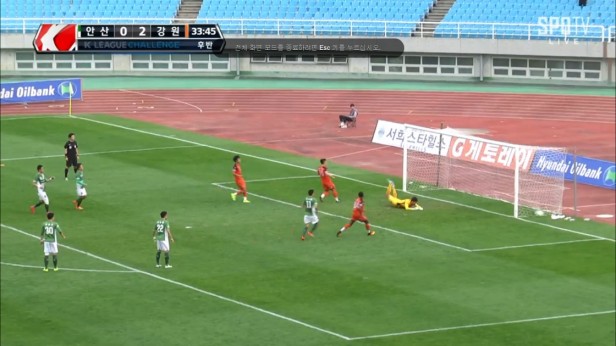