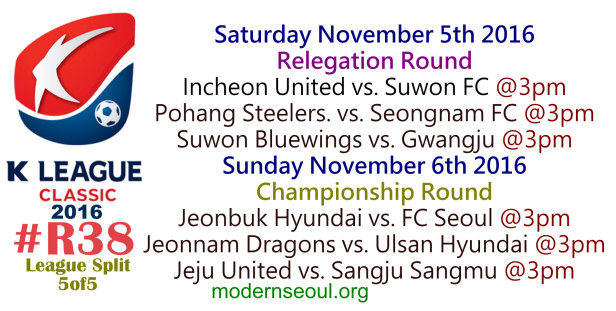 It all comes down to this with both the title and relegation battles culminating in this final round of the season. The relegation round finishes on Saturday, whilst the title and championship round comes to an end on Sunday afternoon.
The key game in the Championship Round is of course the title decider between Jeonbuk Hyundai and FC Seoul, it’s a big game and hopefully it will be a classic.
In the relegation round the highlight match is between Incheon United and Suwon FC, Suwon FC have to win by 3 goals to stand a chance of surviving. Whilst Pohang and Seongnam, will be hoping Incheon don’t win as that will send one of them into the relegation playoff. 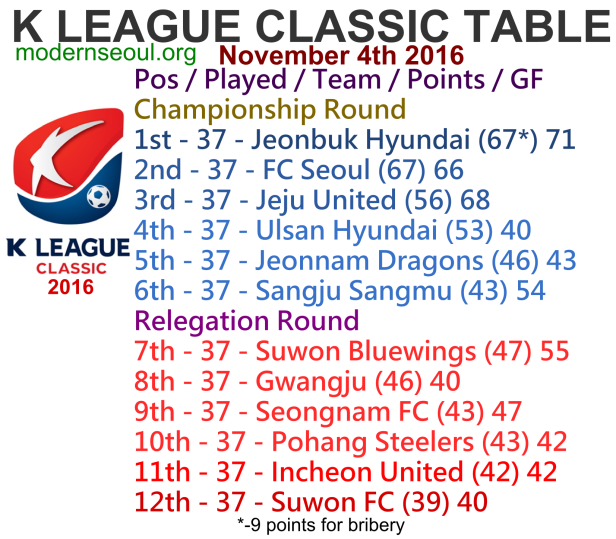 Championship Round: Due to Jeonbuk’s point reduction they are now level on points with FC Seoul, only goals scored separates them (the K League favors this over goal difference). As they play either other their game alone will decide the title, a Jeonbuk win or draw will give Jeonbuk Hyundai the title. FC Seoul have to win. Jeju United are in 3rd and it would take an Ulsan win, a Jeju defeat and a 28 goal swing for them not to finish 3rd. Jeonnam Dragons and Sangju Sangmu are playing for pride.

Relegation Round: Looking at the bottom of the table, Suwon FC are 3 points behind Incheon United, they play each other and Suwon FC have to win by 3 goals to finish above them. If Incheon win, the losers of Seongnam v Pohang or Pohang if they draw will enter the relegation playoff. Finally if Incheon and Suwon draw, it might come down to goals scored. Basically no one can afford to lose and they all need to win.

This round of games take place on Saturday (3) & Sunday (3). All of the games kick off in the evening at 3pm. Here are our brief previews and predictions for the 38th round of 2016 K League Classic games;

The relegation battle all comes down to this final 90minutes of the season. Incheon United have been on outstanding form recently winning 5 of their last 9 (drawing 3), but they lost during the week against Suwon Bluewings. Suwon FC have surprised many by putting together a competitive squad in their first ever K League Classic season. Sadly they can be inconsistent, their reason form proves this as they’ve won 2 but also lost 2. We see an exciting game but Incheon will take control in the 2nd half, it’s also unlikely both sides will finish with 10men.
Prediction: 3 – 1

Both of these sides will have half an eye on the game over in Incheon, as a draw might not be enough for both of them. Form wise neither has won since the league split and both have struggled most of the season. This is a tough one to call, but honestly we see Pohang grabbing a narrow win.
Prediction: 2 – 1

The final game is a bit of a nothing match, both sides are safe and Suwon might play a weaken side ahead of the FA Cup Final in a couple of weeks time. Suwon have won 3 straight, but Gwangju have a habit of finding late goals. So we see this one ending in a draw.
Prediction: 1 – 1

Few would have guessed that the title would come down to the final game of the season, but here we are. Jeonbuk and Seoul have already played each other 5 times this season in all competitions with Jeonbuk holding a 4-1 lead over Seoul. In the past few years these sides haven’t drawn often so here’s hoping for another open game. Jeonbuk Hyundai have lost once in the league at home all season, however FC Seoul are strong away from home. This is a close game on paper, however Jeonbuk seem to be able to find that little something extra and so we see them winning this one and taking the title.
Prediction: 3 – 2

The first of two games that’s very much over shadowed by the main event title decider. Both sides are playing for pride at this point, and might use this game to give some of their squad players a run out before heading into post-season duties. We honestly can’t see a standout winner, but as Jeonnam are at home we’ll give them the edge.
Prediction: 2 – 1

Jeju United have the Asian Champions League to look forward to next season (at least the playoff), whilst Sangju Sangmu will be thankful they made the top half and avoided the relegation battle. Jeju United are in form and are strong at home, whilst Sangju look like their season finished weeks ago, we see Jeju winning this one.
Prediction: 2 – 0 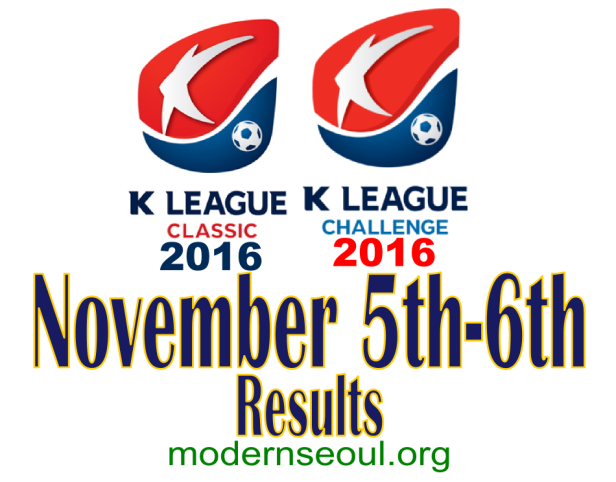 Well firstly our prediction came true (sorry Seongnam Fans). Suwon Bluewings and Gwangju drew as they were both safe. Pohang held on to beat Seongnam and secure safety. Incheon beat Suwon FC in a game that somehow finished 1-0, both sides should have scored at least 3 each.
This means Suwon FC are officially relegated and Seongnam enter the relegation playoffs against Gangwon. A tough game for Seongnam as it’s extra cold in Gangwon during these late autumn months. 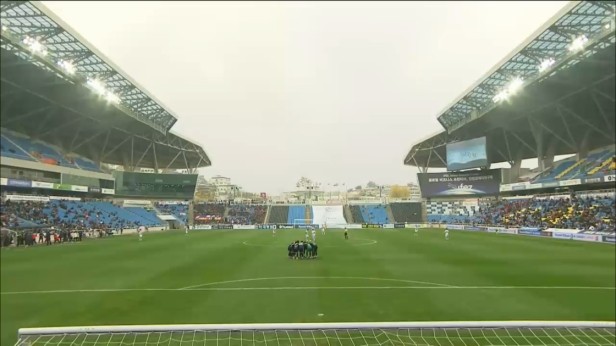 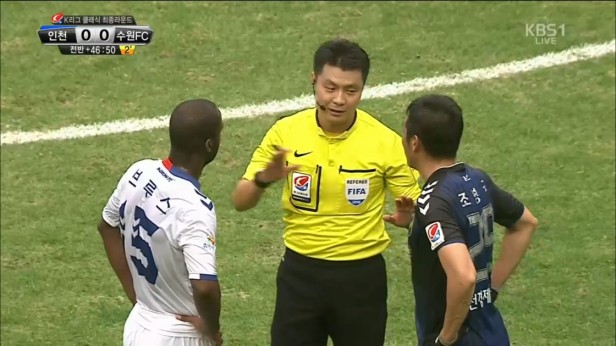 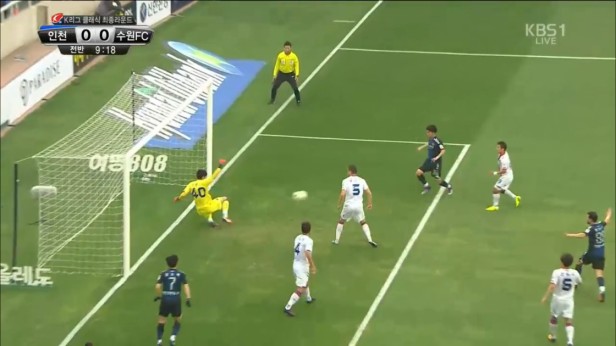 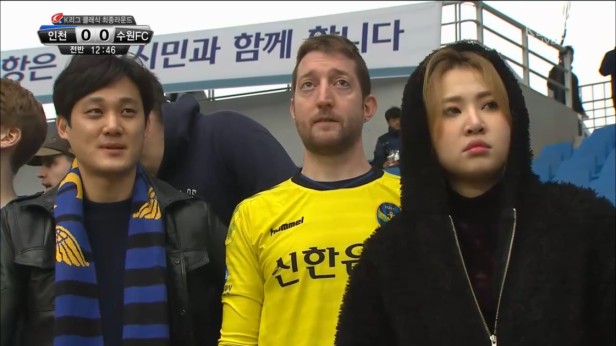 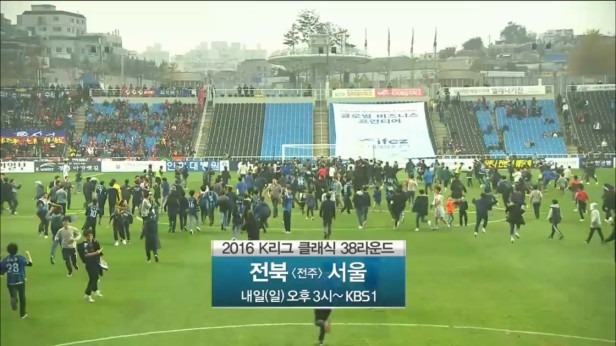 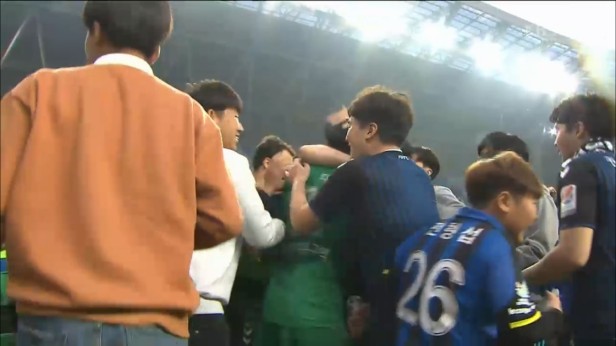 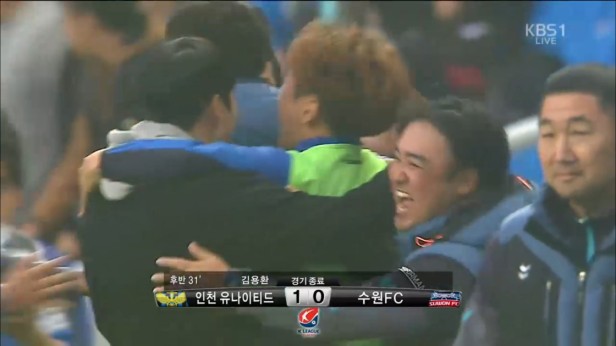 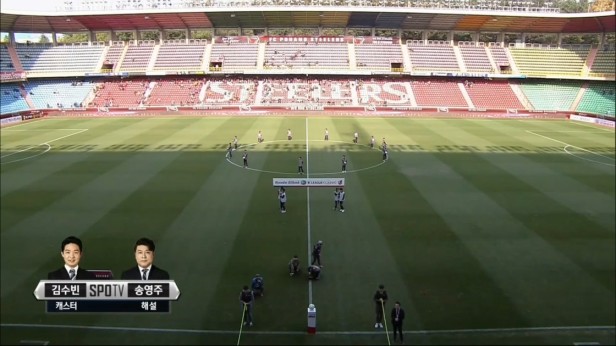 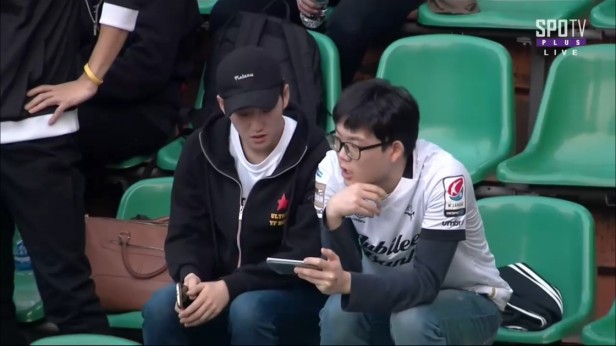 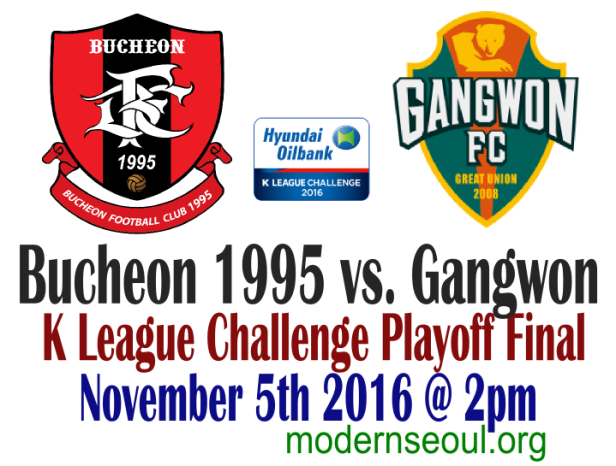 The K League Challenge season all comes down to this as the winners will progress to a 2-legged playoff against the 11th placed K League Classic side. Bucheon 1995 have had a memorable season reaching the FA Cup Semi-Finals and knocking out 2 Classic sides on the way. Gangwon didn’t play their best on Wednesday but beat Busan I’Park none the less. Bucheon 1995 have beaten Gangwon 3 out of 4 games this season. However we see a closer game and maybe a draw in the end (Bucheon progress with either a draw or win).
Prediction: 1 – 1

Both sides ended to game with only 10 men, but it was Gangwon who where able to grab a 95th minute winner and a place in the Playoffs against Seongnam. It was also Gangwon who took the lead in the first half. But Bucheon pegged them back despite being a man down. However Luiz found a yard 0f space in the box in the dying moment to put Gangwon 2 games away from promotion. 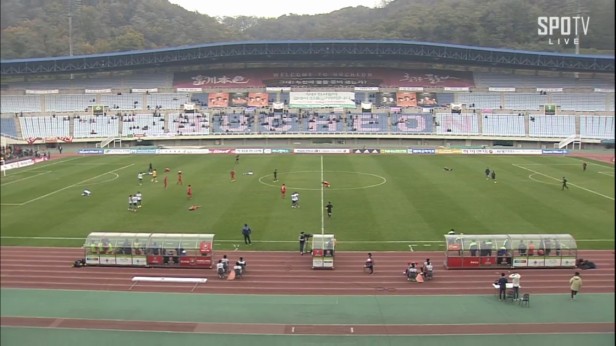 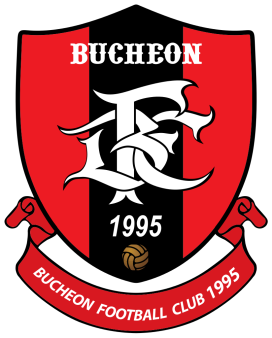 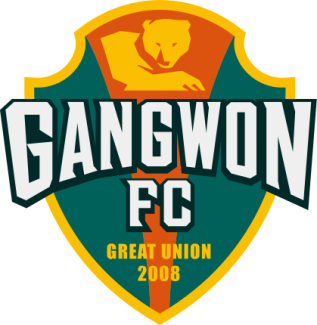