Recently we’ve been asked by a number of people about how to get into supporting a local Korean Side and what teams are there outside of the professional K League. So we put together a brief guide to the Korea National League (N-League), which is the Third Tier of South Korean Football. Sadly the information currently available in English is limited and often out of date. Although we don’t know the league intimately, we at least know the basics. For more detailed there are links below;

Firstly here are 5 key fact about the Korea National League;

1 – The Korea National League has been running since 2003, and although Semi-Pro on paper most of the players are full-time.

2 – Over the years there have been 16 different teams compete in the League, however as of 2017 there are only 8.

3 – The League Season runs from March to October, generally with a short summer break.

4 – The National League is the 3rd tier of Korean Football, below the K League (Classic and Challenge) and above the K3 League (Advanced and Basic). Currently there is no promotion or relegation between the leagues.

5 – The most successful National League Team and current champions are Ulsan Hyundai Mipo Dolphins winning the title 8 times (including the past 4 years). However they dropped out of the league at the end of 2016.

Secondly we have 5 points to know about the National League, these are a mixture of fact and opinion;

1 – Although most of the players are full time pros the quality of football can vary, its a little below the K League Challenge standard and maybe similar to English National League North/South (on average).

2 – Nearly all of the teams play in large multi-propose stadiums, which can mean no roof, a running-track which creates a gap to the pitch and also many empty seats. Nearly every game has under 10% of the stadium filled.

5 – As the map below shows a number of the sides, Mokpo especially play in cities with no big teams. So they give you the chance to support a local side.

Map for the Korea National League 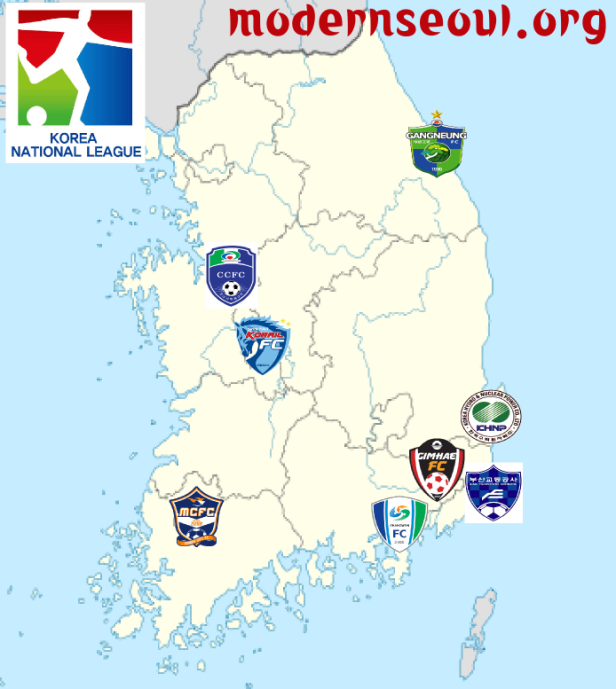 As the above map shows National League teams come from across country, however there are 4 sides based in the South East. 3 of the sides have K League teams playing in the same city Busan, Daejeon and Changwon who ground share with Gyeongnam. Also as the map shows there are no sides currently from the Seoul area, with only Cheonan based in the North West.

Here are the 8 sides that will contest the 2017 Korea National League (N-League); 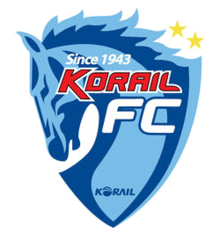 Here are a few useful links;