The 7th game in the Final Round of World Cup Qualification for South Korea takes place on Tuesday evening and it’s an important clash between South Korea and Syria. Syria of course have problems at home, but that seems to be pushing the Nation team to succeed. South Korea on the other hand are lacking direction at the moment, which is disappointing for one of the most successful Asian Footballing Nations.

Qualification for the 2018 World Cup started for AFC Member Countries back in March 2015 with a small knockout round featuring the lowest ranked Asian Nations. After this the big boys such as South Korea and Syria joined in a 2nd Round Group stage. Both progressed to this 3rd round stage.

The group A table in still tight in the middle with Syria bridging the gap winning last week. Iran are moving clear at the top, whilst Qatar and China PR cannot afford to drop anymore points. 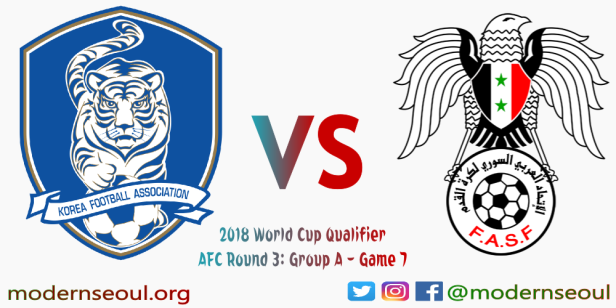 South Korea:
South Korea have a strong recent history regarding World Cup Qualification, having made the finals 8 times on the bounce now. With their best performance coming in 2002 when they reached the Semi-Finals on home soil. Now under the leadership of German coach Uli Stielike they looked OK so far during qualification, easing past the 2nd round group stage. During this round stage they’ve produced mixed performances with defeat to Iran and China plus a draw vs. Syria issues, they won the other 3 games all of which were at home.
Key Player: Tottenham Hotspur Striker Son Heung-Min (valued around $30million) is on impressive form in the Premier League this season. This form usually applies to the national side and so he’s the key danger man. He’s scored 7 goals during qualification and will be looking to energize the Seoul World Cup Stadiums crowd (if he plays).

Syria:
Syria have never qualified for the World Cup Finals but have progressed to the Asian Cup Finals most recently in 2011. During this qualification campaign they finished runners-up in their group only behind Japan, and they won 6 games against the rest of the group; Singapore, Afghanistan and Cambodia. They produced an impressive display last week to beat Uzbekistan and keep their world cup dreams alive. They don’t always produce exciting games.
Key Player: Firas Al Khatib is the most experienced member of the Syrian squad with 52 caps and 26 goals. He scores important goals and scored once before against Korea back in 2006. Captain Ahmad Al Salih is also a key member of the defensive.

Head-to-Head:
These sides have played each other 7 times with the first encounter coming back in 1978 with the record looking like this;
South Korea 3
Draws 3
Syria 1
The single win for Syria way back in 1984 during the Asian Cup. The last time these sides played it ended 0-0 last September, this was also the only ever previous World Cup Qualifier.

South Korea need to win, anything else here would be a disaster. Syria are very defensive and look to counter-attack, so this won’t be a high scoring game. 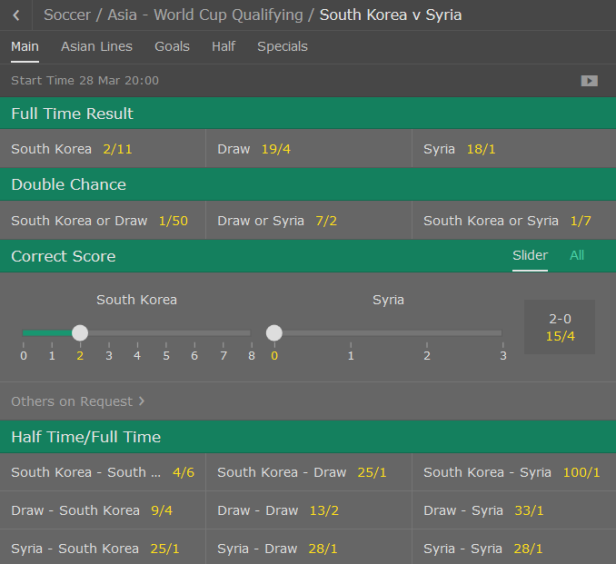 South Korea 1 – 0 Syria
South Korea scraped past Syria on Tuesday evening, scoring an early goal and holding on for 84minutes. It is a much needed win, however games in the summer vs. Iran and Uzbekistan will be much more difficult.