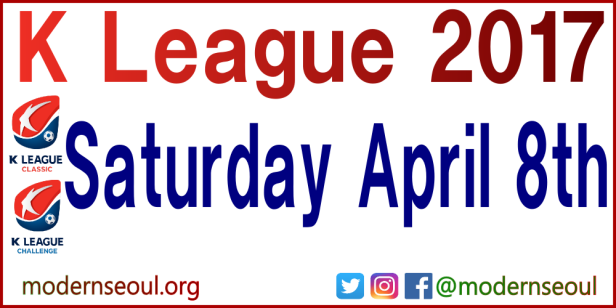 The K League Classic continues this coming Saturday afternoon with an extended card of matches due to the upcoming Asian Champions League Fixtures. Its been an interesting and even start to the season, but now we’re in April clubs will start to cement either championship hopes or relegation issues. 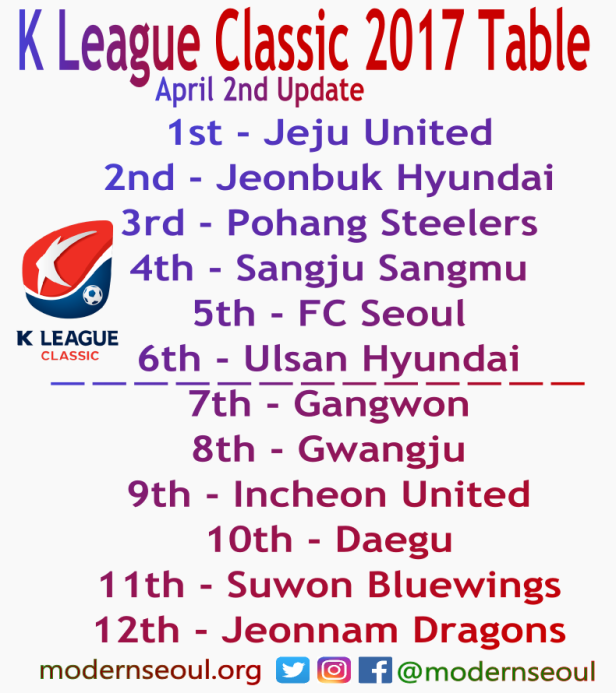 Of course following just 4 games the league table doesn’t reflect a probable final table, but it does make of nice viewing for a few sides. Jeju lead the way along with Jeonbuk level on 10 points. Pohang, Sangju and Seoul then all follow on 7 points. Ulsan complete the top half with 6 points. Gangwon down to Suwon Bluewings are all separated by a single point. Finally Jeonnam are bottom and still currently pointless. 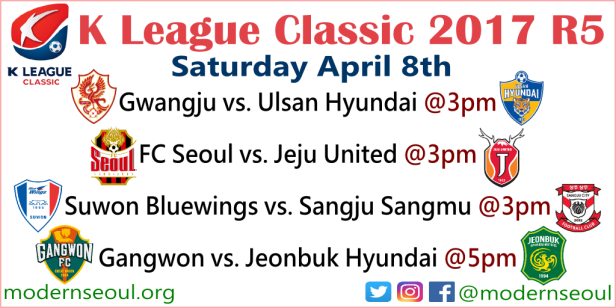 Moving onto the football, here are our brief previews and predictions for this Saturdays 4 games;

Our first game of the day comes from the Guus Hiddink Stadium home of Gwangju, as they host Ulsan Hyundai. Gwangju have picked up 4 points from 4 games, including a win over Daegu and a draw on the road last weekend against leaders Jeju United. Ulsan Hyundai picked up their second win of the season last weekend, leaving it late to beat Gangwon at home. Last Time: They drew 1-1 at the end of last August.
Prediction: 1 – 2
Ulsan should have the edge, however with an eye on the upcoming ACL game they may field a weaken side.

The second 3 o’clock kick off comes from the Seoul World Cup Stadium as FC Seoul host Jeju United. FC Seoul lost for the first time this season last weekend against rivals Jeonbuk 1-0. Prior to that defeat they’d gained 7 points. Jeju United are still undefeated this season, winning 3 and drawing 1 (last weekend vs. Gwangju). Last Time: FC Seoul won 2-0 at the end of October last year.
Prediction: 1 – 1
Evenly matched on paper and both preparing for upcoming ACL games, we see it ending in a draw.

The final 3 o’clock kick off on Saturday comes from the Suwon “Big Bird” World Cup Stadium as Suwon Bluewings host Army side Sangju Sangmu. Suwon have started to become draw specialists drawing 3 of their 4 games so far this season. Last weekend they let a 2 goal lead slip to draw against Incheon United. Sangju Sangmu have won twice away but drawn and lost at home so far this season. Which shows they’re maybe better on the road. Last Time: It ended 1-1.
Prediction: 0 – 1
Sangju could be slight favorites based on recent form, and because of Suwon’s upcoming ACL match.

Our highlight game of the day comes from the Alpensia Ski Jumping Stadium home of Gangwon, as they take on Asian Champions Jeonbuk Hyundai. Gangwon haven’t had a great return to the Classic, winning their opening game but only picking up a single point since then. Jeonbuk Hyundai on the other hand are joint top of the table with 3 wins and a draw from their opening 4 games. Including a win over FC Seoul last weekend. Last Time: Jeonbuk won 4-1 back in August 2013.
Prediction: 1 – 2
Jeonbuk will start as favorites, but we don’t see them winning be a large margin.
+Game of Day+ This is our highlight game of the day and therefore we’ll be covering it in extra detail via our Twitter Page. 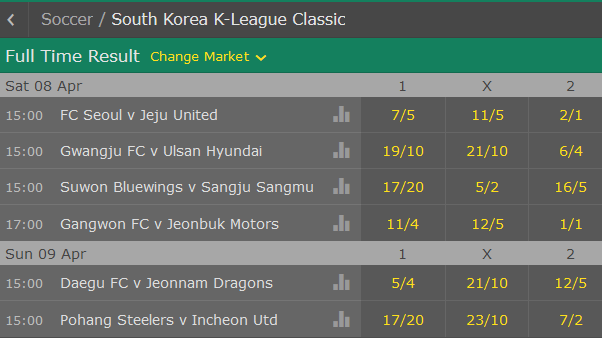 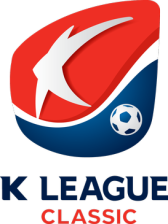 Saturday afternoon and evening also features three games in the K League Challenge. The standout game on Saturday is between Daejeon Citizen and Asan Mugunghwa. 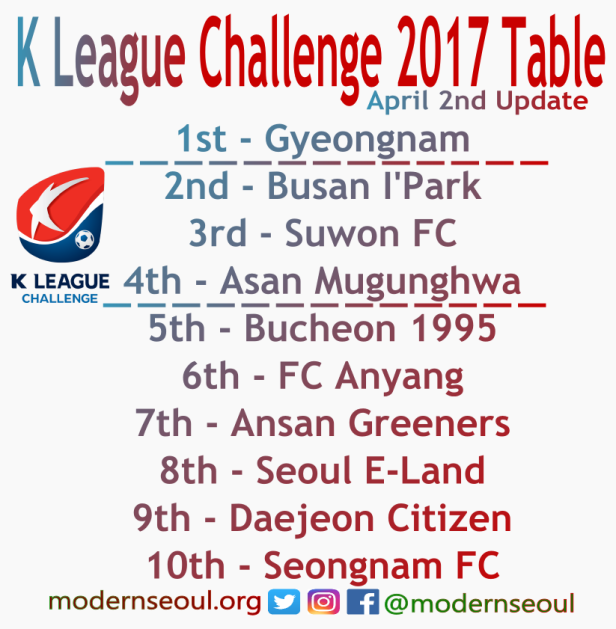 The league table after just four games has Gyeongnam topping the table, followed by Busan I’Park, Suwon FC and Asan Mugunghwa who currently fill the playoff places. Bucheon 1995 and FC Anyang follow close behind. Ansan Greeners, Seoul E-Land and Daejeon Citizen are already a little off the pace. Finally we have Seongnam FC who still sit at the bottom. 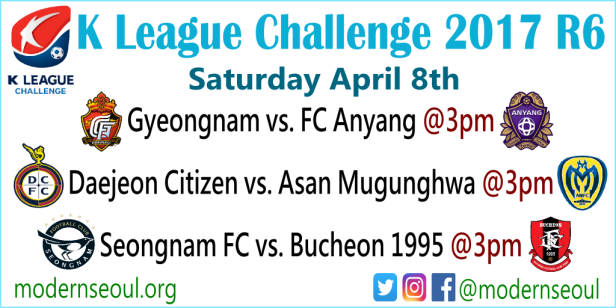 The first game in the Challenge this Saturday features league leaders Gyeongnam taking on an improving FC Anyang. Gyeongnam have won 3 and drawn 2 of their opening 5 games, including winning both of their previous home games. FC Anyang started the season slowly losing their opening 3 games, however they’ve put together back to back wins moving upto 7th.
Prediction: 2 – 1
Gyeongnam will start as favorites, however we see FC Anyang putting up more of a fight then during those early games.

The highlight game of the day comes from the Daejeon World Cup Stadium, where Daejeon Citizen take on Asan Mugunghwa. Daejeon have had a poor start to the season with only one win from their opening 5, they’ve also lost their last 2. Asan Mugunghwa saw their 3 gaming running run come to an end last weekend as the hand of Busan I’Park.
Prediction: 2 – 2
We see this ending in an entertaining draw, with possible goals a plenty.
+Game of Day+ This is our highlight game of the day and therefore we’ll be covering it in extra detail via our Twitter Page.

This Saturdays last game features bottom side Seongnam FC and 5th placed Bucheon 1995. Seongnam FC have only managed 2 draws from their opening 5 games, including a dire 0-0 draw last weekend against Seoul E-Land. Bucheon 1995 have 3 wins from 5, and were impress beating Ansan Greeners last weekend 4-2.
Prediction: 0 – 1
We’ve not seen any reason yet this season to side with Seongnam, but maybe this will be the turning point. 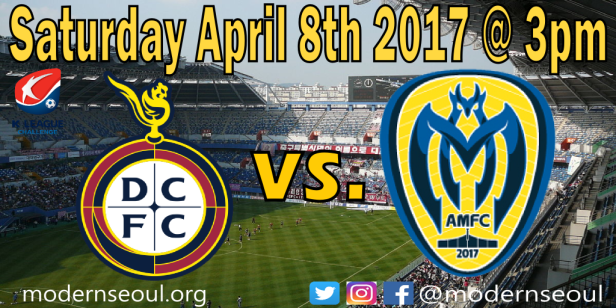