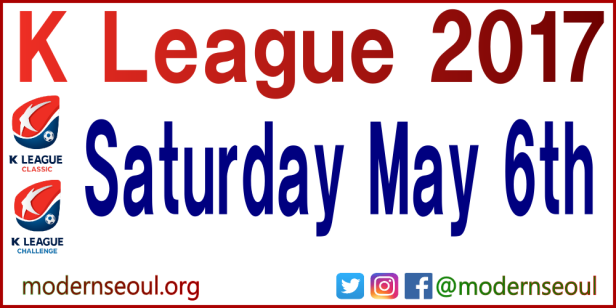 It’s a quick turnaround from Wednesday’s 9th round of the 2017 K League Season to this weekends 10th. Due to Champions League action next week there are 4 games on Saturday afternoon, with more of a focus on the top of the table and Championship. The featured game is between in-form Suwon Bluewings and inconsistent Ulsan Hyundai.

+ For details on Sundays Action (May 7th) – Please Click Here +

After 9 games the league table has started to take shape. Jeju United returned to the top during the week, level on points with Jeonbuk Hyundai. 3rd placed FC Seoul down to 7th placed Pohang Steelers are separated by only 2 points. Gwangju, Jeonnam, Gangwon and Daegu are a little off the pace now in 8th-11th. Incheon United despite winning during the week are 3 points adrift at the bottom.

Moving onto the days action, here are our brief previews and predictions for this Saturdays 4 games;

The highlight game of the day is also an early kick off as Suwon Bluewings host Ulsan Hyundai. Suwon Bluewings have won 3 in a row in the league and haven’t lost since the beginning of the season. They will however have one eye on their upcoming Champions League game. Ulsan Hyundai are out of the ACL and have looked better recently in the league winning 2 straight.
Prediction:  2 – 1
Despite Ulsan’s recent improvements, we feel Suwon at home will the stronger side.
+Game of Day+ This is our highlight game of the day and therefore we’ll be covering it in extra detail via our Twitter Page.

The 1st of the 3 o’clock Saturday kick offs comes from the Steelyard, as Pohang host Seoul. Pohang Steelers have looked poor in recent weeks losing 3 games on the bounce in the league and once in the cup. FC Seoul have been OK but not overly impressive.
Prediction:  0 – 1
Neither side is in-form at the moment but Seoul have been the better of the two.

The other Saturday 3 o’clock kick off comes from the Jeju World Cup Stadium and sees league leaders Jeju United hosting 5th placed Sangju Sangmu. Jeju United can score for fun this season and this was proved on Wednesday as they hammered Jeonbuk 4-0. Sangju Sangmu on the other hand looked tired and fell to bottom side Incheon United.
Prediction:  3 – 1
League leaders Jeju will be firm favorites to pickup the 3 points.

The late Saturday game comes from Daegu and features sides at opposite ends of the K League Classic table. Daegu sit down in 11th place and have lost 3 of their last 4 games. However they’re undefeated at home this season. They host 2nd placed Jeonbuk Hyundai who’ve slumped in the past week losing twice including a 4-0 hammering on Wednesday afternoon.
Prediction:  1 – 1
Jeonbuk maybe favorites to win this one, however Daegu are strong at home so we’re favoring a draw.

Ulsan and Jeonbuk claimed credible away win on Saturday afternoon. Pohang came from 2 games behind to pick up an impressive 3 points. Finally Jeju United eased to a 4-1 win, showing you can show goals for fun in the K League.

Saturday afternoon also features three interesting games in the K League Challenge. The standout game on Saturday for us is between Ansan Greeners and Asan Mugunghwa (who previous played in Ansan). We also have a 2nd vs. 4th clash between Busan I’Park and Bucheon 1995.

+ For details on Sundays Action (May 6th) – Please Click Here + 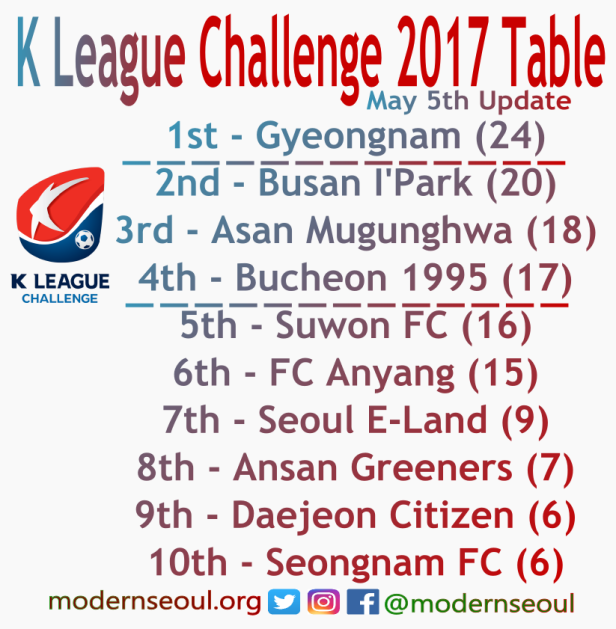 The league table after ten games has Gyeongnam topping the table 4 points clear, followed by Busan I’Park, Asan Mugunghwa and Bucheon 1995 who currently fill the playoff places. Suwon FC and FC Anyang follow close behind. Then we have a 6 point gap to Seoul E-Land, Ansan Greeners, Daejeon Citizen and finally we have Seongnam FC who have returned to the bottom.

The first of Saturdays games features two playoff placed sides Busan I’Park and Bucheon 1995. Busan lost for only the second time this season during the week to league leaders Gyeongnam. Bucheon 1995 labored to a 2-0 win over a poor Ansan Greeners.
Prediction: 1 – 1
Close game on paper and one that could go either way and therefore we’re siding with a draw.

In our featured Challenge game comes from the Ansan Wa Stadium a is a derby of sorts, as Mugunghwa called Ansan home until the end of last season. Ansan Greeners have lost 4 game straight and look defensively weak. Asan Mugunghwa are unbeaten in 5 games and currently in the playoff places.
Prediction: 0 – 2
As this is a derby it’s a little tricky to call, but based on reason form we’re siding with an Asan win.
+Game of Day+ This is our highlight game of the day and therefore we’ll be covering it in extra detail via our Twitter Page

The late Saturday game comes from the Seoul Olympic Stadium where Seoul E-Land host FC Anyang. Seoul E-Land picked up a moral boosting win during the week pushing them up into 7th. FC Anyang have won 3 from 4 and are showing possible playoff form.
Prediction: 1 – 2
E-Land might not be the best technical side but they grind out results, so this will be close. But we see Anyang winning.

Ansan were the only side to turn the form-book on Saturday afternoon, as they and Busan both won. Seoul and Anyang also drew, leaving them in stuck in mid-table. 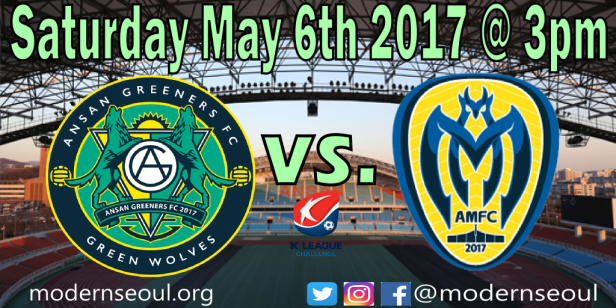