This week sees the final round of games in the Asian Champions League Group Stages. Tuesday evening features the only K League sides who can still progress to the knockout round. Suwon Bluewings travel to China to take on Gunagzhou, whilst Jeju United host J-League side Gamba Osaka.

Guangzhou Evergrande top the group with 9 points from 5 games, Suwon Bluewings a place and a point behind them. Kawasaki Frontale are in 3rd on 7 points and finally Eastern SC are already out of the competition.

Jiangsu Suning lead the way and have already qualified. Gamba Osaka are currently bottom but could progress if they comfortably beat Jeju. Adelaide require a win and hope that Jeju don’t win. Jeju need a win or only a draw if Adelaide fail to win. 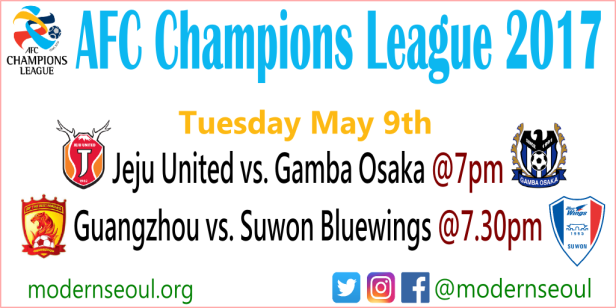 The first game of the evening comes from China, as big spending Guangzhou Evergrande host Suwon Bluewings. Guangzhou are unbeaten in the competition so far and sit at the top of the group. However the Chinese Super League leaders haven’t qualified yet. 6th placed K League Classic side Suwon have had a solid group stage campaign drawing twice and winning twice (but against Eastern SC), but lost a couple of weeks ago to Kawasaki. They looked slow at the weekend, but that was maybe to save energy for this game.

Head-to-Head / H2H:
They’ve played twice before, once in a friendly which Suwon won 2-0. And in the previous group stage game which ended 2-2.

Prediction:
1 – 1
A draw will be enough for Guangzhou and if they score early they’ll shut up shop. Sadly a draw might not be enough for Suwon, unless Eastern SC spring a surprise in their game.

The second game comes from Jeju Island, as Jeju United host Gamba Osaka. K League leaders Jeju have had a solid return to Champions League football winning 2, drawing 1 and losing 2. However their home form has been an issue losing both previous group games. Gamba Osaka only have 4 points from 5 games and haven’t looked confident so far during the competition. They are however 3rd in the J-League and won’t just roll over.

Head-to-Head / H2H:
They played each other three times over the years all in the champions leagues. Jeju winning twice and Gamba once.

Prediction:
2 – 1
We see Jeju winning this game if they are able to bring in their recent K League form.

A back and forth game in China resulted in a draw and meant Guangzhou progressed and Suwon crashed out.

Jeju United won on a rainy evening to progress to the final 16 for the first time.