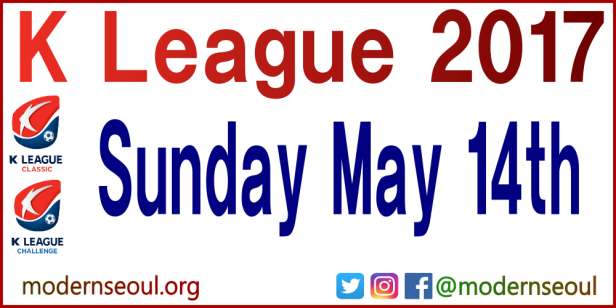 Sunday in the K League Classic features all 4 sides from the AFC Champions League, with 3 of the 4 looking to kick-start their seasons after disappointing ACL campaigns. The standout games are the clashes between Sangju Sangmu & FC Seoul as well as the Hyundai derby between Ulsan & Jeonbuk.

+ For details on Saturdays Action (May 13th) – Please Click Here +

Jeju United and Jeonbuk Hyundai lead the way after 10 games. Ulsan 3rd down to Gangwon 9th are separated by only 5 points. Finally Gwangju, Daegu and Incheon United are still a little off the pace.

note this doesn’t include Saturdays results.

Moving onto the days action, here are our brief previews and predictions for this Sundays 4 games;

The first game of the day is also our highlight game as Sangju Sangmu host FC Seoul. Sangju Sangmu have hit a rocky patch losing their last two games and dropping into the bottom half. FC Seoul have also been a little off, winning 2 and drawing 2 of their last 4 league games. However a weaken Seoul beat Urawa Reds in the ACL during the week.
Prediction:  1 – 2
This could be a very interesting game, one that we see Seoul edging.
+Game of Day+ This is our highlight game of the day and therefore we’ll be covering it in extra detail via our Twitter Page.

The next game is the 55th Hyundai Derby between Ulsan Hyundai and Jeonnam Hyundai. Ulsan have recently found some league form winning 3 games straight, and they also won during the week against Brisbane in the ACL. Jeonbuk Hyundai won for the first time in 3 games last weekend beating Daegu and are level on points with leaders Jeju United.
Prediction:  1 – 1
This derby match is always a close one, and therefore we’re siding with a draw.

The third and final 3 o’clock kick off comes from the Steelyard as Pohang Steelers host league leaders Jeju United. Pohang Steelers ended a losing run of 3 games by beating FC Seoul despite being 2 goals down. Leaders Jeju United are also the only K League side to progress from the ACL group stages. They’ve scored 8 goals in their last 2 league games beating Jeonbuk and Sangju.
Prediction:  1 – 2
Jeju have been the most impressive side so far this season, it might not be an easy win but we do see them taking the 3 points.

The final Sunday afternoon game is between two mid-table sides as Jeonnam Dragons host Suwon Bluewings. Jeonnam have won 4 from 5 and smashed Gwangju last weekend 5-0. Suwon Bluewings were on a 3 game winning run, but lost to in-form Ulsan last Saturday.
Prediction:  2 – 1
Due to Suwon’s ACL exploits we feel they maybe a little tired and therefore we’re edging toward a Jeonnam victory.

+ For details on Saturdays Action (May 13th) – Please Click Here + 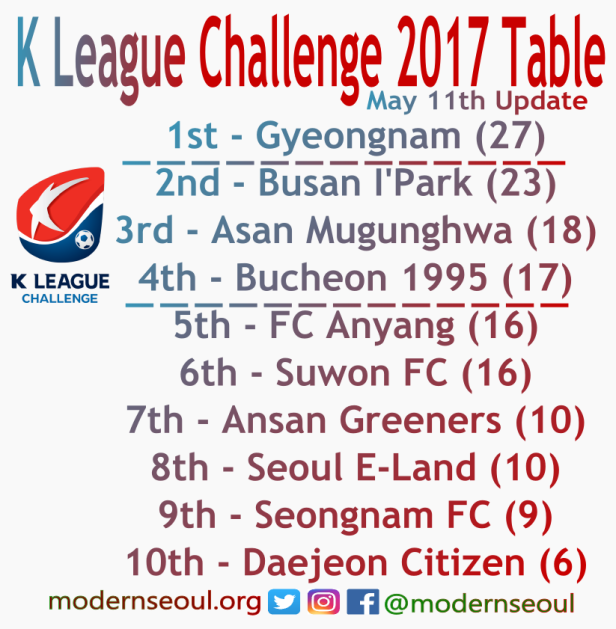 The league table after ten games has Gyeongnam topping the table 4 points clear, followed by Busan I’Park, Asan Mugunghwa and Bucheon 1995 who currently fill the playoff places. Suwon FC and FC Anyang follow close behind. Then we have a 6 point gap to Seoul E-Land, Ansan Greeners, Seongnam FC and finally we have Daejeon Citizen who are bottom.

note this doesn’t include Saturdays results.

Prediction: 1 – 1
Two sides that seem evenly matched and cannot really afford to drop points to each other. So we’re siding with a draw.

Prediction: 2 – 1
Bucheon maybe on inconsistent form, but Daejeon have lost 4 on the bounce and therefore Bucheon seem favorites for the win.
+Game of Day+ This is our highlight game of the day and therefore we’ll be covering it in extra detail via our Twitter Page 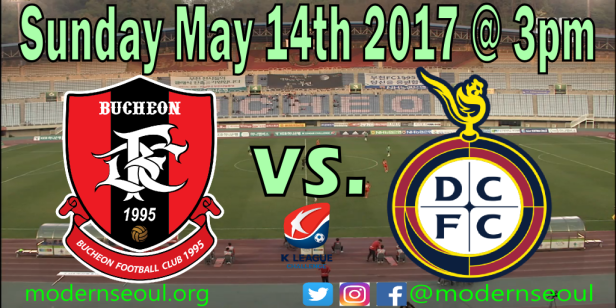