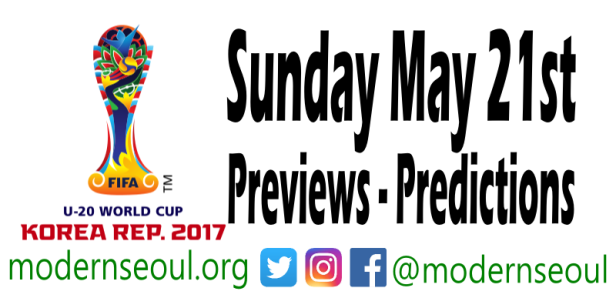 The highlight game of the day is either the battle between African Champions Zambia and Portugal, or the classic match between Uruguay and Italy. Here are previews and predictions are all 4 games;

Are the details on the 4 games on Sunday in the U20 World Cup;

The first game of the day features African Champions Zambia and European giants Portugal. Zambia come into the tournament as a powerful African side, but Portugal were 3rd best in Europe, and on paper have the better squad.

Close game, but Portugal should have the edge.

Narrow game, both sides could benefit from a draw.

The first game in Group D features South Africa and Japan. South Africa were the 4th and final side to progress to the finals, their 3rd appearance. Japan on the other hand are the current Asian Champions and are expected to do well in this tournament.

A healthy crowd is expected in Suwon on Sunday, and we see a win for Japan.

The final game of the day is between classic rivals Uruguay and Italy. Uruguay are the current South American Champions, but face Italy European championship runners-up and one of the favorites.

Tough game to call as it’s between two famously unpredictable sides. But we’re siding with Italy, mainly due to their love/hate relationship with Korea (aka 2012 WC)