This week the Champions League moves into the Round of 16, and Jeju United are the only K League side still in the competition. They take on J-League side Urawa Reds, and the 1st leg takes place at the rarely used Jeju City Stadium as the World Cup Stadium is being used for the U20 World Cup. Kick off is also at 3pm as the stadiums floodlights aren’t in strong working order.

Here are our brief preview for Jeju United v Urawa Reds as well as head-to-head (H2H) records and predictions; 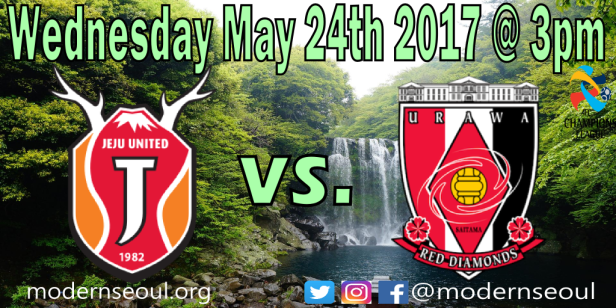 On Wednesday afternoon Jeju United take on Urawa Reds in the 1st leg of the Round of 16 stages of the 2017 AFC Champions League. K League leaders Jeju United have enjoyed a strong return to Champions League action this year finishing 2nd in their group only behind Jiangsu Suning. J-League side Urawa Reds topped the group of death ahead of Guangzhou Evergrande, FC Seoul and Western Sydney Wanderers. They are currently 3rd in the J-League. Interesting game on paper, which could be a little slow due to the heat of the afternoon sun.

Head-to-Head / H2H:
They’ve never played either other before.

Prediction:
1 – 1
A draw seems like the likely outcome from this 1st leg game.