Despite the U20 World Cup continuing this weekend, the K League doesn’t stop and Saturday even features 3 games in the Classic. This is the final weekend before a 2 week break for International Fixtures and the U20 World Cup Final. The standout game is between Jeonbuk Hyundai and Suwon Bluewings, an important top half clash.

+ For details on Sundays Action (May 28th) – Please Click Here +

Jeju United lead the way but are only a single point clear at the top over Jeonbuk and Pohang. 10 points separate 4th to 10th, whilst Daegu and Incheon United are at the bottom and need to improve. 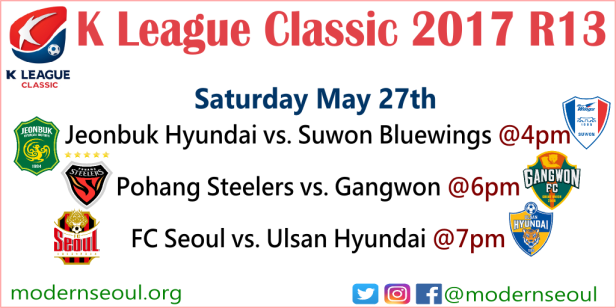 The first game of the day is between two K League giants, Jeonbuk Hyundai and Suwon Bluewings. Jeonbuk have drawn twice in recent weeks, with only 1 win in 5. Suwon Bluewings on the other hand have won 4 in 5.
Prediction:  2 – 1
Close game, that we see ending in a draw.

The 2nd game of the day features two of the leagues in form sides as Pohang Steelers host Gangwon. Both sides are on 3 game winning runs. Also Pohang had only drawn once all season.
Prediction:  2 – 1
Despite both sides being in-form, we feel Pohang at home will have the edge.

The the final game on Saturday comes from the Seoul World Cup Stadium and is between FC Seoul and Ulsan Hyundai. Both sides had disappointing ACL campaigns and will now be focusing on the league. FC Seoul have only won once in 5 games, whilst Ulsan have won 4 from 5.
Prediction:  1 – 2
Tight game on paper, but form wise one Ulsan could edge.

Saturday afternoon also features a single game (Anyang v Gyeongnam) in the K League Challenge. This will be lost a little under the Classic and U20 World Cup.

+ For details on Sundays Action (May 28th) – Please Click Here + 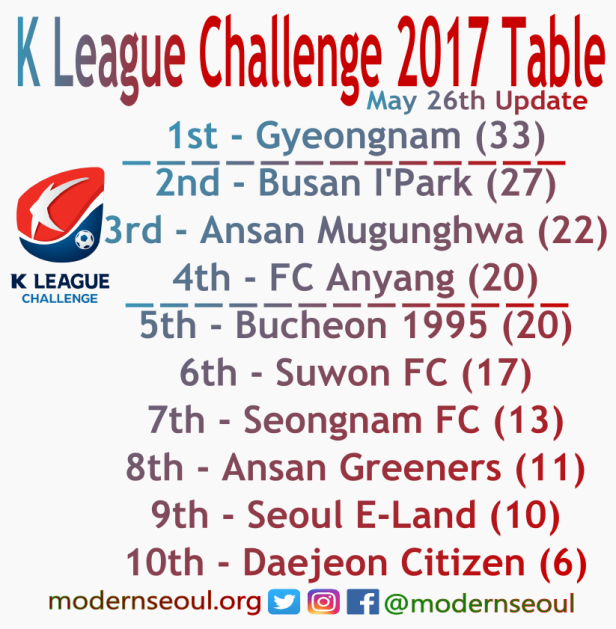 The league table after 13 games has Gyeongnam topping the table 6 points clear, followed by Busan I’Park, Asan Mugunghwa and FC Anyang who currently fill the playoff places. Bucheon and Suwon are close behind. Then there’s a gap to Seongnam, Ansan, Seoul and finally Daejeon.

Prediction: 1 – 2
League leaders Gyeongnam are the in-form side and although it will be close we see them edging this one.