The K League Classic returns this weekend following a tough international break for the national team. It will be interesting to see how sides have done during the break and if they’ve improved. The highlight games this Saturday is the Jeolla Derby between Jeonnam and Jeonbuk as well as the South East derby between Pohang and Ulsan.

Jeonbuk Hyundai currently top the table 2 points ahead of Jeju United. Pohang, Ulsan, Gangwon and Suwon complete the top half and are separated by only 2 points. FC Seoul, Sangju Sangmu and Jeonnam are the best of the rest. Gwangju, Daegu and finally Incheon United complete the table. 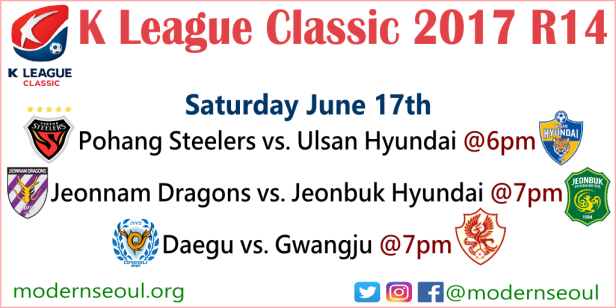 The first game of the day is a local derby between South East rivals Pohang Steelers and Ulsan Hyundai. Pohang Steelers have been solid this season but sometimes drop late goals. Ulsan Hyundai are also in the top half, they are difficult to beat but struggle to score goals in the league.
Prediction:  1 – 1
Evenly matched sides, with a draw the likely outcome.

The second game of the day is the Jeolla Derby between Jeonnam Dragons and league leaders Jeonbuk Hyundai. Jeonnam were inconsistent before the international break, but can score goal for fun. Leaders Jeonbuk Hyundai have the best defence in the league and will come into this game as favorites.
Prediction:  1 – 2
We see Jeonbuk edging this one.

The the final game on Saturday is between two of the league bottom sides Daegu and Gwangju. Daegu have a strong home record and are expecting a slightly increased attendance for this game. Gwangju have only taken 2 points from away games so far this season and have only won twice all season.
Prediction:  2 – 0
Daegu will start the game as favorites to win on paper at least.

The league table at this point has Gyeongnam topping the table 8 points clear, followed by Busan I’Park, Asan Mugunghwa and Bucheon 1995 who currently fill the playoff places. Anyang, Seongnam and Suwon are close behind. Then there’s a gap to Ansan, Seoul and finally Daejeon.

Prediction: 2 – 2
Daejeon won for only the second time last weekend, but Ansan held league leaders Gyeongnam. So we see an entertaining draw.

Prediction: 1 – 0
We see Suwon FC picking up their first win since April in this one. 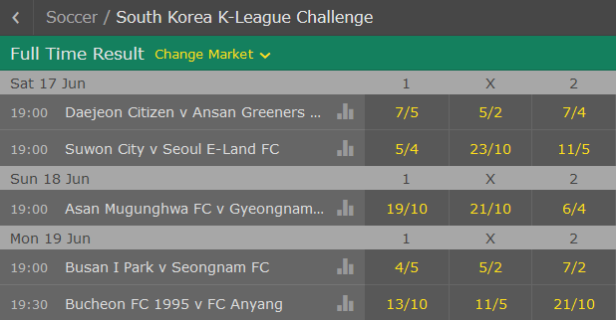