The K League Classic moves into Sunday and it’s headlined by the “Super Match” between Suwon Bluewings and FC Seoul. The Super Match is one of the highlight games of the season, and with both sides struggling in mid-table a win is much needed by both sides. Gangwon also take on Jeju and Incheon host Sangju a little later in the evening. 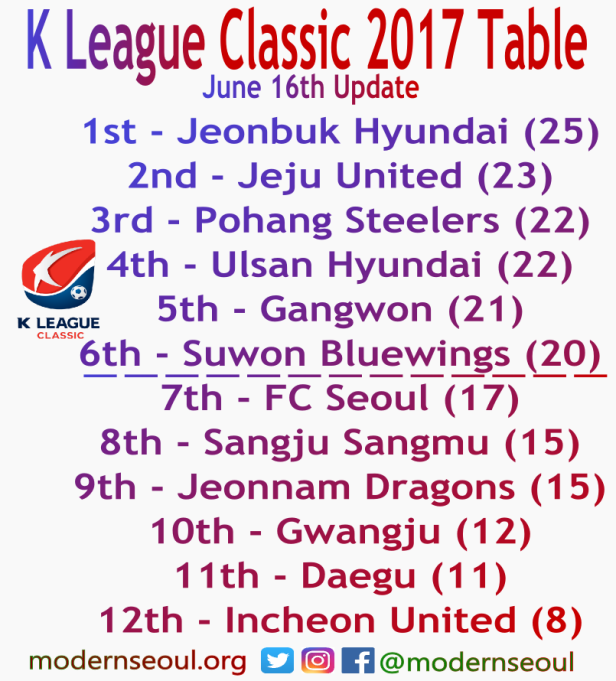 Jeonbuk Hyundai currently top the table 2 points ahead of Jeju United. Pohang, Ulsan, Gangwon and Suwon complete the top half and are separated by only 2 points. FC Seoul, Sangju Sangmu and Jeonnam are the best of the rest. Gwangju, Daegu and finally Incheon United complete the table.

The first game of the day is the Super Match between Suwon Bluewings and FC Seoul. Suwon Bluewings are currently sitting in 6th having recovered from a poor start to the season. Before the international break they’d won 3 from 5. 7th placed FC Seoul have lost their early season form, and recently have gone on a 4 game winless run.
Prediction:  1 – 0
The Super Match is always well attended a played at a strong pace. We see Suwon coming out on top.

The second game of the day is between Gangwon and 2nd placed Jeju United. Gangwon have looked solid since returning to the Classic this season, and are currently on a 4 game winning run. However Jeju United are a strong side who can score for fun. They’ve won 3 from 4 coming into this game.
Prediction:  1 – 2
Although a draw seems the likely outcome, we’re siding with a surprise away win for Jeju.

The the final game on Sunday is a bottom of the half clash between two of the leagues out-of-form sides Incheon United and Sangju Sangmu. Incheon United have picked up just one win all season (which was against Sangju), and are 3 points adrift at the bottom. Despite a strong start to the season Sangju Sangmu have fallen like a brick recently gaining just 1 point from their last 5 games.
Prediction:  2 – 2
Both sides will have benefited from the break, but we see this ending in an entertaining draw. 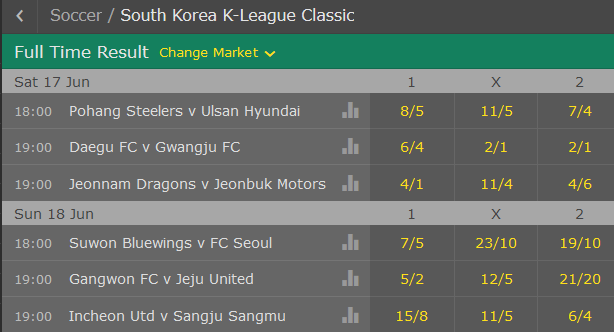 Sunday afternoon also contains action for the K League Challenge, however only 1 game. The final 2 take place on Monday evening.

The league table at this point has Gyeongnam topping the table 8 points clear, followed by Busan I’Park, Asan Mugunghwa and Bucheon 1995 who currently fill the playoff places. Anyang, Seongnam and Suwon are close behind. Then there’s a gap to Ansan, Seoul and finally Daejeon.

Prediction: 1 – 3
Gyeongnam will have learnt a lesson from last weeks surprise 3-3 draw with Ansan and will have enough to win in Asan.

Prediction: 1 – 1
Evenly matched sides, Busan maybe have the home advantage but we see this ending in a draw.

Prediction: 2 – 1
4th vs. 5th and Bucheon tend not to draw. Therefore we’re siding with a slightly risky Bucheon victory.