We are a rare midweek round in the K League Classic on Wednesday evening, with all 12 sides in action. Ulsan Hyundai vs. Jeju United is maybe the pick of the games with both sides currently in the championship race.

Jeonbuk Hyundai currently top the table 3 points ahead of Ulsan Hyundai who moved up to 2nd at the weekend, Gangwon are now 3rd with Jeju, Pohang, Seoul and Suwon close behind. 2nd-7th are separated by just 5 points. Than there’s a gap to Sangju, Jeonnam, Daegu and Gwangju. Then we finally have Incheon United 3 points adrift at the bottom. 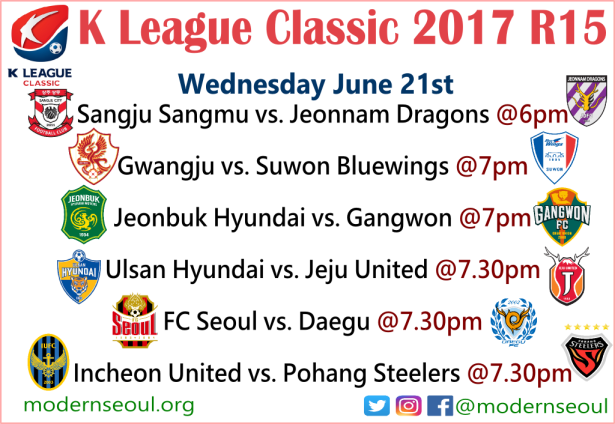 Moving onto the days action, here are our brief previews and predictions for this Wednesdays 6 games;

The first game of the day is between 7th placed Sangju Sangmu and 8th placed Jeonnam Dragons. Two sides separated by just a single point. Sangju claimed a last minute point against bottom side Incheon United on Sunday evening. Whilst Jeonnam Dragons were easily beaten in the Jeolla Derby at home to League Leaders Jeonbuk Hyundai.
Prediction:  1 – 1
Evenly matched sides, with a draw the likely outcome.

The second game of the day is an interesting game between two sides looking to break out of poor runs of form. Gwangju host Suwon Bluewings. Gwangju played out an entertaining 2-2 draw with Daegu at the weekend, whilst Suwon lost in the Super Match 2-1 to FC Seoul.
Prediction:  0 – 1
We see a narrow away win for Suwon.

A big game for Jeonbuk Hyundai who return to the Jeonju World Cup Stadium for the first time this season taking on Gangwon. League leaders Jeonbuk eased past Jeonnam in the Jeolla Derby at the weekend 3-0, whilst Gangwon beat Jeju at home 2-1. So both sides will come into this game confident.
Prediction:  2 – 0
We see Jeonbuk coming out of top here, as Gangwon are weaker away from home.

Maybe the highlight game of the day and the first of three 7.30 kick offs, Ulsan Hyundai vs. Jeju United. Ulsan Hyundai beat local rivals Pohang at the weekends thanks to a late winner, and have moved ahead of Jeju United. Jeju fell on the road to an ever improving Gangwon 2-1, in front of just 1365.
Prediction:  2 – 1
We see Ulsan winning this one based on the weekends performances. But Jeju could spring a surprise.

The 5th games of the day comes from the Seoul World Cup Stadium. As FC Seoul host Daegu. FC Seoul will be big favorites to win this one following their Super Match victory at the weekend. Daegu are currently 10th and despite having a poor start to the season, did beat Seoul in the reverse fixture.
Prediction:  2 – 0
Seoul will be disappointed with anything less than a win.

The the final game of the evening comes from Incheon, as Incheon United take on Pohang Steelers. Bottom side Incheon were unlucky to concede in the 95th minute at the weekend dropping points to Sangju. Pohang also suffered late heartbreak, losing in a South East derby to Ulsan Hyundai.
Prediction:  1 – 1
Could be a cagey game with both sides looking to tighten at the back. Therefore a draw seems the likely outcome.

The K League Challenge returns at the weekend.