Sunday in the K League Classic this weekend features home games for the leagues big 3; Suwon Bluewings, FC Seoul and Jeonbuk Hyundai. Suwon v Gangwon is maybe the standout game as both sides are pushing to be in championship contention. Previews and Predictions below;

Jeonbuk Hyundai currently top the table 3 points ahead of Ulsan Hyundai, who in turn are 3 points ahead of Pohang Steelers who are now 3rd. Gangwon, Jeju, Suwon and Seoul a split by only 3 points. Then there is a 4 point gap down to Sangju in 8th and Jeonnam 9th. Daegu, Gwangju and Incheon United complete the table and all 3 look destined for the relegation battle this season.

The first game on Sunday evening in between 2 inform sides Suwon Bluewings and Gangwon. Suwon Bluewings have won 3 from 5 only losing to Jeonbuk and Seoul. Gangwon crashed to a 4-1 defeat to Jeonbuk during the week, snapping a 5 game winning run.
Prediction:  1 – 1
Suwon have been weak at home this season, so we see these sides playing out a tight draw.

The second game of the day is a mid-table clash between FC Seoul and Sangju Sangmu. FC Seoul are a hard side to beat, but have found scoring difficult so far this season. Sangju Sangmu are winless in 7 games now. Sangju Sangmu haven’t beaten FC Seoul away since 2005.
Prediction:  1 – 0
We see a narrow win for the defending champs FC Seoul.

The the final game on Saturday is between two sides at opposite ends of the table, league leaders Jeonbuk Hyundai and 11th placed Daegu. Jeonbuk Hyundai have won both of the games since returning from the international break scoring 7 goals in the process. Daegu on the other hand have drawn both of their games, but are weaker away from home.
Prediction:  2 – 0
Jeonbuk should pick up the 3 points here. 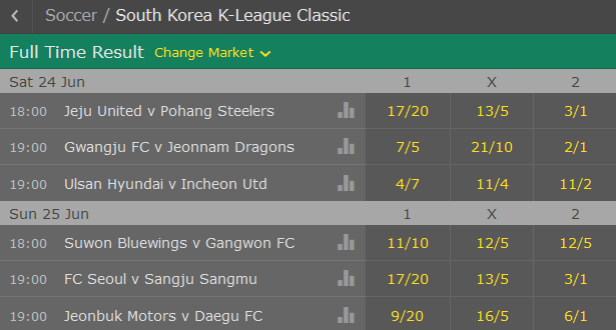 Sunday evening also features a single game in the K League Challenge. There are also two games on Monday evening.

The league table at this point has Gyeongnam topping the table 9 points clear, followed by Busan I’Park, Bucheon 1995 and Asan Mugunghwa who currently fill the playoff places. Seongnam, Anyang and Suwon are close behind. Then there’s a gap to Ansan, Seoul and finally Daejeon who are 5 points adrift.

Prediction: 1 – 0
But sides are lacking form, but we see Anyang ringing the changes and bouncing back from their hammering last Monday.

Prediction: 1 – 2
We’ve sided with Busan, however Ansan have been improving recently so it will be close.

Prediction: 1 – 1
Bottom of the table clash, must win for both but also mustn’t lose. Therefore we see a draw with maybe an injury time equalizer.