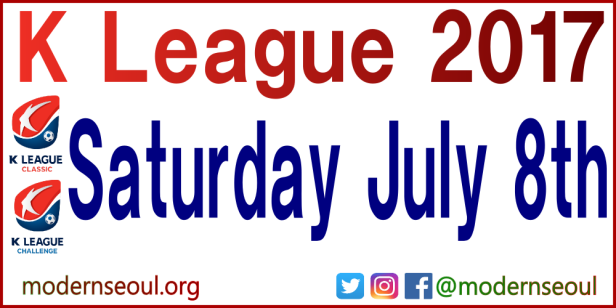 Sides have had a week to recover from last weekends monsoon weather and the forecasts are looking a little dried (but still a little rainy). The Classic moves into its 19th round of the 2017 season, with the all Hyundai Derby between Jeonbuk and Ulsan the highlight on Saturday evening. Which is also 1st vs. 2nd. Previews and Predictions for all of Saturdays games below;

Jeonbuk Hyundai currently top the table 3 points ahead of Ulsan Hyundai, who in turn are 3 points ahead of Gangwon. Jeju, Pohang and Suwon complete a very tight top half. FC Seoul, Jeonnam Dragons and Sangju Sangmu are a little behind them. Incheon United, Daegu and finally Gwangju are the 3 sides currently adrift and in the relegation battle. 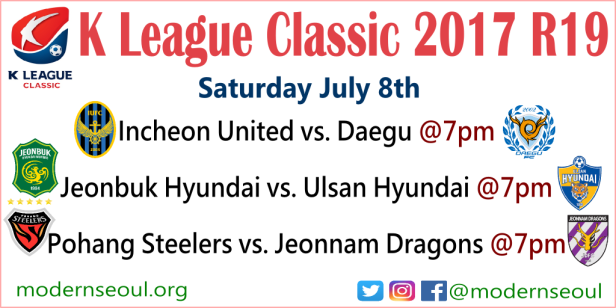 The first game of the day is between two sides deep in the relegation battle, Incheon United (10th) and Daegu (11th). Incheon United have won 2 from 3 and have only lost once in their last 5 games. This form as pushed them off the bottom for the first time in many months. Daegu have lost their last 2 games and haven’t won since May or away all-season.
Prediction:  2 – 1
Big game at the bottom and we see a narrow win for the in-form Incheon United.

The second game of the day is a big Hyundai derby which is also a 1st vs. 2nd clash, Jeonbuk Hyundai (1st) host Ulsan Hyundai (2nd). Jeonbuk lost for the first time in 2 month at the weekend thanks to an injury time Park Chu Young goal for FC Seoul. Jeonbuk do however have the best defensive record in the league at the moment. Ulsan Hyundai beat Suwon Bluewings in a game where the new VAR monster appeared for the 1st time. These sides drew in May 0-0.
Prediction:  2 – 0
Both sides are strong at the back so we see a low scoring win for Jeonbuk.

The the final game on Saturday is between comes from the Steelyard and it between Pohang Steelers and Jeonnam Dragons. Pohang have been lacking consistency lately with 2 wins and 3 defeats from their last 5 games. They’ve only drawn once all season. Jeonnam Dragons strong going forward but weak at the back, meaning that their games are always interesting. They’ve drawn 3 and won one of their last 4 games.
Prediction:  3 – 1
Despite Jeonnam being the more in-form side, we feel at home Pohang should have the edge and they have one of the leagues top scorers Yang Dong-Hyun in their squad (the other top scorer Jeonnam’s Jair).

The league table at this point has Gyeongnam topping the table 4 points clear, followed by Busan I’Park. The an 8 point gap to Asan Mugunghwa and Bucheon 1995 who currently fill the other playoff places. Suwon, Seongnam and FC Anyang are close behind. Then there’s a gap to Ansan, Seoul and finally Daejeon who are 2 points adrift.

Here are predictions for this Saturday’s K League Challenge game:

Prediction: 1 – 1
The tightest 2 defenses in the league clash on Saturday, it looks like a draw on paper at least. However Seongnam do have a few interesting new signings.