Sunday in the K League Classic has a nice fixture list of 3 games with importance at both the bottom and the top of the table. League leaders Jeonbuk on the road to Sangju Sangmu is maybe the highlight game of the day. Previews and Predictions for all of Saturdays games below; 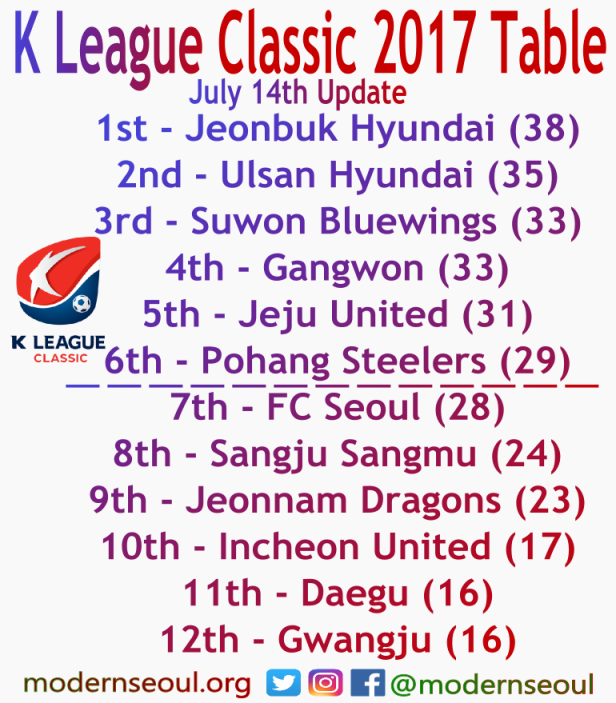 Jeonbuk Hyundai currently top the table 3 points ahead of Ulsan Hyundai, who in turn are 3 points ahead of Gangwon. Jeju, Pohang and Suwon complete a very tight top half. FC Seoul, Jeonnam Dragons and Sangju Sangmu are a little behind them. Incheon United, Daegu and finally Gwangju are the 3 sides currently adrift and in the relegation battle.

The first game of the day is between two teams having contrasting seasons. Incheon United are currently deep in the relegation battle and were hammered 3-0 on the road against Suwon during the week. However that is their only defeat in 5. Gangwon drew during the week at home to Jeonnam to extend their undefeated run to 5 games.
Prediction:  1 – 1
Incheon are solid and don’t go down without a fight, whilst Gangwon lack that edge 10% to kill games off. Therefore a draw seem the likely outcome.

The second game of the day is a key mid-table battle between Jeju United and FC Seoul. Jeju United beat league leaders Jeonbuk during the week, their first win in 4. A result that pushes them back into the championship picture. FC Seoul also won during the week beating Pohang, however they haven’t been strong on the road so far this season.
Prediction:  2 – 1
We see a narrow home win for Jeju, with maybe a late goal for Seoul.

The the final game on Saturday is between 8th placed Sangju Sangmu and league leaders Jeonbuk Hyundai. Sangju looked much improved during the week as they eased past the 10men of Daegu. Their first week in 4 games. Jeonbuk Hyundai lost on the road to Jeju United, their 2nd defeat in 4 games. That result highlighted their weakness once again this season being their away form.
Prediction:  0 – 2
Despite Jeonbuk being on paper weak away from home, we feel they should have enough to beat Sangju on Sunday.

Sunday evening features a single game whilst there are two further games for the 21st round in K League Challenge.

The league table at this point has Gyeongnam topping the table 4 points clear, followed by Busan I’Park. The an 8 point gap to Asan Mugunghwa and Bucheon 1995 who currently fill the other playoff places. Suwon, Seongnam and FC Anyang are close behind. Then there’s a gap to Ansan, Seoul and finally Daejeon who are 2 points adrift.

Here are predictions for this Sunday’s and Monday’s K League Challenge games:

Prediction: 0 – 1
Seongnam have strong at the back but weak going forward, however Ansan are weak in both areas. Therefore we see a narrow Seongnam victory on the road.

Prediction: 1 – 1
We’re going for a draw because both sides have been inconsistent this season, this could be either way.

Prediction: 1 – 3
The best form in the league Suwon will be strong favorites to beat the worst form side Seoul E-Land on Monday evening.

For information on the all of our previous K League posts: CLICK HERE