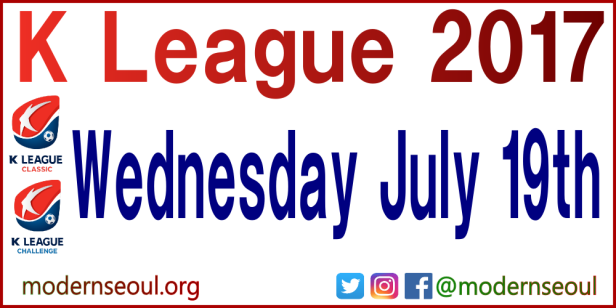 The K League action continues to roll on with the 5th round of action this month. In 12 Classic sides are in action with the standout game being the local derby between Incheon United and FC Seoul, which sadly might be watered down due to it being on a Wednesday Evening. Here are our thoughts and predictions for all 6 games;

Jeonbuk Hyundai currently top the table 3 points ahead of Ulsan Hyundai and 5 points ahead of Suwon Bluewings. Gangwon, Jeju and Seoul complete the top half. Pohang have slipped into the bottom 6, then come Jeonnam and Sangju who are both far from safe. Incheon, Daegu and finally Gwangju are separated by a 2 points at the bottom.

Moving onto the days action, here are our brief previews and predictions for this Wednesdays 6 games;

One of the two early kick offs takes place down in Sangju and is between Sangju Sangmu and Jeju United. Sangju Sangmu have only 1 win from their last 4 games and are slipping into the relegation battle. Jeju United have also struggled lately with only 1 win in 5 games, plus they didn’t always travel well.
Prediction:  0 – 1
Both sides are inconsistent and lacking form, but we’re giving Jeju the slight edge in this one.

The second game of the day is between sides at opposite ends of the table, league leaders Jeonbuk Hyundai host bottom side Gwangju. Jeonbuk Hyundai have lacked a little form recently winning 3 but losing 2 of their last 5 games. They did however easily beat Sangju at the weekend 3-1. Gwangju are bottom of the league and have only 1 win from their last 4 games. Star signing Neill McGinn played the last 20mins at the weekend and should feature again against Jeonbuk.
Prediction:  2 – 0
Of course Jeonbuk will be clear favorites to win this one.

The first of the 7.30 kick offs sees Gangwon taking on Ulsan Hyundai. Gangwon have had an impressive first season back in the Classic and are flying high up in 4th place, they’ve picked up 9 points from their last 5 games. Ulsan Hyundai have also had a strong league season so far and are currently 2nd. They’ve won 3 of their last 4 games.
Prediction:  1 – 1
We see a very tight game with a draw sadly being the most likely outcome.

Game number 4 of the evening comes from Daegu, and sees Daegu taking on Pohang Steelers. Daegu have lost 4 of their last 5 games, including a 4-3 defeat to Jeonnam at the weekend. Pohang have also been lacking form recently losing their last 2 games and only winning once in their past 5 games.
Prediction:  1 – 2
Based on recent performances we’re siding with a narrow win for Pohang, however it will be a close game.

The 5th game of the day is the always exciting Gyeongin Derby between Incheon United and FC Seoul. Incheon United have struggled this season and are currently down in 10th place, they picked up a point against high-flying Gangwon at the weekend. But they only have 1 win in 5. FC Seoul are doing slightly better up in 6th place and have won 3 of their last 4 games. The first derby created talking points for poor refereeing, hopefully VAR will sort those issues.
Prediction:  1 – 1
As it’s a derby it could be a fiery one, therefore we’re siding with a draw.

The the final game of the evening comes from the Suwon “Big Bird” World Cup Stadium and features in-form Suwon Bluewings and 8th placed Jeonnam Dragons. Suwon have won 3 on the bounce and 4 games from their last 5. Top scorer Johnathan has been a key figure in their form. Jeonnam Dragons have been difficult to beat recently drawing 4 and winning 1 (at the weekend 4-3 v Daegu).
Prediction:  2 – 1
We’re siding with Suwon to continue their recent strong run of form and win this one.

The K League Challenge returns at the weekend.

For information on the all of our previous K League posts: CLICK HERE