The K League Classic has a quick turnaround from Wednesdays midweek round to this Saturday with only 3 games until the league splits in two. The standout game on Saturday sees in-form but relegation battling Incheon United hosting a Suwon side missing top goalscorer Johnathan. Previews and Predictions for all of Saturdays games below; 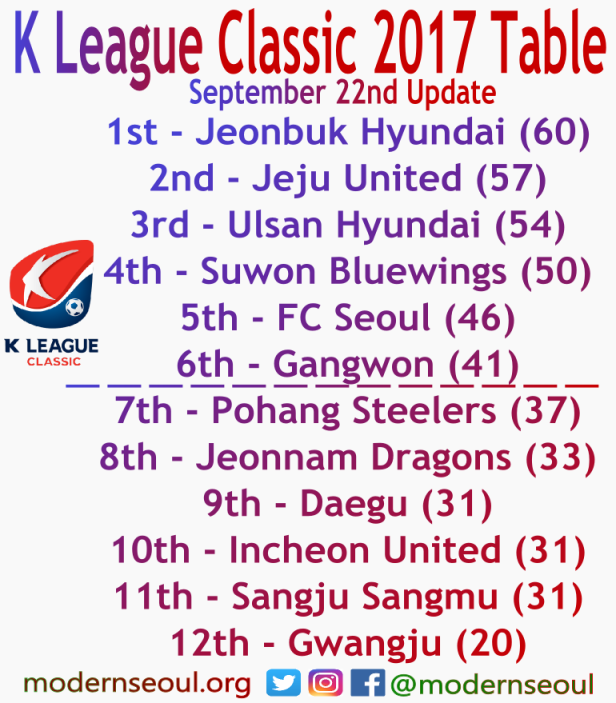 Jeonbuk Hyundai currently top the table now only 3 points ahead of Jeju United. Ulsan Hyundai are currently in the final Champions League spot. Suwon Bluewings, Seoul and Gangwon complete the top half. Pohang Steelers are 4 points behind the top 6. Jeonnam Dragons are 4 points behind them and need a miracle to finish in the top half. Daegu, Incheon United and Sangju Sangmu are all level on 31 points in a tight relegation battle. Finally Gwangju complete the table and are 9 points adrift and favorites to go down.

Moving onto the days action, here are our brief previews and predictions for this Saturdays games;

Prediction:  1 – 0
Incheon are unbeaten and haven’t conceded a goal in 6 games. Suwon are lacking form and Johnathan. Therefore a narrow Incheon win seems the likely outcome.

Prediction:  2 – 0
Ulsan are strong at home and on solid form. Whilst Jeonnam haven’t won since the start of August and are weak away from home. Ulsan will be favorites here.

Prediction:  1 – 3
Sangju Sangmu have won two on the bounce including a win over leader Jeonbuk on Wednesday. However Jeju United have won 8 and drawn 2 of their last 10 games. Even away from home we see them edging this one.

Saturday evening also features three games from the K League Challenge. There now are only 6 rounds until the end of the 2017 regular season. League leaders Gyeongnam hosting 3rd placed Bucheon looks to be the standout game.

The league table at this point has Gyeongnam topping the table now 5 points clear, followed by Busan I’Park. Then there is a 13 point gap to Bucheon 1995 and Seongnam FC who currently fill the other playoff places. Asan Mugunghwa are a little behind. Then there’s a small gap to Suwon FC, FC Anyang and Seoul E-Land who all look almost out of the playoff picture. Then we have Ansan Greeners and Daejeon Citizen who are too far away from the playoff places now.

Prediction: 0 – 2
The form might have come a little too late for Daejeon but they are playing well and we see them overcoming Suwon FC on the road.

Prediction: 4 – 2
Both side only have 1 win in 5 and poor defensive records. However we see Anyang picking up the 3 points.

Prediction: 2 – 1
Despite their recent mixed form at home Gyeongnam are stronger and Bucheon don’t travel well. Therefore we see a narrow win for Gyeongnam.