The K League Classic quickly moves towards the end of the 2017 season with only 3 rounds to go. Sunday maybe more championship with the top 2 clashing in the highlight game of the day. Jeonbuk Hyundai v Jeju United might decide the title. Previews and Predictions for all of Sundays games below;

Pohang Steelers are 8 points clear at the top of the relegation round (aka bottom 6). Daegu are 4 points ahead of the rest. Sangju, Jeonnam and Incheon are separated by a point in the battle to avoid the relegation playoff. Finally Gwangju complete the table and are 4 points adrift and still favorites to go down. 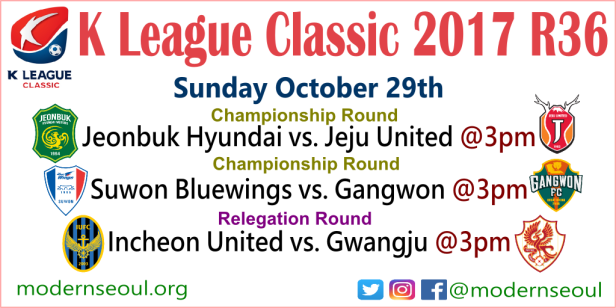 Prediction:  1 – 1
Jeonbuk are 4 points clear and a win here should secure a 3rd title in 4 seasons. However Jeju have won their last 2 and Jeonbuk sometimes struggle in the big games. So we’re siding with a draw.

Prediction:  2 – 0
Suwon crashed out of the FA Cup during the week to Challenge side Busan (VAR was involved). Moving back to the league and they’ll be favorites to beat Gangwon, as the visitors have lost their last 2 game and seem to be planning for next season in Chuncheon.

Prediction:  0 – 0
A relegation 6-pointer here. Incheon are solid at the back but lacking going forward, whilst Gwangju can score but inconsistently. Based on recent form and past results a goalless draw seems the most likely outcome.
(Full Preview via kleagueunited.com)

The league season comes to a close on Sunday afternoon in the K League Challenge, with 2 of the 3 playoff spots still open. The big game is maybe between Gyeongnam and 4th placed Seongnam. Predictions for all 5 games below;

Gyeongnam have already been confirmed champions booking their place in the 2018 K League Classic. Busan are in the playoffs. Asan Mugunghwa & Seongnam FC seem the most likely to join them, but Bucheon 1995 could still gate-crash the party. Suwon FC, FC Anyang, Seoul E-Land, Ansan Greeners and Daejeon Citizen will all be looking at next season at this point.

Here are predictions for this Sunday’s  5 K League Challenge games:

Prediction: 2 – 1
Suwon looked a little improved winning last weekend, so we see them edging Anyang who are on terrible form at the moment.

Prediction: 0 – 2
Bucheon 1995 should have the edge here, and need a win to keep their playoff dreams alive. Seoul will be out to spoil the party.

Prediction: 1 – 1
Bottom of the table end of season friendly here. 1-1 draw with both sides thankful there is no relegation down to the N-League.

Prediction: 1 – 1
Busan may rest a few players with the playoffs coming up and following their FA Cup win during the week. Still we see it being close and maybe ending in a draw.

Prediction: 0 – 1
Gyeongnam have won the league and with a few key players rumored to be leaving they might rotate the squad. This opens the door for Seongnam to pick up a surprise win and secure a playoff spot.