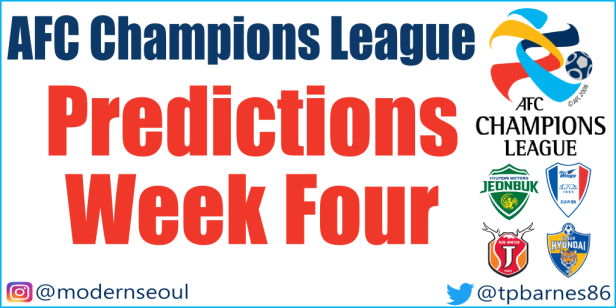 The AFC Champions League Group Stages have moved past the mid-way point and some teams could book knockout stage places this week. Week 4 is another all Korea v China / K League v Chinese Super League affair. Here are details on week 4 of the ACL2018;

Reminder that this season I’m taking a long streamlined approach to the ACL due to other commitments and therefore focuses just on Predictions, and only for games including K League sides. However I’ll take and like previews for other sites when possible.

I’ve gone for a draw in this one. They drew last week 2-2 and I can’t see any reason why the outcome will be any different on Tuesday. Ulsan lost in the league on Saturday, and will be looking to bounce back and stay in the hunt for a knockout stage spot.

I’ve given Shanghai Shenhua the narrow win in this one. Suwon looked better at the weekend beating Daegu, however I’m not sure if they can carry that form into the ACL. It will be a close game.

Based on recent results and performances I can’t side with Jeju United in this one. Jeju lost at the weekend in the K League and 5-3 last week to Guangzhou. The hosts Guangzhou also won 5-0 in the league this past Friday.

I think Jeonbuk should have the edge here at home. They might have lost at the weekend in the K League, but they rested a few star players. In the Champions League they’ve been much stronger.