Following a busy midweek round of action the K League 1 returns on Saturday with all 4 ACL teams playing. The highlight game is the Jeolla-Derby between Jeonbuk and Jeonnam. Previews and Predictions below; 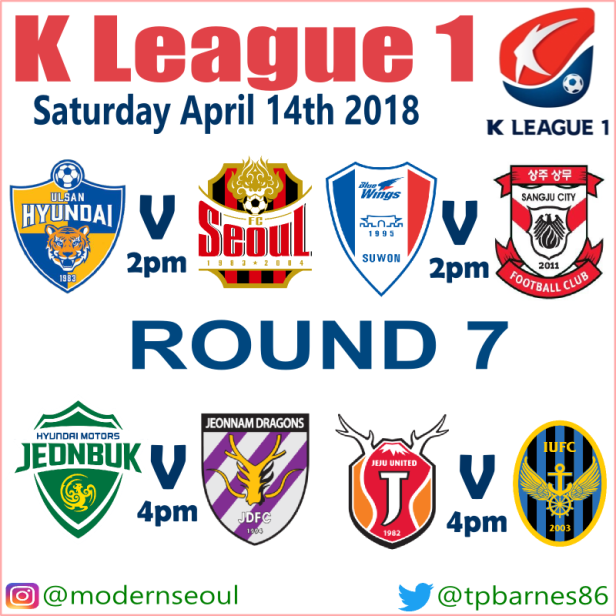 There are 4 games in the K League 1 this Saturday;

The first game of the day comes from down on the South East coast as Ulsan host Seoul. Ulsan won on Wednesday to make it back to back wins in the league and them to have finally started their 2018 K League 1 season. FC Seoul also picked up the 3 points on Wednesday evening beating Pohang Steelers in a disappointingly empty World Cup Stadium. That was their first win of the season, and moved them out of the early relegation battle spots. Overall it should be a close game, but I see Ulsan having the edge at home.

The second game of the day features Suwon Bluewings and an improving Sangju Sangmu. Suwon Bluewings came back from behind twice on Wednesday to beat Gangwon and have now won 3 and drawn 2 of their last 5. Sangju Sangmu also won on Wednesday, beating Incheon in injury time via a penalty. Overall I see Suwon having the edge over Sangju, but with a big ACL coming up for Suwon it could be a close one.

The first 4 o’clock kickoff is the always interesting Jeolla Derby between Jeonbuk Hyundai and Jeonnam Dragons. Jeonbuk Hyundai put on a masterclass during the week easily beating previous league leaders Gyeongnam, to take top spot. Their opponents Jeonnam Dragons haven’t won since the opening day of the season and were on the end of a 3-0 defeat at home to Jeju United on Wednesday. Jeonbuk will be big favorites to take the bragging rights here. But keep in mind it’s a derby and so strange things could happen.

The second late afternoon game on Saturday is between Jeju United and Incheon United. Jeju United pulled off an impressive 3-0 victory over Jeonnam on Wednesday, just their second win of the season. A win that saw them jump over Incheon in the table. Incheon lost during the week at home to Sangju in a poor game. They haven’t won since the second week of the season, but have drawn 3 times. Incheon often play well down in Jeju, and I see a predictable draw being the final result from the late game.