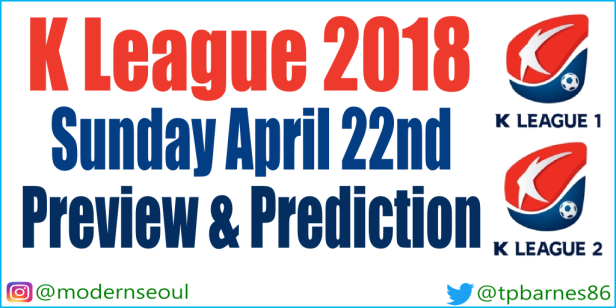 The K League continues on Sunday with the ACL clubs all in action. The highlight game on Sunday is between Jeju Untied and Jeonbuk Hyundai in a big game in the championship race.
Previews and Predictions below; 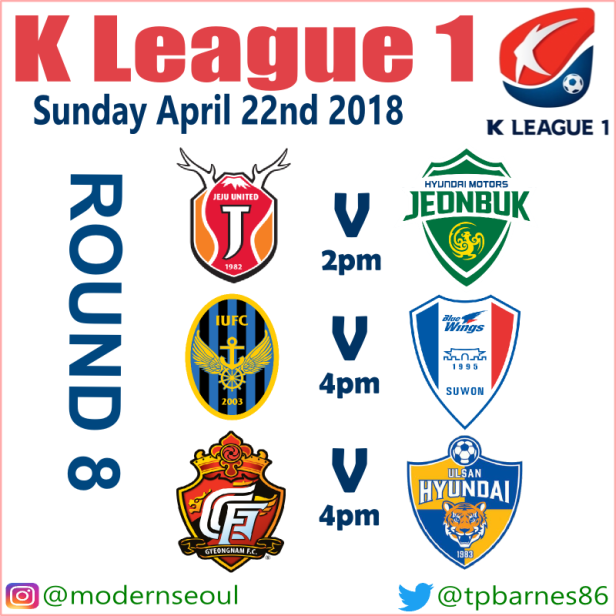 There are 3 games in the K League 1 this Sunday;

The first game of the day comes from the Jeju World Cup Stadium as Jeju United take on Jeonbuk Hyundai. Jeju United crashed out of the ACL in the group stages, being the only K League side not to progress this season. In the league they hammered Incheon last weekend 4-2 and that will now be their focus. Jeonbuk Hyundai are currently top of the league having 6 wins from 7 league games. They’ve also been strong in the ACL topping their group. I see Jeonbuk winning this one, with a fair few goals.

The first of the 4 o’clock comes from the Incheon Football Stadium as Incheon United host Suwon Bluewings. Incheon United have only 1 win so far this season when they shocked Jeonbuk Hyundai the second week of the season. They’ve picked up 3 draws, but have lost their last couple of games on the bounce. Suwon Bluewings won during the week in the ACL to progress to the knockout stages. In the league they’re unbeaten since the opening day of the season and are firmly in the title race. I see Suwon having the advantage in this one, and taking home a narrow win.

The second 4 o’clock kickoff is between Gyeongnam FC and Ulsan Hyundai. Gyeongnam started the season strongly winning their opening 4 games. However since then they’ve slumped and have only 1 point from their last 3 games. Ulsan Hyundai had a poor start to the season losing their opening 4 games, but since then they’ve bounced back to win 3 games straight and progress to the knockout stages of the ACL. I see a close games here, with Gyeongnam holding on for a draw against a tired Ulsan.