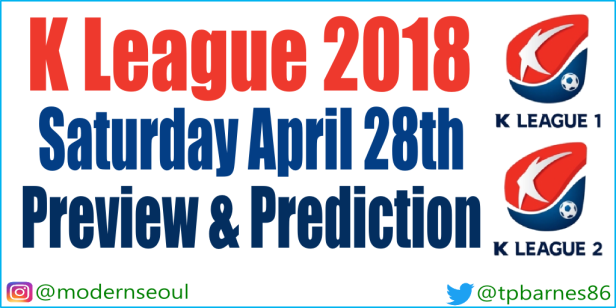 The K League 1 continues on Saturday with the 10th round of the 2018 season. At this point all 12 sides have settled and the league table has taken shape. However there are only 5 games until the World Cup Break and therefore teams will be looking to make the most of the short amount of time. The highlight game on Saturday is between struggling giant FC Seoul and improving minnows Sangju Sangmu.
Previews and Predictions below;

There are 3 games in the K League 1 this Saturday;

The first game of the day comes from the massive Daegu Stadium, as Daegu FC host high flying Jeju United. Bottom of the league Daegu have only 1 win all season and suffer slightly at home due to poor attendances (under 500 during the week). Jeju United on the other hand have 3 wins from 4, with the one defeat coming against run away leaders Jeonbuk Hyundai. Jeju will be looking to kick-on and move into the title race with a win here.

The second game of the day features FC Seoul and Sangju Sangmu two mid-table sides. FC Seoul are struggling this season with only 2 wins from 9 games and a goal a game scoring ratio is partly to blame. Sangju Sangmu have been preforming better with 4 wins from 9, 3 of those in their last 4 games. A come from behind victory on Wednesday highlights their current form. I see a narrow victory for Sangju, who at the moment are performing well away from home.

The second 4 o’clock kickoff is between fast improving Ulsan Hyundai and 10th placed Jeonnam Dragons. Ulsan Hyundai narrowly beat Incheon United during the week to record their fourth win in 5 games. A big change from the side that lost their opening 4 on the bounce. Jeonnam Dragons are struggling and have the worst defensive record in the league shipping 21 goals already this season. They did however beat FC Seoul on Wednesday to lift themselves off the bottom. Despite improvements I can’t see Jeonnam coming away with the victory here and I feel Ulsan will win.

The K League 2 continues on Saturday afternoon with two interesting games. The highlight game is the evening clash between Bucheon 1995 and Busan I’Park. This is the first home game Bucheon have played this season. Predictions here;